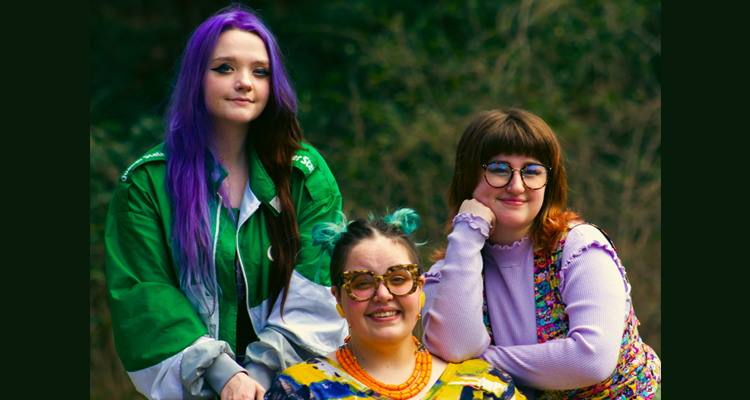 The Ins and Outs of DIY Curation and Freelance Artistry

On the weekend of February 12–13, The Bakery hosted “Oh Baby,” a Valentine’s Day-themed DIY exhibit curated by Abbie Argo, Hannah Hendricks, and Chrysta Avers. Avers is a multimedia artist who makes anti-capitalist, introspective queer art. She started curating shows in college at Oglethorpe University because there were so many talented artists there who had nowhere at the university to showcase their work. Argo was in the same class as Avers and was also active in the Oglethorpe arts community, but did not curate their first exhibit until 2019 with the Y2K and ’90s-themed “Lisa Freak” show at The Bakery. In addition to curating, Argo is a queer nonbinary and disabled “folk pop” artist who primarily creates digital and acrylic work. Hendricks is a multidisciplinary artist whose work explores religious trauma, accessibility to health care for women, and more. She first started curating shows during the last year of her undergraduate program, when she won a grant to work with a nonprofit. She spent the whole year helping to set up exhibits every month and creating a database of local artists to reach out to. Although she has curated before, “Oh Baby” was her first public installation.

The three spoke to Georgia Voice about the ins and outs of DIY art curation, gave a behind-the-scenes look at what goes into local, queer-dominant exhibits like “Oh Baby,” and provided useful tips for others who want to embark on creating their own exhibits.

Local galleries will have open calls for exhibits. Those looking to curate their own exhibit can also approach the gallery directory either through email or in person to pitch their exhibit idea. Local DIY venues are generally the best bet for someone just starting out. Knowing someone at the venue might speed up the process, but it’s not necessary.

Three months is the bare minimum of time needed to really put together a quality show from beginning to end. It’s not just choosing and hanging up art; it’s also making a call for art forms, marketing, making flyers, and more.

When deciding on an exhibit theme, a curator has to decide whether it will be serious or more lighthearted. They must pay attention to the current art trends or what important social issues people feel passionate about and will move them to attend the show.

“I am very passionate about silliness … when I pick a theme. It’s like, does it make me laugh? Will it make other people laugh?” Argo said. “The world is such a serious place to be right now and … art [should] be a direct pushback against that. I think to be silly is a direct rebellion against how shitty Earth is right now.”

There are a lot of costs to DIY exhibition. One typically have to front their own money, and it takes up immense personal time as well. It’s a risk, because whether it will pay off or not in the end is up in the air. When choosing artists, having an open call for art is a great way to ensure diversity and proper representation in a show. A wide variety of artists typically respond, especially to shows that are free.

“When you’re curating something, if you have an excess of applications and you’re gonna have to cut down some, it’s worth making sure that there is diversity in the things that you’re choosing,” Avers said.

The finances of art can be difficult to navigate overall, but there are a variety of ways to assure that you actually get paid for your work. Too often do people approach artists for commissions and then ghost them once it’s time to pay. In order to prevent that from happening to them, Avers has clients pay half when the draft sketch is done and the other half when the full piece is done. Argo always gets their money upfront, and Hendricks charges per hour. Once you decide your rates, be transparent about them. You can even share a price breakdown with the client if you feel like you need to. Limit the number of edits you’re willing to do within your agreed price point. Argo suggests a three-edit limit: “If you want more than this from me, then I’ll have to get more money from you.”

A sliding scale is also a helpful tool to increase accessibility to the artwork.

“Artistic creation has value unto itself,” Argo said. “I think that’s a major issue that a lot of artists are experiencing right now, especially those who are trying to make it their full-time job or even their part-time job. People who don’t understand the time and energy it takes to hone a craft will look down on art as something that isn’t a ‘hard’ medium. It’s just not valued in the way that [careers in] STEM and things of that nature are valued. Artists deserve to be paid for their time and energy; it’s something that we all use every day whether we realize it or not and it’s worth being paid for.”