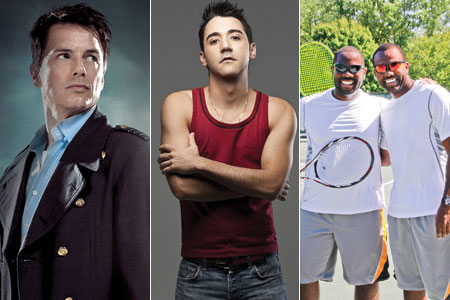 It might as well be called Labor Gay Weekend for all of the LGBT and gay-inclusive events crammed into the three-day holiday. Along with Black Gay Pride packing venues around Atlanta, you can also head out to these other diverse major events.

As over 50,000 fans of science fiction and fantasy hit Atlanta over Labor Day weekend for Dragon*Con, there are plenty of guests and events at the intersection of gay and geek.

One of the biggest names at this year’s convention will be John Barrowman, the actor who portrays the “omni-sexual” Jack Harkness on the BBC’s “Dr. Who” and “Torchwood,” which aired on BBC America and now Showtime.

The character has had a number of homosexual relationships while Barrowman has used his fame to promote gay rights in his native Scotland and across the world. He has produced the documentary “Making of Me” that attempted to determine what caused him to be gay.

While Barrowman has the largest profile of openly gay guests at Dragon*Con, the convention’s roster also includes Nelsan Ellis, who portrays Lafayette Reynolds on HBO’s “True Blood,” and openly gay writer David Gerrold, who worked on the original “Star Trek” and whose autobiographical “The Martian Child,” about an openly gay man adopting a boy who claims to be a Martian, was made into a movie.

There is LGBT-specific programming every day of Dragon*Con, but since most of the panels rely on questions from the audience, gay issues can appear in almost any panel. Outside of scripted programming, the Rainbow Flag Party continues to grow and will be held in the Sheraton on Saturday night.

While the convention requires memberships in order to enter the hotels, the yearly parade Saturday morning is free to the public and shows off one of Dragon*Con’s more interesting features: homemade costumes. Expect plenty to set off your gaydar.

For schedules and venues, visit www.dragoncon.org.

Tennis players from across the country will be in town this weekend for the 25th annual Peach International Tennis Tournament, sponsored by Atlanta Team Tennis Association, the city’s gay and lesbian tennis league.

According to Thanh Doan, ATTA’s president, roughly 185 players will compete in this year’s event. The biggest LGBT tennis tournament in the Southeast, The Peach this year is part of the Masters series of the larger Gay & Lesbian Tennis Alliance, in which players accumulate points by how they fare at each tournament throughout the season.

The Peach offers men’s and women’s singles, doubles and mixed doubles in divisions Open, A, B, C and D.  As well, there’s a 40+ division, offering players that age only one match a day.

“We have a great women’s draw here and the mixed divisions are popular and competitive,” Doan says.

The tournament committee tries to spice it up each year with its opening night draw party and the tournament-ending banquet. Einstein’s will host the 2012 draw party and Hudson Grille will be the site for the banquet, which will include some acknowledgment of the past 25 years.  Most of the actual tennis will be at the DeKalb Tennis Center.

Each year The Peach awards some of its net proceeds to various charities. This year’s beneficiaries are Jerusalem House and the Chris Lester Scholarship Fund.

The Decatur Book Fest is now a Labor Day weekend tradition, drawing thousands to the Atlanta suburb. As in years’ past, the 2012 event features a series of LGBT readings and discussions in cooperation with the Atlanta Queer Literary Festival.

“We work with Decatur Book Fest every year to insure LGBTQ voices are represented,” says AQLF organizer Franklin Abbott, noting, “They approached us about helping to make the festival queer friendly.”

“Divining Divas: 100 Gay Men on their Muses” features Michael Montlack and his newest anthology, along with several contributors, from 11:15 a.m. – 12 p.m. on Saturday at the City Hall Stage.

“Identity and Self in a Shifting Landscape” brings together authors Eric Sasson and Carter Sickels with moderator Elizabeth Anderson of Charis Books & More from 1:45 – 2:30 p.m. at the Decatur Conference Center Auditorium.

On Sunday, “A Different Sort of Family” sees authors Michael Lowenthal and Kerry Reichs with moderator Franklin Abbott from 12 – 12:45 p.m. at the Decatur Library, while “Hybrid Poets” brings Megan Volpert and Laura Mullen and their newest work from 1: 15 – 2 p.m. at the Decatur Conference Center Auditorium.

Visit www.decaturbookfestival.com and choose the AQLF track for more details.

While not part of the AQLF track, gay poet Mark Doty reads on Saturday with other writers included in the “Best American Poetry 2012” collection, and Deardria Nesbitt, who also reads at Charis Books & More for Black Gay Pride, speaks on Sunday at the Emerging Authors Stage.

Labor Day weekend means an extra day of recovery no matter where you like to party. While many of Atlanta’s dance queens will be braving wind and rain at Southern Decadence in New Orleans, our own Jungle, Heretic and Xion are planning events that might make your sinning sisters a little homesick.

Saturday, Sept. 1, Jungle and Carioca Productions bring Mexico’s Isaac Escalante for an Atlanta performance. Escalante, who’s been a DJ since he was 16, is known for his house, tribal and electro house mixes that he spins all over South America and the world.

It’s become standard for the private club Xion to keep the party going after the rest of the Cheshire Bridge corridor closes their doors. Washington DC’s DJ Alex Cohen returns to Atlanta for the occasion, bringing with him the beats that have caught the ear of DJs Chus & Ceballos and the legendary Tony Moran.

Saturday also sees some action for the ladies at Atlanta’s only lesbian bar, My Sister’s Room. Though loosely tied to Black Gay Pride, the bar’s Sin City party also offers some familiar faces from their usual line-up. Expect Vegas-style black jack, roulette and craps with hosts Jersey Moulin and Chase Daniels, DJ Pat Pat on the turntables, and performances by Brent Star, Skyler Lee and more.

Usually closed on Sundays, Heretic opens its doors on Sunday, Sept. 2, for a special Labor Day party with DJ Alexander of Los Angeles.