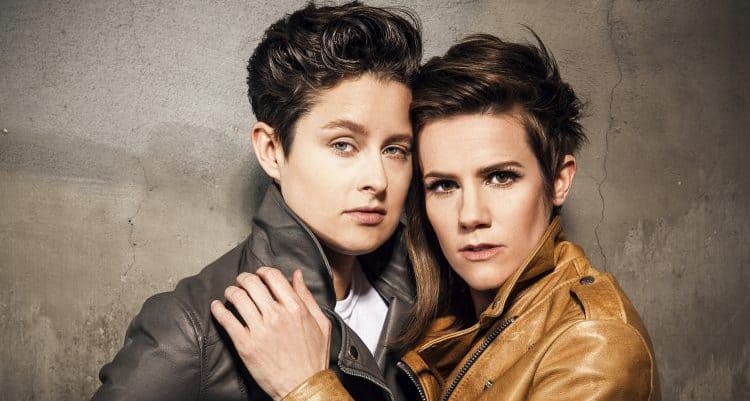 Soon after Cameron Esposito and Rhea Butcher met and began dating in 2012 in Chicago, they decided to follow their show business dreams and headed to Los Angeles, where they quickly found work doing exactly what they’re good at: being funny. Married since 2015, the pair are hitting the road on a bus to co-headline a national comedy tour that will bring them to the Variety Playhouse on Oct. 3.

“The awesome thing about taking a bus tour is that you can drive at night so the travel is built into your sleep schedule,” Esposito told Georgia Voice. “We can get so many more shows in by taking a bus. If we had to fly, it would take us much longer. Plus, who doesn’t want to live like a rock star? Am I right?”

Driving might be more efficient, but what about living in cramped quarters with your spouse for almost a month?

“We’ll have to see how it goes,” Butcher said. “We might have to hitch a car to the back of the bus and one of us rides in that.”

Both women have launched successful independent careers as well as teamed up for projects (the “Back To Back” tour being one of them). Another such project is a television show called “Take My Wife.” It aired on Seeso, a now-defunct comedy subscription channel. The first season received critical acclaim, the second season is complete and they’re now shopping for a new channel at which to call the show home.

One of the things that the duo decided to do was, according to Esposito, “claim our space and then make room for others.” They very purposefully hired all women writers, and nearly half of them were people of color. In season 2, almost half of the roles were played by LGBT actors, eight songs were licensed by eight different queer musicians, wardrobe was done by queer-friendly clothing companies and the set was dressed with art from queer artists. In fact, Esposito and Butcher were so set on being mindful about who they used, they actively sought out experienced writers and actors who needed credits to enter their respective guilds, most of whom were queer or racial minorities.

“For the last couple of years, people have been asking how to change the demographics of people who make shows or who are on shows,” Esposito said. “Rhea and I moved here not really expecting to get the opportunities that we’ve gotten but really ready to work our asses off. We see people like us all over the city who want those jobs. Hollywood is saying ‘Where are the under-represented voices?’ and the under-represented voices are saying ‘Where are the jobs?’ and they’re just not connecting. Once we got the opportunity on ‘Take My Wife,’ we just wanted to take that initiative.”

So do they hope that the people who were sought out and hired this way will continue to pay it forward in their own careers by doing the same as they achieve a certain level of success?

“I am struck by the way that you’re structuring this question because that’s exactly our hope,” Esposito said. “Those are our family values.”

“So often,” she continued, “being gay – our personhood, is argued to be against family values. I was raised in an Italian family where family is everything and you don’t leave people behind. My queer community and marginalized people are my family members. On our best days, we have the ability to empathize in such a way that our family unit is extended beyond our nuclear family. We take care of each other and that makes me so proud to be a part of this community.”

Another way that Esposito and Butcher commingle their queerness with community is through Esposito’s hour-long podcast, “Queery.” The show is formatted where she has discussions with other LGBT people, including Butcher, in the first episode.

“Our fans, the ones who watch our television show and come to see our stand-up, they are from all backgrounds,” Esposito said. “One thing that I have the ability to do is talk to them in a way that is in-group conversation. So often, when I’m interviewed, it’s by a straight person. The questions about my queerness are the same questions – like asking about my coming out story. But when queer people talk to each other, we ask questions like ‘How is your family?’ or ‘What’s going on with your job?’”

Butcher said the podcast feels like a companion to their TV show, and added, “She’s trying to go the step beyond the coming out story. We both value those stories and it helps kids that are trying to come out. But we also want to tell the stories about what it’s like to be a working person and in a relationship and taking risks and how does your being queer affect all of that? Those are valuable conversations to have.”

So what was it like for Butcher to be interviewed by her wife?

“Someone once asked George Harrison what it was like to be in The Beatles,” she replied. “He said, ‘I don’t know. What is it like to not be in The Beatles?’ I guess what I’m saying is we can best be described as ‘The Beatles.’”

The ladies have fond memories of Atlanta, including the time Butcher came to visit Esposito when she was filming “Mother’s Day” with the legendary director Garry Marshall. They booked a local venue and did their stand-up for Marshall, the film crew and the public. Marshall passed away a short time later.

“One thing that makes Atlanta a great place to spend time in is the great local culture all around you,” Esposito said. “And the memories that we have there make us excited to come back!”