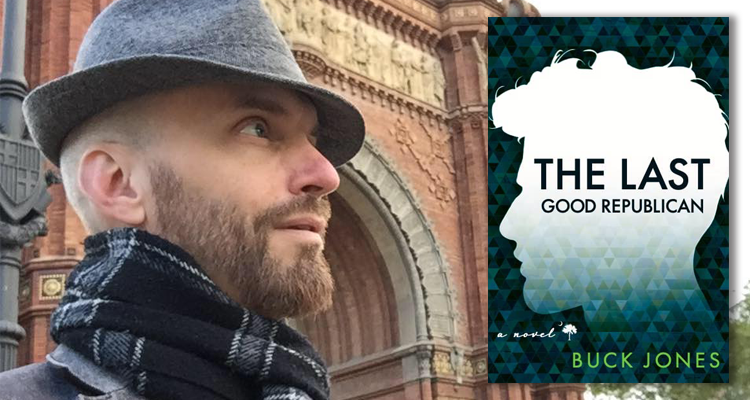 In the America of today, the rift between party lines has grown astronomically: Democrats and Republicans are judged by how strictly they adhere to their respective party’s ideology, which leaves scarce middle ground over which the two can intersect and unite. But author and regular Georgia Voice columnist Buck Jones reminds us in his debut novel, “The Last Good Republican,” that the state of American politics was not always like this.

In fact, prior to the close of the 1960s, Jones finds that the party system worked in a reversed, more fluid way than it does today.

“The Last Good Republican” focuses on this time of party and ideological fluidity through the mythic character of Carter Ridge. An idealistic Republican politician in 1960s South Carolina, Carter and his wife seek to bring in a new, progressive age to the Southern state by ending segregation and enacting Carter’s visionary political program, The Good Life. Much in the vein of FDR’s New Deal and JFK’s New Frontier, The Good Life seeks to bring universal health care, public control of utilities, and fully funded public schools — in Jones’ words, The Good Life is “Bernie Sanders writ 1960s.”

Carter’s vision for South Carolina may stray from what might be expected of a Southern Republican, and Jones wants his readers to recognize this. “The Last Good Republican” seeks to push the notions of what it means to be both a politician and a leader — to be a representative of a party and a representative of a people — and how America went from a place where Republicans would promote universal health care to one where doing so could destroy a conservative’s career.

“When I was writing the novel, I wanted it to be a vehicle to push people’s thinking about the realm of what is possible,” Jones said. “Because the realm of possible is what we make of it. If we want to live in a society that is dominated by crazy ideologues on one side and a kind of herd of kittens on the other — that’s a choice that’s been made and reinforced with each successive election cycle. So, I wanted to push the boundaries of what people’s understandings are about how we got to where we are today.”

What pushes these boundaries even further than Carter’s Good Life program is his identity as a gay man. During his campaign for governorship, Carter falls in love with one of his staffers, a cadet named Gabriel. After Carter wins, this newfound love grates against not only Carter’s future ambitions to create change on the national scale, but also his marriage to his brilliant wife Margot.

For Jones, Carter’s sexual identity works in tandem with his role as a liberal Republican in the novel. Just as directions of political parties begin to shift near the end of the 1960s, Carter’s desire to exit the closet and embrace his sexuality grows stronger as he becomes a more prominent figure in the public eye. This sense of fluidity and directionlessness in terms of both political and sexual identity feels both foreign in a time of strict party lines and familiar when these rigid parties and categories fail to capture all a person is.

Moreover, Carter’s motivation to create a Good Life stems out of his sexuality. As a closeted gay man, Carter hopes to create the Good Life for others, but doing so forces him away from Gabriel. As Jones said, “It’s anything but a good life. On the inside, he is desperately lonely both socially and sexually … For every step he takes up that political ladder, he feels he’s taking a step down from his own self-fulfillment, from his own good life, having someone to love him who he could love in return. That dichotomy of wanting to give people what you can’t have is what drives the story of the novel.”

Indeed, “The Last Good Republican”  functions by exploring dichotomies between political parties, the public self and private self, and the mind and heart. But Jones also subverts and deconstructs these dichotomies, bringing opposite ends of a spectrum together and allowing a refreshing sense of connection across political and sexual lines that is much needed in these divisive times.