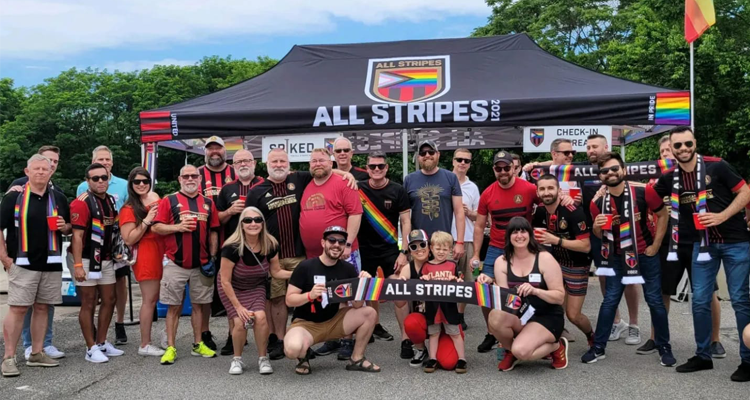 Catching Up with All Stripes, the Queer Supporter Group for Atlanta United

All Stripes was created to “support Atlanta United FC and eliminate discrimination by engaging members of the LGBTQ+ community to create an inclusive atmosphere in the soccer culture,” according to their mission statement. They’re one of six official supporter groups for the team, all of which have a different niche. I spoke to All Stripes President Matthew Mitchell to find out more about the organization’s history and Atlanta United’s LGBTQ inclusivity.

Answers have been edited for clarity.

What is the origin story for All Stripes? Why was it necessary to have an Atlanta United fan organization specifically for LGBTQ individuals?

I wasn’t there for the origin, but basically, it’s about providing a safe space for members of our community, members of the queer community. There is sometimes a stereotype that a lot of the queer community doesn’t really engage in sports, so the ones that do don’t always have the best experience with other fans and other organizations. That wasn’t necessarily the cause for the formation of our group, we just chose to be provocative as opposed to reactive to help ensure that the members of our community could feel safe and welcomed in the environment.

What does All Stripes do and what does membership money go toward?

At the start of the pandemic, a lot of our extracurriculars were down, but we did do a couple of web series educating people about the Black Lives Matter movement and other areas that, even in the queer community, some people struggle with. More recently, we’ve been planning more in-person events such as drag shows, partnering with the organization “Soccer in the Streets” to play a tournament and raise money for them, creating a queer presence at Atlanta United events that would normally not be queer spaces, and marching in various parades.

The donations help to run the organization, and we give back a lot to the community as well. Each year we donate money to different partners. For example, this year one of our partners is “Soccer in the Streets.” Aside from that, we don’t get a lot of money donations, usually we get donated spaces to host drag shows and watch parties for away games. Georgia Beer Garden is one of those places for us, which happens to be queer-owned. Some other sponsors include Urban Tree Cidery and Atlanta Brewing Company.

I saw that the organization has a membership now! What are some perks of the membership?

Memberships have a one-time annual fee of $25 for adults, $10 for kids. It gives you an “official part” of the organization. You’ll in turn receive newsletters, a $5 discount on tailgate tickets (which occur at every home game except for Wednesday ones), a membership scarf (which has a different design each year and is a collector’s item), and access to tickets in the supporters’ section of the stadium to specifically sit with other All Stripes members. The tailgates act as an inclusive space where people can congregate before the show to feel comfortable to be themselves and to feel safe in what can be a very masculine space. We don’t make any money off of the tickets we sell to our members; we sell them at face value in order to, again, provide that safe space for our community. Having that bloc in the stadium is so impactful even to nonmembers; at a recent game, a mom whose child had just come out as trans came up to us and told us how much it meant to her child to see that representation at a place that they expected to see it. Every halftime we do a queer meetup behind the Terrapin bar and take a huge picture with all of us together so that even if you’re not able to make it to the tailgate and even if we can’t all sit together, we’re still able to interact with each other and take up space.

How has Atlanta United affirmed its LGBTQ support?

They have always been cordial, but they have more recently truly embraced us. There was never pushback, but over the last two to three years, there has definitely been a lot of engagement with us. On their end, it wasn’t the fact that we were queer, it was the fact that we were a new group and they needed to see if we were able to function as an organization. If you’ve noticed, in the past, they did not have a Pride night … they had a “Unity” night. That has now been changed. They’ve really been trying to work with us, I’ll give you a little example. They wanted to schedule the Pride match in October to celebrate Atlanta Pride and the only home game in October is the same Sunday as the Atlanta Pride Parade and they didn’t catch that when they scheduled it. The moment I brought it up to them, they immediately jumped into action and tried to fix their mistake. The only match in June, which is normally when everyone else does Pride, is on Juneteenth … we were like, no, we can’t do that, and ultimately agreed to host a big queer watch party on June 25 with Atlanta United’s assistance. We’re going to invite the other five supporter groups (Footie Mob, Resurgence, Terminus Legion, The Faction and LA 12), our partners and some queer youth organizations to come and watch the match with us. There will also be a drag show and other engaging activities. We’re also talking to them to provide a safe way for people to go from the Pride Parade to the game if they choose to and also to potentially put up a blowup screen showing the game at Piedmont Park. Those last two things are not confirmed yet, but yeah, they’re really partnering with us to help make sure we have a great experience.

One cool thing is that our membership is still open, and we have many ways for people to get involved and volunteer. We have lots of committees for people to be a part of. We would love for people to get involved if they want to, we really need help with our social media. It’s important to note that the other officers and I are all volunteers, so if someone wanted to help with social media, that too would be a volunteer position. We have just under 300 members right now, so we have a pretty large representation at those matches. We are constantly trying to do better and do more to show that we are here for everyone. We are open to anyone who wants to help create an inclusive atmosphere.