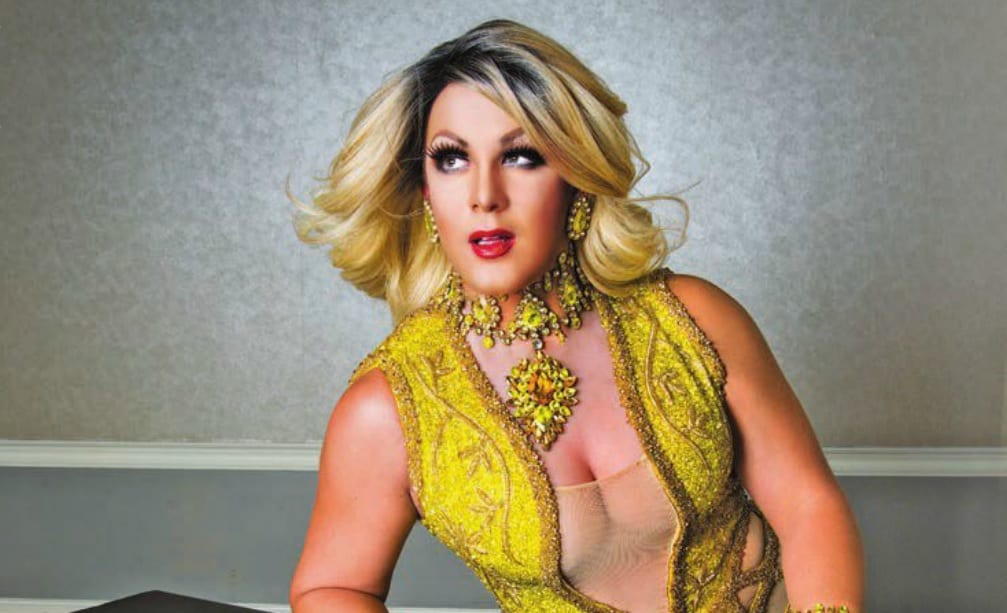 When Elea tells people that she does drag, she says they’re surprised for two reasons.

“They tell me that I look like such a boy out of drag that they can’t really imagine what I look like. They probably think, ‘Oh, even if you do do drag, you probably look busted.’” Newsflash: she doesn’t.

But there’s also that second reason.

“I think they’re shocked too knowing that I have a degree in education but then I do the opposite of that and I put on dresses at night,” she says laughing.

Yes, after she’s done gracing the stage at LIPS Atlanta at night, you can often find Elea working part-time as a teacher the next day. And that’s when she’s not busy running her drag queen accessory store Elea’s Closet. We sat down with Elea one recent day at the Georgian Terrace Hotel to talk about how she got her start, her future plans and more.

So how did you get into this crazy, wonderful career?

So I was in a theater production at OnStage Atlanta back in 2006 and I was 15 years old and I met a drag queen there that was in the audience and I just said, ‘We should hang out.’ So I started hanging out with her—her name was Rogue.

At that point there was YouthPride and they would have a party every month and they would allow any of the youth to perform if they wanted to. So I got my home-ec teacher in high school to make me my first costume and I did Britney [Spears]. I would lie to my parents and tell them I was staying with the cast in Atlanta but really I was staying with the drag queens and we would go out to the clubs and I would sneak out and do drag, so that’s how I started.

Which Britney song did you do that first time and how did it go?

It was ‘Toxic.’ I thought it went amazing. I followed all of her dance moves and everything but looking back on it, I looked like a hot mess. The way I wore the costume and my makeup and everything was just terrible [laughs].

So what made you get back on the stage and do it again after that?

After doing that I just felt, in a way, like I could be Britney for a little bit. So this life of you walking in the club and everyone looks at you and stares, it’s just the attention. I really, really like the attention and the wow factor of it. I just kept going back to that and wanting more.

And is drag a full-time job for you?

Drag is one of the three jobs that I have. I’m a tutor, a teacher two days a week part-time. I work at LIPS four days a week and then I have my own business as well, it’s a drag business. I make jewelry. I make the prosthetic breast plates, all that good stuff.

What do you think are the biggest misconceptions that people have about drag queens?

I think a lot of the misconceptions would be that we’re all bitches and they think that we all have big egos and just want to be the best and don’t care about other people. And they think that drag queens are not trustworthy, that we’re drug addicts or drug dealers. And it’s not really the case.

So what’s next for you? Where do you see yourself in five years?

I see myself probably still at LIPS. I just love LIPS. Somebody told me once, ‘LIPS is so cool because they came there to see you.’ You know sometimes in the gay bar, I feel like that the guys are inconvenienced by the drag show and they kind of give you the cold shoulder. But at LIPS they’re so excited because they’ve never seen anything like that and it’s really positive.

So I think I will continue to be at LIPS. It’s very lucrative for me. I want to be on “Drag Race.” I auditioned this past season but never heard anything back. I think I would be great for reality TV. I feel like my life as a drag queen is really different because I don’t just do drag.