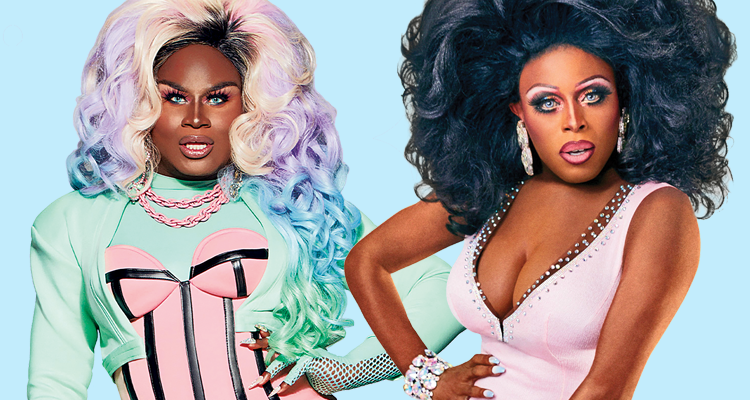 The thirteenth season of the well-loved LGBTQ franchise, “RuPaul’s Drag Race,” just premiered, and the uber talented and fabulous lineup of 13 queens includes two from Atlanta. Tamisha Iman and LaLa Ri are representing the gay mecca of the South on the show. The two differ greatly in style and experience — Tamisha is a more classic pageant queen who has been in the industry for 30 years, while LaLa is only three years old and errs on the edgier side of drag — but the two were acquainted years ago before reuniting on the show. In fact, Tamisha, the matriarch of the massive Iman dynasty, was the first person to put LaLa into drag.

We sat down with the two Atlanta queens to discuss their drag, Atlanta’s influence, and what fans can expect from the show. Quotes have been edited for length and clarity.

You’re representing Atlanta on season 13 of RuPaul’s Drag Race alongside LaLa Ri, who is your drag daughter. How exciting was that to find out?
I was ecstatic, quite naturally. Let me explain the situation about LaLa being my daughter: I was the one to put LaLa first in drag. She was getting ready to go to an audition at LIPS Atlanta … and she got a booking at a club later that night. It’s hard to get on the show, so for LaLa to be so determined within only a couple of years and get recognized by the network, I was really proud to see her effort recognized.

You’ve done drag for 30 years now. Have all of those years been spent in Atlanta?
Yes, Tamisha was birthed in Atlanta. I’m originally from Birmingham, Alabama, but I moved here when I was seven. So, I’m a peach, ya know? [laughs]

And how has the Atlanta drag scene influenced your drag?
The older drag scene did influence my drag. What I learned about drag at the time was that drag isn’t just about taking the stage and performing. It was a platform for you to be a voice in the community. You are one of the ones people will gravitate towards because you are an entertainer. You’ve got the weight of the community on your shoulders. It was more than just a ‘kicking your heels up and doing songs’ type of thing. It was a job.

So do you think being in the game so long and having this older drag experience gives you an edge over the other girls on season 13?
I can’t say that. Drag has evolved! Keep in mind, I’m from the dinosaur years … now you’ve got computers, internet, [and social media]. It took me 30 years to get to this point; somebody can watch YouTube and next week they can be on Drag Race! For me, [drag has been] a journey. I got to experience that journey, and I hope a lot of the new girls understand that they are now experiencing that journey. Even though many of them have had overnight success, they still have a long way to go in the industry. Just enjoy the ride.

Absolutely. How would you describe your individual drag to people who are going to watch this season?
My drag is different. The show has been known for a lot of camp girls. In Atlanta, we try to represent the look and feel of real; the role model [for my drag] is my mother, you know what I’m saying? That’s just a Southern thing! I don’t do crazy crazy drag — I can, but it’s more of a Southern belle, Hotlanta style. My drag is the look and feel of a real woman with the calmness of an adult and the excitement of an old broom still able to compete with these young cubs.

Is there anything you’d like to tell fans who will watch the show?
This is a reality show. There are going to be high and low emotions. I just want people to understand that we all risked our lives to bring the next generation of Drag Race to the people because we filmed during a pandemic. Just don’t allow the show to make you form opinions about the girls [as people]. At the end of the day, whatever transpired in the moment was just that: in the moment. We all love each other, and we all support each other. But it’s a reality show, so enjoy it for what it is.

Tell me how you felt when you learned you were going to be on Drag Race! I’m sure that was really exciting!
Yeah, it was super exciting! I couldn’t believe it at first because it was my first time auditioning. I didn’t think I was going to get chosen, honestly and truthfully [laughs]. When they made the phone call, I was in disbelief. There were so many emotions, but to sum it all up: excited!

And you’re representing Atlanta with Tamisha.
Yeah. She was my original drag mother, but we actually reunited on the show.

How was that?
It was cool! It was cool to not only have somebody else from Atlanta but someone that I had personal ties to.

So, you’ve only been doing drag for about three years, but I’m sure you’re already pretty familiar with the Atlanta drag scene. How do you think it’s influenced your drag?
Atlanta is the mecca of drag. When you want to be a drag queen, come to Atlanta. These girls, the legends in this town, do not play when it comes to drag. Of course, Atlanta is pretty pageant-heavy so it’s very strict. I’m not a pageant girl, but it’s groomed me to be the queen that I am now: my professionalism, my makeup, my stage etiquette, and my work ethic.

If you’re not a pageant queen, then how would you describe your drag?
LaLa Ri is definitely a show girl, hands down. I’m really inspired by Beyonce, I like stage productions, over-the-top glam, choreography, dancers, lights, all of that. Lala is very sassy, a little ratchet [laughs] but most importantly, she’s everyone’s favorite homegirl. That’s why I feel like I can be America’s Next Drag Superstar. I’m very approachable, everyone seems to love LaLa Ri. She’s an exciting character.

In the grand scheme of things, you’re still very new to drag. Do you think being a “baby” drag queen gives you an advantage with some fresh perspective and energy, or do you worry it will be a disadvantage in the competition?
I don’t think it’s a disadvantage at all. I do agree that it does give me a fresh perspective towards things. I’m more excited for it. I’m hungry for it. I want it so bad, and I’m going to go for it at all costs. [My drag just has] an edgier feel to it, a younger, fresher, edgier feel.

Is there anything you’d like to tell viewers before they watch the season?
Be ready for a slay and a gag [laugh]. I’m just excited to be representing my hometown, Atlanta, Georgia, and all the queens that came before me.

You can watch “RuPaul’s Drag Race” season 13 on VH1 Fridays at 8pm or the day after online at vh1.com/shows/rupauls-drag-race.