‘These are their words, we are transmitting their language’ 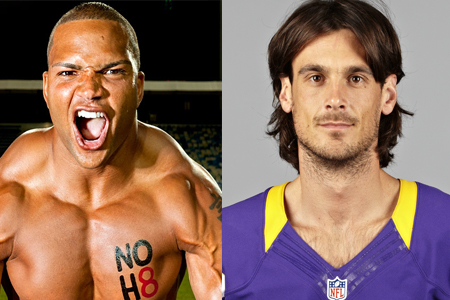 There’s an Atlanta angle to the friend-of-the-court brief filed by NFL stars Chris Kluwe of the Minnesota Vikings and Brendan Ayanbadejo of the Super Bowl Champion Baltimore Ravens urging the Supreme Court to sack California’s Proposition 8.

No, nothing to do with the Atlanta Falcons for fans still stinging from the team’s lost chance at this year’s Super Bowl. But one of the attorneys who filed the brief on behalf of the NFL players is an Emory University professor.

Timothy Holbrook, Emory’s Associate Dean of Faculty and a professor of law, along with his friend Minneapolis attorney John Dragseth worked with the two players to file the brief.

“John is a longtime friend of mine. He’s straight and he knows I’m gay and had an interest in same-sex marriage,” Holbrook said.

Dragseth had contacted Kluwe through Twitter to gauge his interest in being part of a brief to the Supreme Court. Read Dragseth’s account in The American Lawyer.

Holbrook’s partner, Namon Huddleston, contacted Ayanbadejo via Facebook. And the two football players were quickly on board.

“Social networking does something good for once,” Holbrook said with a laugh.

There was no doubt, of course, because the two players have been outspoken in support of marriage equality in their states and Ayanbadejo purposely used his time in the spotlight at the Super Bowl to bring awareness about same-sex marriage.

Holbrook, a huge sports fan and athlete himself, stressed that the two players wrote much of the brief themselves — the attorneys simply cleaned up language to fit a legal brief as well as added legal citations.

“These are their words. We are transmitting their language,” Holbrook said.

“They really were the first drafters. They had ideas of what they wanted to say. When it came to the message, it was from the players,” Holbrook said.

But no “lustful cockmonster” language in this brief, Holbrook said.

Holbrook said the legal brief does not hold any dramatic legal theory, but it does show a change in public opinion that is important.

“The idea of the brief is you wouldn’t think pro sports players especially in the NFL would carry this torch but that’s why it is important,” he added.

“There aren’t openly gay athletes and that means there is something amiss in that culture and when you have two players who are in that culture willing to speak out … it helps show the intersection of sports and gay marriage,” he said.

Holbrook said he and Dragseth are looking to have more athletes sign onto the brief after the fact and plan to file those additional names with the Supreme Court on March 24 or 25.

“Both of these athletes are courageous. It has been an honor to work with them. They are straight and they don’t have a horse in the race, but they sense inequality,” said Holbrook.

From the Kluwe and Ayanbadejo brief:

Sports figures receive a celebrity status that influences a large majority of the American population. For far too long, professional sports have been a bastion of bigotry, intolerance, and small-minded prejudice toward sexual orientation, just as they had been to racial differences decades earlier.

That is finally changing, and changing drastically. The NFL, NHL, MLB, and NBA, at the league level,team level, and individual level, are finally speaking out against homophobia and intolerance of LBGTQ individuals. More and more of us realize that using demeaning slur words like “faggot,” “queer,” and “gay” can have serious, negative consequences. Not necessarily consequences for us. Instead,consequences for the children and adults who look up to us as role models and leaders. Consequences for children and adults who mimic our behavior when they interact with others. And consequences that can be severe, long-lasting, and not infrequently lead to suicide and other serious harm.

Several other Georgia organizations have signed onto amicus briefs urging the Supreme Court to strike down Prop 8 in California as well as the Defense of Marriage Act.

The Stonewall Bar Association, an organization of LGBT-supportive legal professionals, and Georgia Benefits Counsel, which helps same-sex couples with documents like wills and powers of attorney, signed onto the same brief as the Atlanta Bar Association, a mainstream legal group. The brief was filed last week in the Prop 8 case, known as Hollingsworth v. Perry.

Georgia Equality signed on to what is dubbed the “Red State Brief.”

The Red State Brief comes from 28 organizations advocating for LGBT people in areas of the country, like Georgia, which are unlikely to advance marriage equality without a push from the federal level.

“This brief is about arguing on behalf of the millions of Americans who feel hopeless that legislation on a state level will ever advance their cause,” said Utah Pride Attorney and former Bush Administration US Attorney Brett Tolman.

A press release from the Stonewall Bar Association states:

As Georgia’s only bar association focused on diversity and inclusion of LGBTQIA individuals within the legal profession, we believe that Proposition 8 and DOMA are discriminatory and unconstitutional. We also believe that gay, lesbian, bisexual, transgender, queer, and intersex individuals should receive equal treatment under the law and that the legalistic designations of “domestic partnership” and “civil union” are patently inferior to the revered institution of marriage. For these reasons, and the other reasons enumerated in the amicus brief, we believe that Proposition 8 and DOMA should be struck down as unconstitutional, and that the Supreme Court should find that excluding same-sex couples from marriages causes harm to LGBTQI individuals and perpetuates discrimination.

The Supreme Court will hear arguments on Proposition 8, California’s constitutional amendment banning same-sex marriages, on March 26, while arguments on the Defense of Marriage Act, the 1996 law that forbids the federal government from recognizing same-sex unions, will be heard the following day. The outcome of the cases will shape the fight for marriage equality for same-sex couples for years to come.

Below, read the full friend of the court brief filed by the NFL players: