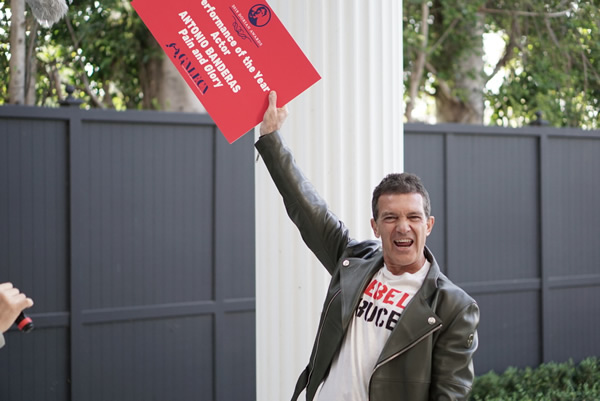 After a career spanning nearly four decades and including numerous gay roles, Antonio Banderas will finally be in contention for his first Best Actor award at this Sunday’s Oscars, for his heart-wrenching performance as a lonely and drug-addicted gay director in Pedro Almodóvar’s semi-autobiographical “Pain and Glory.”

The Spanish-born Banderas has embraced gay characters virtually from the start of his career, when he played a gay Islamic terrorist in Almodóvar’s 1982 film “Labyrinth of Passion.” He would go on to greater gay acclaim for his steamy performance in Almodóvar’s “Law of Desire” in 1987, and later appeared as Tom Hanks’ lover in “Philadelphia” in 1993, as well as the queer vampire Armand in 1994’s “Interview with the Vampire.”

Banderas faces stiff competition at the Oscars this year from Best Actor favorite Joaquin Phoenix in “Joker,” but he’s already taken several trophies for his heart-wrenching “Pain and Glory” performance, including a Best Actor Dorian Award from GALECA, the Society of LGBTQ Entertainment Critics. Banderas made a special surprise appearance to accept his prize at last Sunday’s Dorian Awards toast in Hancock Park. The Oscars will be handed out at the Dolby Theatre in Los Angeles Sunday night. ABC will air the hostless broadcast.

Banderas’s well-deserved nomination is the shining exception among 2020’s Academy Award selections, which are undeniably less queer this year than they’ve recently been. Oscar’s queer presence had flourished in the years since “Moonlight” won the Academy Award for Best Picture in 2017, first with “Call Me By Your Name” and “A Fantastic Woman” receiving nominations in 2018 (not to mention “The Shape of Water,” which many saw as a queer love story, and “Lady Bird,” which featured a gay character). Last year was arguably the queerest Oscars ever, with both Best Actor and Best Actress awards going to thespians in gay roles (Rami Malek in “Bohemian Rhapsody” and Olivia Coleman in “The Favourite,” edging out Melissa McCarthy in another lesbian role in “Can You Ever Forgive Me?”), as well as queer representations (and sensibilities) in “A Star Is Born” and “Mary Queen of Scots.”

This year’s Oscar nominations, then, came as somewhat of a queer letdown, completely overlooking several LGBTQ-themed films that should (or at least could) have made the cut, including the gorgeous French lesbian romance “Portrait of a Lady on Fire” and the acclaimed coming-of-age (and lesbian-charactered) comedy “Booksmart,” both also Dorian Award winners last weekend. A few bright lights did shine through. Despite the Oscar snub of Taron Egerton for his acclaimed and Golden Globe-winning performance in the Elton John biopic “Rocketman,” “(I’m Gonna) Love Me Again” from that film, written by John and longtime collaborator Bernie Taupin, is nominated for Best Original Song.

Many see “Little Women” and its rebellion against the trappings of heteronormativity as a queer movie, and it’s nominated for six Oscars this year, including Best Picture, though shamefully, Greta Gerwig was snubbed for Best Director. And while it’s not an LGBTQ role per se, Renée Zellweger is the heavy favorite to pick up the Best Actress Oscar for her titular role in “Judy,” the biography of beloved queer icon Judy Garland. Tangentially, “Bombshell,” which includes “SNL’s” Kate Mckinnon in a minor lesbian role, is nominated for Best Makeup and Hairstyling.

A bit more tangentially, a couple of actors who’ve appeared in prominent LGBTQ roles before are nominated for Oscars this year. “Bombshell” Best Actress nominee Charlize Theron is a previous winner in the category for her chilling portrayal of serial killer Aileen Wuornos in 2004’s “Monster,” while Leonardo DiCaprio, nominated this year for “Once Upon a Time…in Hollywood,” played queer poet Arthur Rimbaud in 1995’s “Total Eclipse.” George MacKay, star of this year’s likely Best Picture winner “1917,” was also the star of the 2014 LGBTQ-themed British movie “Pride.”

For a queerer 2020 awards show than the Oscars, check out the 35th Film Independent Spirit Awards, airing live from Santa Monica at 2 p.m. this Saturday, Feb. 8. IFC subscribers can stream the show on ifc.com, while others can watch the show live on Twitter via @ifc or @filmindependent. Here, “Portrait of a Lady on Fire” is nominated for Best International Film, while “Booksmart” is nominated for Best First Feature (for Olivia Wilde), and the lesbian-themed Emily Dickinson romance “Wild Nights with Emily” is nominated for the John Cassavetes Award, for best feature made for less than $500,000.