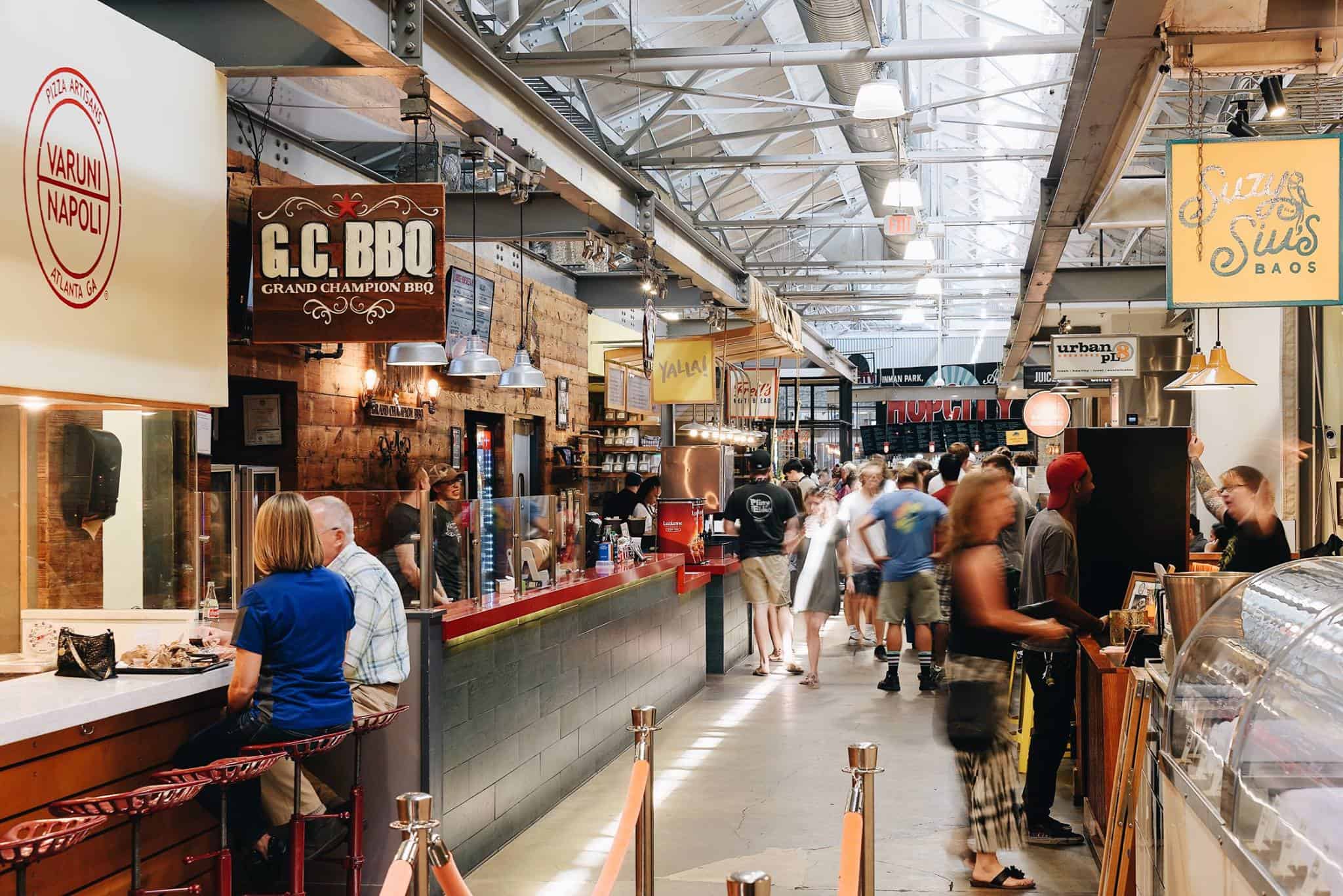 The idea of a food hall — a destination filled with both sit-down restaurants and grab-and-go food stalls — isn’t new to Atlanta. Sweet Auburn Curb Market has been a mainstay downtown for years, and visitors began flocking to Krog Street Market and Ponce City Market the moment their doors opened. Those latter two opened doors for other food halls to follow suit. The Canteen, a “micro food hall,” is the latest to arrive, and three more are slated to open within the next two years.

“Having counter service appeals to people, but it’s not a food court like you have traditionally in a mall where it’s a bunch of chains,” said Ben Johnson, co-owner of The Canteen and a host of restaurants in the city. “There is sort of a twin phenomenon going on. There is this increase in quality of counter service, and the idea of grouping a lot of them together because you get some economies of scale there.”

Another appeal to a food hall is the ability for a group to each order something from a different food stall and gather in the communal area to eat together.

After the historic Atlanta fire of 1917, farmers gathered to revitalize an area to sell livestock and produce. In 1924, they got a permanent, fire-proof building named the Municipal Market of Atlanta. Though the city’s black citizens were allowed to shop inside, they were segregated to the outdoors if they wanted to have a vending spot, placing them near Auburn Avenue — once called “the richest Negro Street in the world.” It’s that history that gave the market its nickname as Sweet Auburn Curb Market in the 1990s.

Today, Sweet Auburn is a must-eat establishment for many working in the downtown area and visitors alike. Its food hall is home to a number of restaurant stall vendors as well as fresh produce and meat — an homage to the Municipal Market of old.

Whether they’re biking in for a cool-down snack or bringing a group together for lunch and shopping, Ponce City Market quickly made a name for itself as the vanguard of Atlanta’s BeltLine. Opening a few months after nearby Krog Street Market, Ponce City Market is both food and retail destination.

“The food hall also functions as a market,” said spokesperson Laura Fryer. “Each restaurant and stall sells a selection of goods representative of their menu so that visitors can bring home the experience: think South African rubs and chutneys from Biltong Bar or dried chiles from Botiwalla.”

Atlanta’s first modern food hall opened in November 2014, and at the time, had a concept that was relatively new to the US, said Merritt Lancaster of Paces Properties, which owns Krog Street Market.

“A lot of people thought we were completely nuts,” he told Georgia Voice of the combined food hall and retail establishment. “It kind of snowballed once everyone understood what the concept was and saw people of interest signing up. It kind of ballooned.”

Bar Mercado is the newest restaurant at Krog Street, and its sister food stall Recess is slated to open soon. The faces behind Decatur restaurant Kimball House also have plans for an eatery in the market.

“There’s quite a few kind of new changes that have just happened or are coming,” Lancaster said. “We’re excited about them. We’re 100 percent occupied at the moment and we’re focused on making sure the market remains competitive.”

Just around the corner from Krog Street Market is Irwin Street, a more compact dining destination. Irwin Street prides itself on providing artisan-sourced to-go food and casual dining. Visitors can pop into Irwin St. Coffee & Tea for a pastry and cappuccino, dart by Jake’s for a scoop of homemade ice cream, sip on cinnamon hot chocolate from J.D. Rothschild’s and peek at the food and gift market.

The Krog Street area is also home to three restaurants owned by noted chef Kevin Rathbun: Rathbun’s Restaurant, serving up modern American dinner fare; Spanish-style wine and tapas destination Krog Bar; and Kevin Rathbun Steak, which was named one of the best steakhouses in the US this year by Travel + Leisure.

Owned by the culinary team that runs The General Muir at Emory Point and both Fred’s Meat & Bread and Yalla at Krog Street Market, The Canteen was inspired both by the larger food hall concepts and the space it now occupies.

“It was sort of a re-thinking of that idea, taking those aspects of a walkup that work well in that small space,” said co-owner Ben Johnson. “Because of the foot traffic and the nature of the folks over there, we’re going to get a very heavy carry-out business, as opposed to the food hall — people get it and eat it there because going to the food hall is their destination. We want to be part of people’s daily life more than a traditional food hall would be.”

The Canteen is set up with fresh-pressed juices and bagels available during breakfast, lunch and dinner options and a bar in the evening. On Sundays, a newly launched brunch offers combined menu favorites from each restaurant.

Coming to Midtown in February 2019, The Collective aims to be a 10-option food hall as part of the 20,000-square foot Coda building in Tech Square. According to the Atlanta Journal-Constitution, The Collective will include “chef-driven, unique eateries featuring a sampling of cuisines from across the world with communal seating areas” that open into a large outdoor “living room.” Attempts to reach the leadership team were unsuccessful as of press time, but the AJC revealed that diners will be able to choose from healthier food stalls, international street food and American staples, as well as a coffee shop. Plus, plans include a full-service centrally located bar — and open carry permitting.

The next food hall headed to Atlanta will be across the street from Saint Mark on Peachtree Street. With an “opening soon 2017” banner across the top of its website, this regional cuisine-inspired dining spot is ready to welcome customers quite soon, though an official date has not been announced.

Caravaca Market’s “top-notch, gourmet food” concept is the brainchild of author, TV host and chef Harry Pagancoss. It will include a provisions market with grab-and-go meals and drinks, a craft beer and pizza eatery, Harry Bakes Café, a wine bar and more. A flower shop and newsstand are also planned for the venue.

“Enjoy a glass of wine or craft beer with your friends as our team serves up delicious small plates of regional cuisine — made with the freshest ingredients and infused with an undeniably global sensibility,” Pagancoss’ welcome letter reads on the website homepage. “We want all of our guests to come away with a new appreciation for the sublime possibilities life puts in our path.”

Midtown’s famed Colony Square building is under redevelopment, and a food hall called Main & Main was named as the anchor point. According to Atlanta Business Chronicle, Main & Main will have close to a dozen restaurants, a beer garden and will serve as the setting for hundreds of annual events at the building. Charleston, South Carolina, chef Steve Palmer — owner of Oak Steakhouse — will be “chef curator” for the concept. His restaurant Sukoshi will be the first tenant.

The first phase of the re-imagined Colony Square will open next year, with Main & Main coming summer 2019.