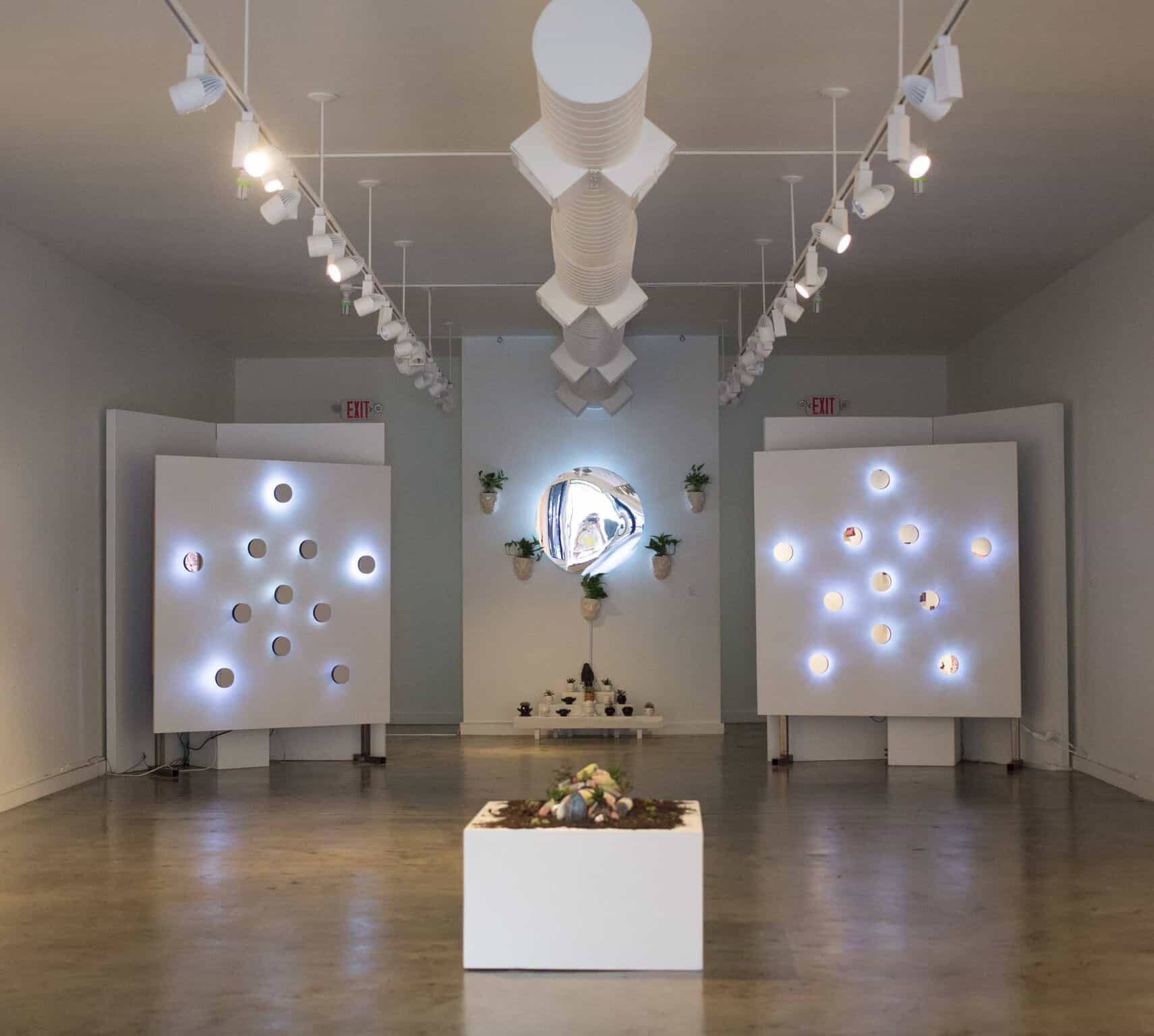 Life and Death at The Gallery

Catharine Romero-Perla
Art
September 14, 2018
The exhibition was to remind viewers of death, the idea that we are all made of stardust and will eventually have to be returned to Earth. Live music, however, brought life into The Gallery and reminded listeners to, while we have the time, live.
The closing night of Martin Ferreyra and Pablo Gnecco’s joint exhibition “Somos Estrellas/We Are Stars” at The Gallery was a smash. The showing takes inspiration from the Day of the Dead celebration of Mexico. Through paintings, ceramics, and installations of light and sound, the exhibition gave the audience a reason to reflect on what could be the reunion with our ancestors to keep their precious memories alive.
Martin Ferreyra, born in Argentina, takes influence from the Mesoamerican era of art, the likes of which can be seen in Chac Mool, a famous Mesoamerican sculpture typically depicted as a figure lying on his stomach holding offerings to the gods. Ferreyra’s take is interesting in that it features Chac Mool on his hands and knees making an offering to the people. Another prominent subject of Ferreyra’s is Mexico’s national dog, the Xoloitzcuintli, which acts as a guide to spirits making their way toward Mictlan, or the Land of the Dead. His works beautifully marry Mesoamerican history in his paintings, ceramics, and the use of bright pastels to add a unique twist.
Pablo Gnecco is an experimental artist and motion designer from Colombia. His light-based installations contrasted with Ferreyra’s pieces that directly connected with the theme. The light and darkness of his pieces were representative to me of life and death. Without light, there is no darkness; without life, there is no death. But his works could also be taken to mean that the individual is light who, when faced with darkness, will never succumb.
Meanwhile, ItsPatSoul’s R&B and soul-inspired vocals soothed as they reverberated throughout the showing. His lyrics filled listeners with hope. His set ended with, “I’m Just Trying.” In a room full of what felt and looked like young creatives, it resonated. When Kiya Lacey took the mic, her presence at the front commanded everyone’s attention. One listener remarked that she gave off Evanescence vibes mixed with R&B. Hommeboy took the stage last, where he welcomed everyone to dance with him. His sound takes influence from 80s New York. He premiered “OtherWorldly” (O.W), his lyrics playing with Disney’s “Zenon: Girl of the 21st Century.” Hommeboy’s explosive and positive energy cultivated a crowd comfortable enough to let loose, dance, vogue, and circle the gallery. In that moment everyone was a star.
The Gallery at Wish opened in February of 2018 as an art complement to Wish ATL, a popular boutique for streetwear and sneakers. The gallery opened to provide artists and customers of the boutique with a place to be introduced to established and up-and-coming creatives within the community. The Gallery has exhibited Martha Cooper, Pastiche Lumumba, Gerald Lovell, and many others.
On that night, however, “Somos Estrellas/We Are Stars” invited death to the party and we danced with her, unafraid.