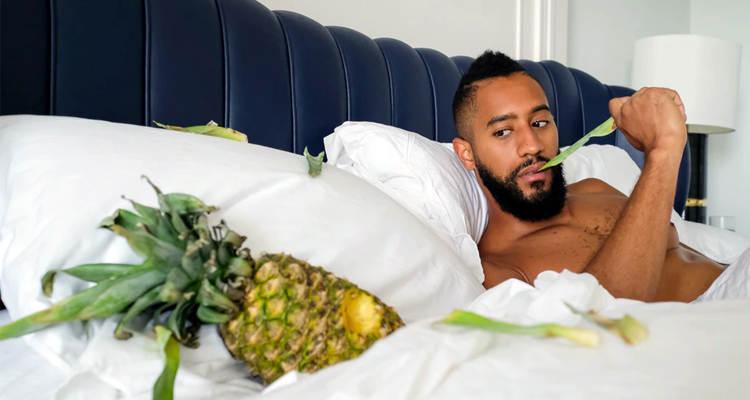 I have often decried the lack of political music in today’s popular culture. There aren’t any anthems like the ones in the 1960s that supported civil rights or protested the Vietnam War. Surely, the political environment is just as fraught with the ever-accelerating regressive agenda of the Republicans, with their MAGA minions turning back America’s hard fought reproductive freedom, voting rights, and soon the inevitable shoving back into the closet of the LGBTQ community.

Into this void comes the talented Atlantan, Neo soul artist who goes by the name of kAREEM Adonis.

With the release of his debut album, “Pineapple Juice,” Adonis not only serves up the perfect summer playlist to listen to poolside or at the beach, but also provides some intellectual candy to savor for its subversive political message. On the opening track, “Blackness,” we have Adonis at his militant best, with its deep hook that reverberates in your head long after you’ve moved on to another track.

This album is more than just a stirring of consciousness for the slacktivists who think getting involved requires no more than clicking “like” on social media or signing a meaningless online petition that is used to harvest email addresses for future fundraising. The album is also a meditation on relationships and sexuality. The eponymous track, “Pineapple Juice,” is a fun celebration of sensuality, while “Tammi” is destined to be a favorite for drag queens; it’s a funky anthem that begs to be mimicked by both listeners and lip-syncers alike.

That’s not to say that this debut isn’t eminently listenable for lovers of R&B. “Light Me Up” and “Real Love” are destined to be classics for lovers of deep grooves reminiscent of the greats in the genre. Indeed, Adonis has many inspirations when it comes to his music. I caught up with him recently for an interview, during which he said that he grew up loving the music of his parents (he grew up in Queens, New York). Artists such as Prince, Missy Elliott, and Babyface are present throughout this remarkably complex album that brings together so many different threads.

The origin for “Pineapple Juice” is, like so much of our lives in recent years, the pandemic. COVID-19 came out of nowhere. With no warning, it cost him his job and his sense of community, leaving Adonis unsure and anxious. Watching the murder of George Floyd and the social upheaval that followed sent him into a tailspin of pain and anger. At the same time, his personal life was spiraling out of control. He had been in a ten-year relationship, engaged to be married, and it came to a crashing end (the album’s final song, “Never Again,” is a beautiful tribute to that fateful chapter in his life). He admitted to his partner that he was developing strong feelings for another man. That other “relationship” soon ended as well. Adonis found himself alone, unemployed, and in lockdown, fading into a deep depression. He became terrified of his own thoughts and experienced countless moments of hopelessness. He didn’t see a way out and had no will to fight.

Out of the ashes of that horrible year of COVID and the murder of George Floyd came one of the biggest social justice movements in history. It blossomed in hundreds of places across the country and around the world (even here in Paris we had our own massive protests in support of Floyd and against police violence). Gradually, Adonis saw his family, friends, and a sea of global strangers pick themselves up every day and brave not only angry streets but also a pandemic, just to make their voices heard. Their bravery and sacrifice filled him with hope. He reached out to friends — and a licensed therapist — and started talking to people. He began rebuilding himself, and ultimately, he turned to writing the music for this album.

“Pineapple Juice” is an aural cocktail of love, pain, anger, and healing. It is Adonis’s truth and vision. Many times, as he put pen to paper, he found myself in tears. He thought of Floyd, the serial killings of his trans brothers and sisters, Matthew Shepard, Ahmaud Arbery, and the challenges so many minority groups face daily. Not to mention, of course, his own personal mistakes and adversity.

Though “Pineapple Juice” was created at the darkest moment in his life, it is intended to be a light at the end of the tunnel. Some of what he experienced is unique to him, but he believes its message is universal, and that many can relate to what he felt — and still feels. “I want to take people on a journey with me,” he said. “I want them to hear my story and feel my emotions. Most of all, though, I want to inspire the minds and touch the hearts of those who listen.”

Find kAREEM Adonis on Instagram @kareemadonis as well as on Spotify, Apple Music, and SoundCloud.