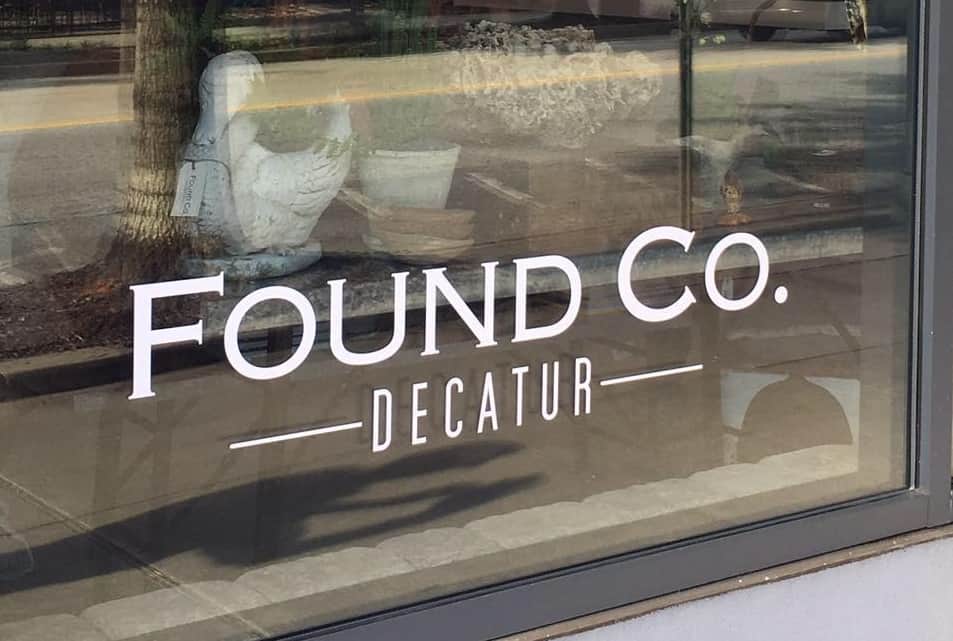 Step into the stylish store at 335 W Ponce de Leon Avenue in Decatur, and you’re immediately ushered into a playground for the senses.

Scents of Siberian fir waft gently through the air from high-end candles and diffusers tucked in nooks and crannies around the 1,400 sq. ft., industrial space. Eye-catching crystal geodes glint from floating shelves along the periphery while on a central, rustic wood banquet table, vintage-style magnifying glasses and cloches full of exotic plants beckon shoppers. Jazz music accompanies the cozy environment, made complete by a rear sitting area that is part display and part invitation to stay a while.

If you’re not careful, you might forget that you’re in a store at all – and that’s just fine with Jason Shadix, co-owner of Found Co. Decatur, an avant-garde home store Shadix and Alan McArthur hope will transform the way people shop for and decorate their homes. Described as a reservoir for “collected objects and [an] apothecary for home and body,” the organic-themed shop full of distinct items is designed to get people to slow down, take in the sights and hopefully take home an item that brings natural, outdoor-inspired beauty indoors.

“We’re not really a store that you’re just going to run in and run out,” said Shadix, who loves to see customers linger among the shelves full of minerals and vintage finds. “It’s really meant to be an experience.”

That experience includes hand-curated and locally produced items chosen to complement items you already have in your home. Indeed, the store is best described as an eclectic pastiche of items, with an earthy theme. Think lots of glass, wood, minerals and amazing plants. The selection is purposely mixed old and new, sleek and homey, practical and whimsical.

“There’s a kind of a movement called wabi-sabi – appreciating the intersections in things,” Shadix said, referencing the popular Japanese aesthetic focused on embracing simple, authentic beauty. “We try to embrace that.”

It’s a boldly unique concept for a store, yet in the nearly four months since their opening along a busy retail strip in downtown Decatur, it’s proven a hit.

Some of that is no doubt due to home decorating trends. One need only look at a few design magazines or websites to learn that “organic glamour” – artisanal finds, botanical themes and natural materials – is one of the hottest emerging trends among interior designers and shoppers alike. But Shadix, who lives with his husband in Atlanta, believes his own design touch plays a role too.

“I like to create little vignettes,” said Shadix, who pulls heavily from the tailored aesthetic in his own Grant Park bungalow.

Found is arranged to look less like a store and more a like a botanical-themed den, with marble cutting boards and baskets, brass candlesticks and rustic fleur-de-lis finials scattered about waiting to be, well, found.

“It’s not like things are set up on a shelf like little soldiers,” said Shadix, who thinks the more “organized chaos” approach encourages shoppers to discover more. “That’s our uniqueness, kind of the way we merchandise.”

A business 25 years in the making

The store that hopes to transform the way people decorate their homes in Decatur was actually born in Athens, when Shadix and MacArthur were roomies at the University of Georgia 25 years ago. Back then, they were budding students who fantasized about owning an artsy coffee shop full of books, cards and lamps. Shadix said they dreamed of calling it Eclectic Electric.

Then came graduation and life, taking McArthur to Tucson and Shadix on to a successful career in special events planning. McArthur would eventually return to Athens to open a spa, and not long after, the men revived their college fantasy of owning a cool boutique.

“Over the years it changed and morphed,” Shadix said. “We always kept the conversation going.”

Last year, the pair decided to get serious and finally pull the trigger on the idea that had been so many years in the making.

“Both of us were finally in a place at the same time to do it,” said McArthur, who had recently sold his business and found that Shadix also had more time in his schedule to commit to the effort. “We had the money and we started looking around and we found a place.”

They instantly knew Decatur was the perfect spot and lucked up on a storefront in a residential building with lots of foot traffic.

Since then, the pair has been settling into the space, trying to figure out the best way to advertise their unique wares and helping customers navigate through the eclectic selection.

A recent Sunday afternoon found Shadix in the rear of the store putting finishing touches on fragrant, handmade holiday wreaths. The rain had cut down on shoppers along the strip, but that didn’t discourage Shadix from feeling their audience is on the rise.

“We have to build it, and they will show up,” he said. “People are finding us – no pun intended.”