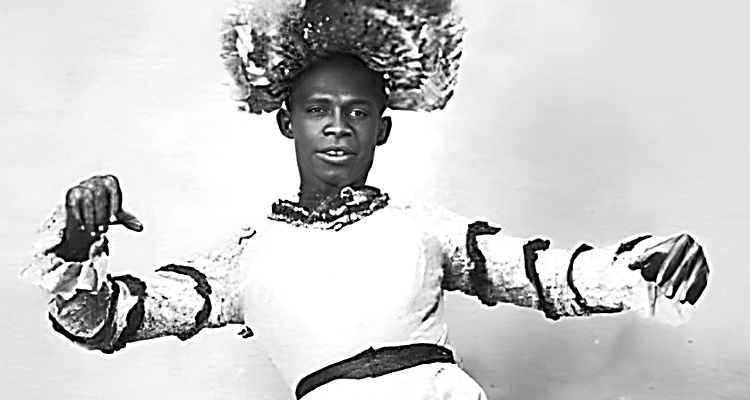 *Edit: This historical photo of drag performer 'Mr. Brown' is often confused for Swann. The article was published incorrectly labeling this photo as Swann. / Historical photo

The first drag queen was a queer activist born enslaved.

Born into slavery in 1860, William Dorsey Swann is the first known queer activist in the U.S. and the first person to describe themselves as a “queen of drag.”

Yet despite holding such an incredible title, the world had largely forgotten about him until January 2020, when The Nation published an article about Swann by researcher Channing Gerald Joseph.

Joseph explained in the article that he discovered Swann about a decade earlier by stumbling upon a Washington Post article from April 13, 1888, titled “Negro Dive Raided. Thirteen Black Men Dressed as Women Surprised at Supper and Arrested.”

The article described a police raid on a drag ball, from which several attendees escaped, while others physically fought back. Ultimately, officers arrested 13 men, whose names were printed in the paper.

“You is no Gentleman,” Swann boldly said to the police lieutenant leading the raid.

An article from the same day in The Evening Star was titled “A Drag Party Raided” and even describes Swann as the “Queen.”

This instance of Swann and other attendees fighting back against the police is the first documented case of physical queer resistance in the U.S., and it happened almost a century before Stonewall.

Swann was arrested again in 1896. This time he was sentenced to 10 months in prison for holding a drag ball and the false charge of “keeping a disorderly house,” a charge usually applied to brothels. There has been no evidence uncovered to suggest Swann ran a brothel or engaged in sex work.

Swann was educated and even wrote a letter defending his character and demanding a pardon from President Grover Cleveland, who refused. In doing so, Swann became the earliest known American activist to use the U.S. political and legal system to defend queer rights.

Since his discovery, Joseph has done more research on Swann and the early drag balls of D.C. He plans to release a book titled “House of Swann: Where Slaves Become Queens.”

He discovered that the House of Swann’s balls were similar to those of today, with mothers and “queens” leading close-knit groups. He noted that terms regularly used today like “sashay across the floor,” “vogue,” and “strike a pose” appeared in articles from the 1930s.

These drag balls were often spread by word of mouth at places like the YMCA and consisted of formerly enslaved people, cooks, coachmen, butlers, and other working people, mostly people of color. Swann’s balls usually included singing and dancing and featured a cakewalk, where a hoecake was awarded to the best dancer.

In his The Nation article, Joseph cites an article from the Washington Critic on January 14, 1887, that reads:

“Six colored men, dressed in elegant female attire, were arraigned in the dock at the Police Court this morning on a charge of being suspicious persons … They nearly all had on low neck and short sleeve silk dresses, several of them with trains … corsets, bustles, long hose and slippers, and everything that goes to make a female’s dress complete.”

The 1887 party took place at the home of Swann’s lover, Pierce Lafayette, who was previously enslaved by the vice president of the Confederacy. It was during this time years prior that Lafayette’s relationship with Felix Hall marked the first ever recorded same-sex slave relationship.

The 1887 arrest captured the attention of hundreds of onlookers and countless newspaper readers across the nation, and the large publicity meant an increased risk for Swann and his queer family to gather.

However, Swann was used to attention, having made the news multiple times over the years, starting in 1882, when he was arrested for stealing party supplies.

Despite the risk, the drag community continued to gather, with two regular attendees being Swann’s younger brothers. Long after Swann’s retirement from the drag scene in the late 1890s, his brother Daniel J. Swann continued to host parties and provide costumes for the drag community until his death in 1954. Unfortunately, there are no known photographs of William Dorsey Swann, and the year of his death remains a mystery.

Leaving behind an incredible legacy of activism and drag excellence, Swann has directly shaped the art of drag and the course of history. We owe it to him to make sure his story is never forgotten again.