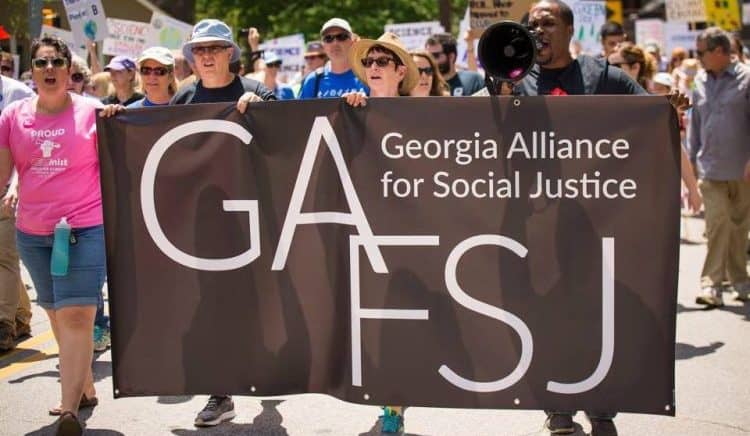 On Friday, April 28, the National Association will hold a meeting at the World Congress Center. President Donald Trump and Georgia Sen. David Perdue will be among those in attendance.

Just a few miles down the road, a different group of Georgians will be meeting, too. And they have a message for the NRA.

“It’s really just a quiet and visual demonstration of the impact of gun violence in Georgia and in America. There are approximately 90 people who die every day form gun violence,” Janel Green of the Georgia Alliance for Social Justice told Georgia Voice. “We’ll have 90 people laid out in Woodruff Park to demonstrate that, and we will lay there for 16 minutes, symbolizing the fact that every 16 minutes in America, another person dies from gun violence.”

The peaceful protest and staged die-in was organized by a host of groups, including the Pride Fund to End Gun Violence, Gays Against Guns, Better Georgia and the Georgia Alliance for Social Justice.

Green’s organization evolved from the Atlanta women’s march in January, and she is proud to say it continues to collaborate with other groups for causes they’re passionate about.

“The LGBT groups [involved in the protest] are not organizations that we had previously worked with and we are so excited they wanted to join in,” she said. “We see ourselves as an alliance in bringing together groups to more effectively amplify the messages.”

Green said the main idea of the protest is to raise awareness of Georgians’ desire for commonsense gun laws, and to fight back against misleading rhetoric purported by the NRA and supported by the president. She said many believe that those who want better arms legislation “want to take people’s guns away.”

She said over the last two decades, the NRA “evolved into this organization that pushes this extremist ideology and rejects any efforts to combat gun violence.”

Some of the specific gun laws the protest raises awareness of include reducing magazine size, opposing campus carry — a bill that sits on Georgia Gov. Nathan Deal’s desk — and opposing the proposed elimination of regulations on gun silencers.

Friday’s protest will be followed on Saturday by a rally against gun violence, which features speakers and more interaction with the public.

“We’re still trying to get the attention of our senator, David Perdue, who refuses to meet with our constituents,” Green said. “We want the NRA to see, we want the elected officials to see that there is a large contingency of Georgians and Americans as a whole who are not supportive of that ideology and we want to be visible.”

She wants to make it clear that the biggest desire is for room at the table to have a conversation.

“We are genuinely interested in having meaningful dialogue with people who have differing views than we do,” Green said. “As long as people with these extreme views refuse to even engage in dialogue, how are we ever going to move forward?”