Beck also plans to write a new memoir with her best friend, Wendy Kelly, who wrote a book titled “Buji and Me” about how pets can change our lives. Beck’s current book, “Warrior Princess,” represents only a short part of her life, she said. The new book will include a more holistic approach to her life and beliefs. 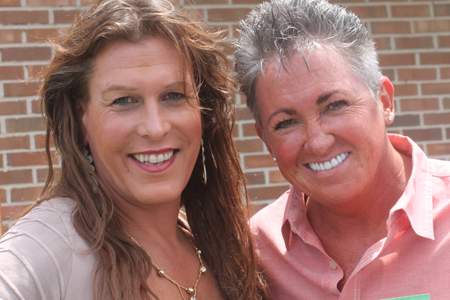 Beck said to look for plans of her announcing a bid for office closer to 2015. She said she is currently beginning to speak at engagements on behalf of the U.S. State Department, a position she said she is qualified for because of her 20 years in the military. She is also enjoying meeting other LGBT activists and speaking out at various equality events in Florida. She comes back to Atlanta in September for the annual Southern Comfort Conference.

She said she was raised to be someone to give back to their country — whether as a teacher, a police officer, a Red Cross volunteer or a doctor.

“During Desert Storm, the way I grew up is that when government calls you for service, you serve. You can serve in different capacities … I chose the military,” she said.

“I saw the SEALS as the lifeguards of the military,” she said. “The missions are very strategic — I didn’t want to go in there and be a stormtrooper. We try to do things in that positive way. We would try to rescue a hostage or capture that one person that is strategic in the overall mission,” she said.

“I happened to join the part of the government force that is the hammer, the military. I would be very less likely to use the military [as a politician]. For all of us to win there doesn’t have to be a loser,” she added.

During her 20 years in the military, Beck saw much combat in numerous countries around the world and earned a Purple Heart and Bronze Star.

Beck has also been busy working with numerous civil rights group and speaking out on transgender issues. While she has always known she was transgender, she said she didn’t come out sooner because she loved her life as a Navy SEAL.

Beck says her journey continues. Coming out as transgender is one aspect of who she is. And while she wishes the spotlight wasn’t on her as much as it, she now feels it is a duty for her to use what influence she has to educate as well as learn from others.

“It’s like I’m on a new mission,” she said. “A lot people are listening about this because I was a Navy SEAL then maybe weren’t before.”