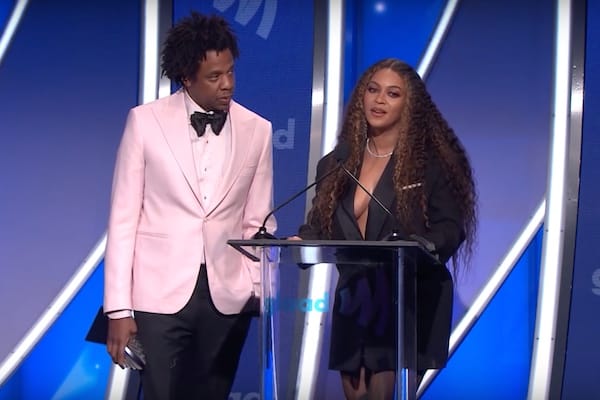 Beyoncé and JAY-Z were honored with the Vanguard Award at the 30th annual GLAAD Media Awards on Friday in Los Angeles. The Vanguard Award “is presented to media professionals who have made a significant difference in promoting equality and acceptance of LGBTQ people.”

“RuPaul’s Drag Race” alum Shangela gave a lip-sync performance to a medley of Beyoncé’s hits including “Bootylicious,” “Partition,” “Single Ladies” and “Flawless.” Beyoncé could be seen cheering in the crowd and gave Shangela a standing ovation.

OMG. @itsSHANGELA IS PERFORMING A BEYONCÉ MEDLEY IN FRONT OF BEYONCÉ AT THE #GLAADAWARDS. pic.twitter.com/VNS0oGurxF

Beyoncé and JAY-Z were then given an introduction by Morris Singletary, Janet Mock, Ty Hunter and Lena Waithe before taking the stage to accept the award.

“We were not expecting any of those incredible presenters and just super honored and overwhelmed. I have already cried. I put a run in my stocking from Shangela,” Beyoncé began. “I would say that one of the most beautiful memories from our tour was looking out every night and seeing the hardest gangster trapping out right next to the most fabulous queen, full out, respecting and celebrating each other. That was dope! That’s the beauty of great partnership, connecting people who at first glance seem worlds apart.”

She continued: “Whether it’s our fans, or our family, the LGBTQI community has always supported us and lifted us up. We’re here to promote love for every human being, and change starts with supporting the people closest to you. So, lets tell them they are loved. Let’s remind them they are beautiful. Let’s speak out and protect them. And parents, let’s love our kids in their truest form. We would like to request that we continue to shift the stigma in this community, especially the stigmas in black families, towards accepting queer black and brown family members.”

Beyoncé also honored her late uncle who died of HIV.

“‪Lastly, I want to dedicate this award to my Uncle Johnny, the most fabulous gay man that I have ever known…who helped raise me and my sister. He lived his truth. He was brave and unapologetic during a time when this country wasn’t as accepting, and witnessing his battle with HIV was one of the most painful experiences I’ve ever lived,” she said. “‪I am hopeful that his struggle served to open pathways for other young people to live more freely. LGBTQI rights are human rights. To choose who you love is your human right. How you identify and see yourself is your human right. Who you make love to and take that ass to Red Lobster is your human right.”

JAY-Z also honored his mother, Gloria Carter, in his speech who came out as a lesbian on his song “Smile.”

“Life, this journey, is filled with highs, lows, and a lot of learning. This is a momentous night. I also want to, because I didn’t get to do it last year, honor my mother, who received the award last year, and follow in her footsteps of spreading love and acceptance and her beautiful speech at the end of the song “Smile,” for her allowing me to tell her story,” JAY-Z said. “So, I want everyone to acknowledge that, and her strong message of love who you love and souls that connect.”