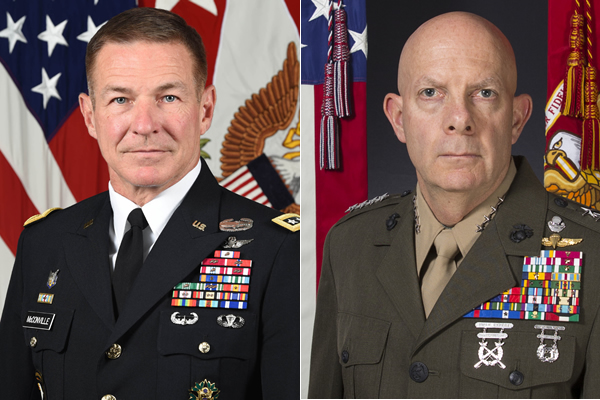 Chief among Joseph Biden’s plans to reverse President Trump’s anti-LGBTQ policy initiatives is undoing the transgender military ban, but with at least two military service chiefs on the record as being hesitant — if not outright opposed — to the change, that may require a more substantial effort than expected.

Reversing the transgender military ban, which was implemented administratively under Trump, could be done easily with another administrative change. After all, the policy of open service initiated by former Defense Secretary Ashton Carter under former President Obama could simply be duplicated.

However, if the military service chiefs resist, a change that could in theory be done on Day One during a Biden administration may be prolonged.

Douglas Wilson, who served as Pentagon chief of public affairs under Obama and was the first openly gay person confirmed by the Senate for a senior defense role, predicted in an email to the Washington Blade “there would likely be some pushback,” but said it wouldn’t be impenetrable.

“Before the Trump ban, there had been general overall acceptance of the Ash Carter policy, which — while initially internally controversial — was essentially accepted over time,” Wilson said. “[I’m] not sure in these times if this would be the issue on which chiefs would fall on their swords in opposition to Biden’s change. I would think they would be expecting it if Biden wins.”

Unlike other presidential appointments, who customarily resign their positions at the end of a presidential administration, the service chiefs under Trump would continue serving in their roles if Biden wins the election and stay in place after he takes the White House.

A look at the confirmation hearings for the military service chiefs reveals their mixed views on transgender service. The Army chief of staff is on the record in opposition to transgender service and the Marine Corps commandant has expressed hesitation. Meanwhile, the uniform leaders for the Navy and Coast Guard have signaled they’d welcome transgender service. In between is Chair of the Joint Chiefs of Staff Gen. Mark Milley, who has chosen his words very carefully.

“In my experience, a service member with a medical condition who has been non-deployable for multiple periods of significant duration could negatively impact readiness – especially in a high-demand, low-density [military occupational specialty],” McConville said. “Non-deployable soldiers can negatively impact a unit’s force readiness, especially smaller units or in highly specialized areas with a very small population.”

Those remarks — generalized and based on a hypothetical framework — fly in the face of comments before that time from service chiefs, who each affirmed to the Senate Armed Services Committee that transgender service didn’t impair unit cohesion.

Hesitant about transgender military service in his confirmation hearing was Marine Corps Commandant Gen. David Berger, who in April 2019 hedged by denying any negative impact on unit cohesion, but expressing concern about “gender dysphoria,” often a defining characteristic of being transgender.

Chair of the Joint Chiefs of Staff Gen. Mark Milley chose his words carefully during his confirmation hearing in July 2019 under questioning about transgender service from Sen. Mazie Hirono (D-Hawaii).

“I don’t believe there’s anything inherent in anyone’s identity to prevent them from serving in the military,” Milley said. “It’s about standards, not an identity.”

Although Milley said he sees no problem with transgender troops, he also tempered that by saying service members need to meet the military standards, which currently bar transgender service.

“I think that, in my view, we’re a standards-based military, as you point out,” Milley said. “We’re concerned about the deployability and effectiveness of any of the service members.”

“So if you meet the medical, behavioral health, the conduct standards and physical standards, etc., then it’s my view that you should be welcomed in,” Milley added.

The Navy appears to have the service chief most amenable to transgender service. Chief of Naval Operations Adm. Michael Gilday affirmed in August 2019 during his confirmation hearing he sees no problem in any capacity with allowing transgender people in the military.

“I am unaware of negative impacts on unit or overall Navy readiness as a result of transgender individuals serving in their preferred gender,” Gilday said.

Just last week, the Navy granted its first-ever waiver under the transgender ban to an officer facing discharge, allowing her to stay after she sued to remain in the service. The waiver, however, was granted by the acting secretary of the Navy, who would be expected to resign at the end of the Trump administration.

“I am not aware of any disciplinary or unit cohesion issues resulting from the opening of the Coast Guard to transgender individuals,” Schultz said.

Although the Coast Guard technically isn’t a service because the Department of Homeland Security, not the Defense Department, has jurisdiction over it, it has a tradition of following the personnel policy set by the Pentagon, including on transgender service.

The incoming Air Force chief of staff, Gen. Charles Brown, is in the middle of his confirmation process and hasn’t yet publicly commented on transgender service. The service chief for the newly created Space Force, Chief of Space Operations Gen. John Raymond, wasn’t asked about the issue before his confirmation.

Will Biden put his money where his mouth is with his campaign pledge and lay down the law with the service chiefs?

Jamal Brown, national press secretary for the Biden campaign, reiterated the presumptive Democratic nominee’s commitment to the transgender community in response to the question from the Washington Blade.

“Joe Biden believes that ‘bigotry is bigotry, prejudice is prejudice, and hate is hate, no matter where we find it,’” Brown said. “Transgender Americans should have the right to serve the country they love and, in this time of a global pandemic, our nation should be tapping the talents and skills of every person who is willing to serve.”

Brown also affirmed Biden would direct the Pentagon to implement openly transgender service, but didn’t disclose anything about process or timing.

“As president, Biden has made clear that he will direct the U.S. Department of Defense to allow transgender service members to serve openly, receive needed medical treatment and be free from discrimination,” Brown said.

Tension between a U.S. president and the military service chiefs over LGBTQ military service has occurred before. In 2010, when legislative repeal of “Don’t Ask, Don’t Tell” was moving through Congress, Obama left implementation to then-Defense Secretary Robert Gates broadly speaking, but on one occasion made his position clear with the service chiefs.

At the time, not all the service chiefs were on board with repeal of “Don’t Ask, Don’t Tell.” Marine Corps Commandant James Conway opposed allowing openly gay people in the military and warned gay and straight service members shouldn’t share housing.

But Obama delivered the service chiefs an ultimatum: Accept the change or resign.

As revealed in a 2014 report from BuzzFeed, then-Coast Guard Commandant Adm. Robert Papp recalled Obama being unwilling to compromise with service leaders during a meeting in 2010 over “Don’t Ask, Don’t Tell.”

“We were called into the Oval Office and President Obama looked all five service chiefs in the eye and said, ‘This is what I want to do,’” Papp said. “I cannot divulge everything he said to us, that’s private communications within the Oval Office, but if we didn’t agree with it — if any of us didn’t agree with it — we all had the opportunity to resign our commissions and go do other things.”

There were no resignations. When “Don’t Ask, Don’t Tell” was repealed and Obama, then-Chair of the Joint Chiefs of Staff Adm. Mike Mullen and then-Defense Secretary Leon Panetta certified the military was prepared, each of the services implemented openly gay service. Conway, still in charge of the Marine Corps, conceded afterwards there were no problems with the change.

“I cannot speak to what a President Biden would enact, but I would encourage a first step to return to the policy that was in place and working at the end of the Obama-Biden administration allowing open transgender military service,” Simpson said.

Simpson added she thinks a President Biden would be a strong commander-in-chief and would direct the military staff accordingly.

Would the service chiefs keep to their views they expressed on transgender service during their confirmation hearings or would they agree to Biden’s plan to implement it? The Space Force didn’t respond to the Blade’s request to comment and spokesperson for the Navy and Air Force flat-out declined to comment.

Maj. Craig Thomas, a spokesperson for the Marine Corps, told the Washington Blade the service would implement any change directed under a new administration — but would provide its recommendation if asked by defense leadership.

“The simple answer is if the DOD changes the policy, the Marine Corps will abide by it,” Thomas said. “If the secretary of defense seeks input from the services, the Marine Corps would provide its recommendation. However, once a decision is made, we follow the guidance set forth by our civilian leadership.”

Asked a follow-up question on what the recommendation of the Marine Corps would be, Thomas declined to answer the hypothetical and said as of now “there is no recommendation or additional discussion.”

“Moreover, in my previous response I was speaking generically about DOD passing any new policy,” Thomas said. “Sometimes they ask for input and sometime it’s not needed. The key point is once a decision is made, the services carry it out to the best of their abilities.”

Lisa Novak, a Coast Guard spokesperson, said the service will follow the policy set by the Pentagon, but also praised transgender service members.

An Army spokesperson deferred entirely to the policy set by the Pentagon on the issue.

“The Army executes Department of Defense military personnel policy, including policy on military service by transgender persons,” the spokesperson said.

Nonetheless, current policy — which the Pentagon implemented after Trump tweeted in 2017 he’d ban transgender service members “in any capacity” — requires the discharge of any service member who’s diagnosed with gender dysphoria, a defining characteristic of being transgender, or seeks transition-related care. Individuals with a history of gender dysphoria can only enlist if they’re willing to serve in accordance with their sex designated at birth.

The policy has an exemption to allow transgender service members to continue serving if they came out when open service was instituted in 2016 under the Obama administration. Additionally, the policy allows senior defense officials to grant waivers to transgender individuals facing discharge wishing to enlist in the armed forces.

Jessica Maxwell, a Defense Department spokesperson, declined to comment on the speed with which it could reverse course and implement transgender service under a Biden administration.

“The department speculates on neither future election results nor potential changes from those results,” Maxwell said.

At the end of the day, if Biden is elected president, he would become commander-in-chief and the service chiefs would be bound to his orders. Any Biden order to lift the transgender military ban would supersede their objections.

Aaron Belkin, director of the San Francisco-based Palm Center, said the implementation of transgender military service — regardless of whether Biden or Trump is in charge — would be easy to accomplish.

“All of the service chiefs testified in 2018 that inclusive policy for transgender personnel worked, and the very good regulations spelling out that policy remain in effect, even though they have been superceded by Trump’s ban,” Belkin said. “Because inclusive policy remains in effect, the next administration can seamlessly and immediately end the Trump ban by canceling the regulation that contains it. Literally, this should take a day or two, and it doesn’t matter who’s running DOD.”