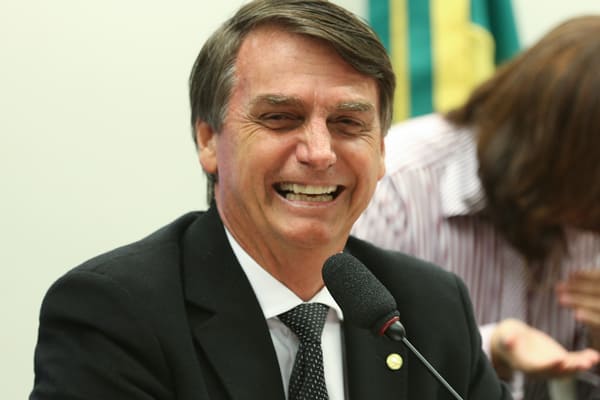 Bolsonaro Cancels US Trip after Outcry from LGBT Activists

Brazilian President Jair Bolsonaro has cancelled an upcoming trip to the U.S. amid growing outrage among LGBT activists and other groups.

Bolsonaro was scheduled to accept an award from the Brazilian-American Chamber of Commerce at its gala that is scheduled to take place at the New York Marriott Marquis in New York on May 14.

The American Museum of Natural History last month announced it would no longer host the event with Bolsonaro.

Delta Air Lines is among the companies that withdrew their sponsorship of the event because of Bolsonaro’s participation. GLAAD also called upon the Marriott Marquis not to host the gala at which Bolsonaro had been scheduled to receive the “Person of the Year” award.

The statement, which CNBC reporter Ryan Ruggiero posted to his Twitter page,described “deliberate attacks from the mayor of New York and the pressure of interest groups on the institutions that organize, sponsor and host the event annually.” The statement also said Bolsonaro cancelled his trip to the U.S. after he consulted with his government.

Bolsonaro, a former Brazilian Army captain who previously represented Rio de Janeiro in the country’s Congress, took office on Jan. 1. Bolsonaro continues to spark outrage over his rhetoric against LGBTI Brazilians, women and other underrepresented groups.

Bolsonaro shortly after taking office issued an executive order that directed Brazil’s human rights ministry not to consider LGBTI-specific issues. Bolsonaro a few weeks later tweeted “great day” after Jean Wyllys, a member of the leftist Party for Socialism and Liberty who is the first openly gay man elected to the Brazilian congress, resigned and fled the country because of death threats.

Bolsonaro on March 19 stressed his government’s “respect of traditional family values” and opposition to “gender identity” as he spoke alongside President Trump during a press conference in the White House Rose Garden. Bolsonaro later met with Pat Robertson and other evangelical Christians and prayed with them.

Bolsonaro last week said he does not want Brazil to become a “gay tourism paradise.”

“He is nothing but an empty and perverse being,” São Paulo Congresswoman Érica Malunguinho, the first transgender person elected to a state congress in Brazil, told the Washington Blade on April 26.