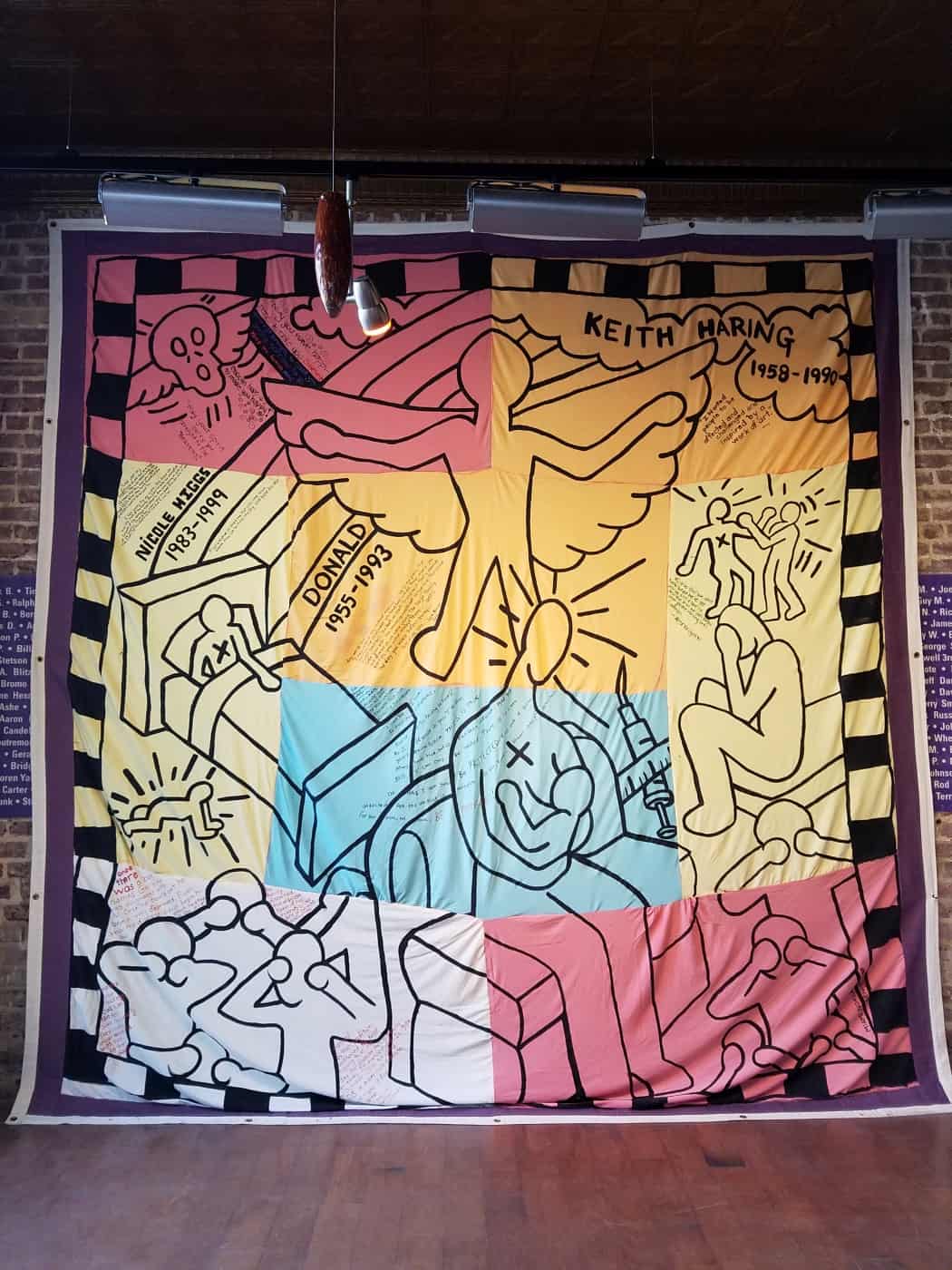 In 1985, seven years after San Francisco City Supervisor Harvey Milk was assassinated, activist Cleve Jones asked those marching in the annual candlelight vigil to honor Milk and Mayor George Moscone’s memories by writing the names of the 1000 people who had died of AIDS in that city that year on signs and placards.

When the march reached San Francisco’s Federal Building, Jones and other organizers began taping the signs to the building. When they stepped back to take in all the names, the patchwork of signs looked like a quilt. Within a few years, the NAMES Project Foundation – the AIDS Memorial Quilt – was born.

Now, over 30 years later, the Quilt is the world’s largest AIDS memorial, with an estimated 56 tons’ worth of panels designed by family and friends of those who’ve been lost. The majority of those panels – those not on display in numerous venues around the world – have been housed in Midtown Atlanta since 2002 along with the offices of the NAMES Project Foundation. And the organization is now in the process of moving its headquarters to a 2,500 square foot storefront downtown that will serve as a visitor and education center, while the bulk of the Quilt will be housed in a 4,200 square foot warehouse in Tucker. Both locations will open in June.

“We moved here in the early 2000s because Atlanta was at the center of research surrounding HIV/AIDS with the CDC and other agencies, and, sadly, one of the nation’s leading centers of new infections. We wanted to become part of the community and help change the conversation and shift the narrative,” executive director Julie Rhoad told Georgia Voice during our visit to the new facility.

Many of the groups that visit the Quilt represent schools and organizations that aren’t always the most open and accepting. A visit to the Quilt sparks conversations they wouldn’t otherwise be able to have.

“Open and inclusive conversations are usually off limits with many of these groups,” Rhoad said. “The teachers or community leaders know these issues have to be discussed, so a visit to the Quilt opens the door to those conversations in a safe and educationally appropriate context.”

The Quilt regularly hosts groups of students, activists, and tourists, but the current facility on 14th Street wasn’t built to have such large groups moving in and out and experiencing presentations and workshops. The new facility in the downtown tourist district on Luckie Street will have space for nearly 150 people.

“Many people have asked us why we don’t just do a digital quilt – but the level of detail that becomes available online doesn’t compare to sitting down and choosing what artistic tools we’ll use and the materials we’ll employ,” Rhoad said. “It’s the stories behind all of these that bridge the gap between the digital and the physical.”

To bridge that gap, the NAMES Project has been developing an app to help visitors to the center in Atlanta and viewers from around the world round out their experience.

“There are hundreds of thousands of documents, wedding rings, photographs and all sorts of things that people send with the panels that tell the story of the people behind the panels,” Rhoad said. “Visitors will be able to add stories and background on their loved one online through the app along with the panels they create.”

The new facility will also house a table-top, interactive version of the app that can show the entire Quilt as one or zoom in to illuminate individual panels and stories. Anne Balsamo, one of the NAMES Project’s board members who’s leading the work on the app, hopes the new facility will be a “beta site” to dive into the idea of connecting people to the quilt digitally so they can compel people to dig deeper.

The visitors’ center will regularly rotate and display panels from the larger quilt for drop-in visitors. Additionally, with a little bit of pre-planning, visitors can request specific panels be put on display for their visit.

“It helps that our warehouse is only 20 minutes away. We can run over there and grab a section if someone wants to see it,” Rhoad said.

’56 tons of fabric sentiment and love’

The Quilt’s new visitors’ center is accessible from MARTA’s Peachtree Center station and the Atlanta Streetcar passes right outside the new facility. The building is just steps away from Centennial Park and the other tourist attractions, which Rhoad hopes will encourage more people to come learn about the Quilt and the legacies of those who are memorialized.

“We’re going to start hosting panel-making workshops so people can come in and make everything right here. We’ll have all of the materials they will need,” she said.

Making a panel is an incredibly powerful statement for many.

“We know that our family would lay down their lives for us – but most of our grandmothers or parents probably wouldn’t chain themselves to desks at the NIH [National Institutes of Health] or march with ACT UP, though some of them did,” Rhoad said. “The Quilt gives them a way to honor the life of their grandchild or child and transform it into education and activism and make sure that life could live on.”

The AIDS Memorial Quilt’s new facility is scheduled to open on June 1 with a flurry of events in partnership with agencies across Atlanta. Before then, volunteers and staff are working to get all of the facilities in order – though Rhoad notes that both in-person volunteers and financial contributions are very welcome.

“We’re charged with a responsibility to care for 56 tons of fabric sentiment and love,” she said. “That’s an enormous responsibility. Memory isn’t just a thing of the past. The challenge is making it relevant and teaching it in this day and age, and the Quilt does that in person in ways that many monuments can’t.”