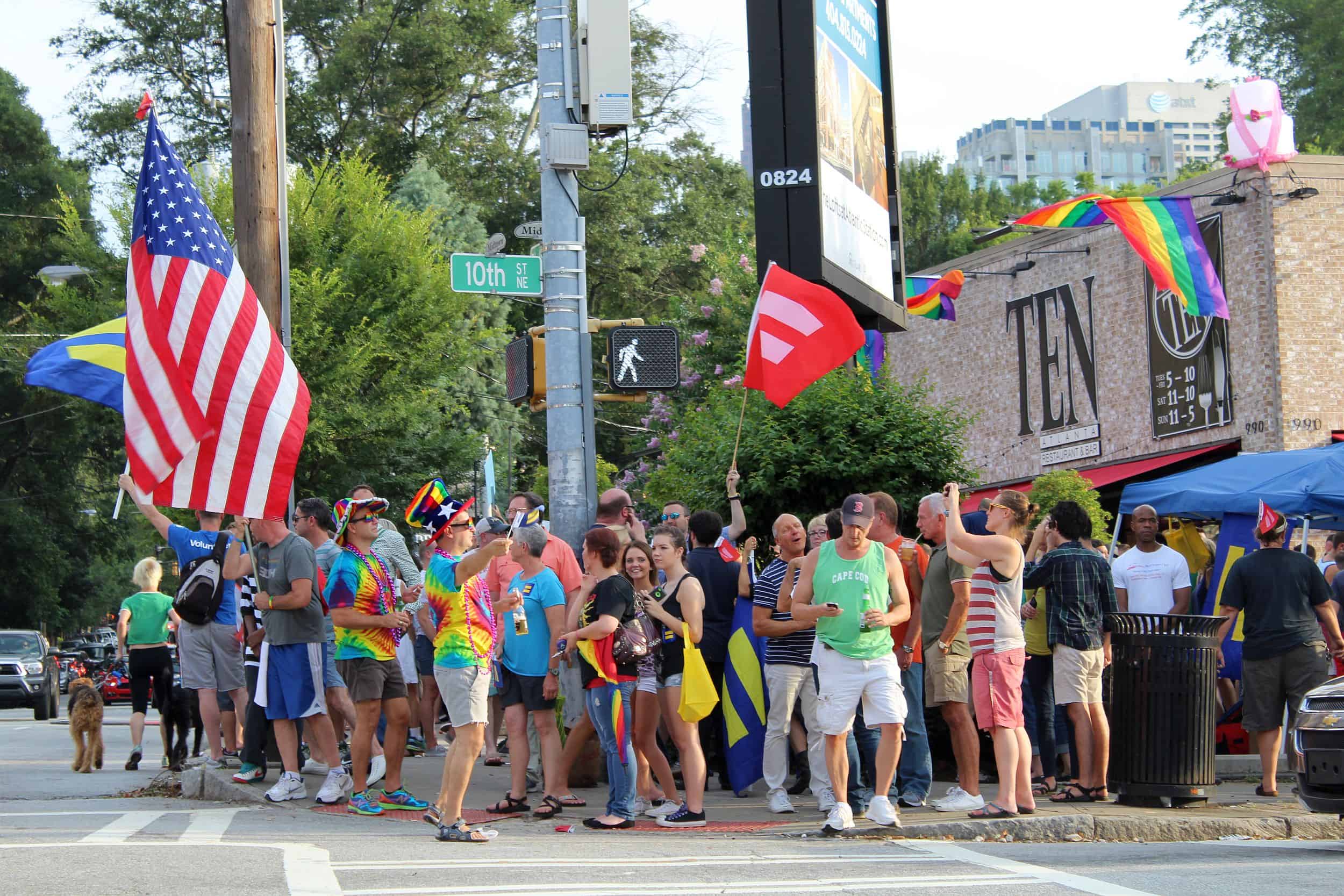 Atlanta’s skyline is changing. Along with the iconic high-rises, cranes building new condos find themselves in the silhouette. And with new condos come new people, which brings new concerns for the preservation of history in LGBT Atlanta.

“Throughout the years, there have been instances of bullying, meaning that the residents and visitors in Midtown, they disagree with what the fabric of Midtown is, so they try to change it,” said resident Jason Dabbs. “They want their neighborhood to be exactly like they want it to be. They don’t want the gay bar. They don’t want the bar that has the dance music on Sunday afternoon, because they are seeing that the price of the property would probably increase if they eliminated anything that was not bright and shiny.”

Following repeated alleged harassment of lesbian bar My Sister’s Room and the cluster of LGBT bars around the rainbow crosswalks of 10th Street and Piedmont Avenue, Dabbs was inspired to create the I Am Midtown movement: an empowerment movement aimed to end bullying against these and other businesses.

Right now, it has an active Facebook group and members are planning rallies at local bars and restaurants. Dabbs said members hope to raise money to help business owners recoup some of the money they have to pay for the noise violation calls being placed against them by residents in the new condo complexes.

“The goal of I Am Midtown is not to make money, but to balance what’s existing so we can keep the fabric of Midtown there. We want it to be there in 20 years,” he said.

Dabbs defined the “fabric of Midtown” as “a community that welcomes everyone without bias, without judgment” and one that is open to a difference of opinion, while also respecting what those who came before worked so hard to achieve.

“Our population, everyone’s coming. It’s progress that we can’t really stop, but maybe we could guide it into the right direction,” he said.

“There’s a couple, a husband and wife, that moved in adjacent to the [Blake’s on the Park] parking lot. They immediately started bullying the owner of TEN for the music being too loud. We’re talking normal business hours, 9:00 on a Saturday night,” Dabbs said. “They started the same thing with other businesses right there.”

Dabbs said the owner of TEN spoke with the complainants, who told them that he wanted to work together for a common goal. The couple appeared to agree, but according to Dabbs, allegedly began making moves intended to have the LGBT bars shut down. This included taking photos of trash in the streets and parking lots near the businesses, and complaining about gay couples kissing in public.

“Now there’s a resident at 77 12th Street that lives across the street from the lesbian bar My Sister’s Room, constantly complaining about the karaoke,” Dabbs said. “Every time that a resident calls the police and reports a noise ordinance, it costs the bar $50. The owners had the same resident call the police several times in one night; multiple times over the course of the month.”

My Sister’s Room opened in Midtown three years ago after a long history in East Atlanta Village.

“It’s never our bar. It’s usually another club making the noise — or there’s no clubs making noise,” co-owner Jen Maguire said. “The police are being called to our establishment because they have to answer every call. Ninety-nine percent of the time, the police department’s been like, ‘Why is she calling on you guys?’”

The neighbor who makes the complaints wishes to remain anonymous. The Maguires met with former Mayor Kasim Reed, two LGBT liaisons, Atlanta Police Chief Erika Shields and other city officials to discuss what they say is harassment. Likewise, Dabbs said members of I Am Midtown met with Mayor Keisha Lance Bottoms, who indicated “she is on board to fight with us.”

“Mayor Keisha Lance Bottoms is aware of the alleged false noise violation reports against some of the longstanding neighborhood LGBTQ bars,” a spokesperson for Mayor Bottoms told Georgia Voice. “Atlanta’s LGBTQ community are a critical part of our city’s diversity and harassment of any kind will not be tolerated in the city of Atlanta. LGBTQ-owned businesses are welcomed in every neighborhood of this city. Mayor Bottoms looks forward to working in partnership with APD, the Midtown venues and neighborhood organizations to ensure that Atlanta continues to honor its core values of diversity and inclusivity in all our communities.”

Jen Maguire is frustrated with MSR being singled out.

“This has been going on for three years. We’re a small business paying triple the amount of rent in Midtown. We’re in East Atlanta for seven years, had neighbors behind us, never, ever had the cops called on us. We’ve probably had the cops called on us 200 times at least,” Jen Maguire said. “The last one, I had had it. The cop came in a paddy wagon and this is the second time they came in a paddy wagon to our bar. I said, ‘This is embarrassing.’ They pull up out front with the blue lights on. I feel like we’re becoming known as a trouble spot because the cops always come up out front.”

The Maguires met the complainant on several instances. She’s called the bar and screamed over the phone at them, and one day walked into the bar to scream at the bartender.

“She does straight up not like black people or white people and gay people,” Maguire said. “One day she called and said I had too many black people out in front of the bar, and that was why we had cops outside. … If that lady wants us gone, I’d be happy for her to buy us out of our lease.”

Maguire’s wife and co-owner, Jami, echoed her concerns. Both said My Sister’s Room plans to find a new location when its lease is up because of the problems.

“Other cities, if you move next to a bar, that’s what you did. Here in Atlanta, the city is like, ‘Oh, this poor person having to listen to this bar that’s been there for over 30 years,’” Jami Maguire said. “I feel like Atlanta is favoring churches and residents over the entertainment industry that brings millions and millions of dollars into the city. Atlanta needs to change its way of thinking.”

If a resident reports a noise violation, a patrol unit is dispatched.

“If no violation is found, no further action is taken,” Atlanta Police Zone 5 Commander Maj. Darin Schierbaum told Georgia Voice. “If the officer believes a violation is occurring, then he or she will meet with the manager to seek voluntary compliance with the noise ordinance. A return call could result in a citation being issued.”

He said if a caller is found to be intentionally falsely reporting businesses for noise violations, that caller could potentially be charged. As for businesses that feel they’re being harassed, Schierbaum said there’s the possibility to seek private and civil relief “if a matter does not rise to a criminal offense, but is still deemed by the citizen to cause harm.”

“The zone commander remains available to meet with any individual who wishes to discuss concerns related to their home or business in Midtown. The Atlanta Police Department values the vibrancy and diversity of Midtown, and is committed to providing for the safety and security of residents and business owners alike,” Schierbaum said.

He told Georgia Voice that in the last year, 42 noise complaints were logged against My Sister’s Room and six against Blake’s on the Park. None resulted in citations. However, he said, “no citations” may mean that a violation was observed, but a manager voluntarily lowered the volume or took other steps to address the issue.

Fears of stalwart LGBT bars closing are the latest in a series of events to threaten Midtown’s history as a gay Mecca. Cowtippers — which won several placards in Georgia Voice’s Best of Atlanta awards over the years — announced it will close later this month, and bars around the Cheshire Bridge area and the BeltLine face mixed feelings as to their future. Jungle Atlanta shuttered its doors late last year, and recently courts told Tokyo Valentino, an adult store, that it couldn’t remain open on Cheshire Bridge because it violated the city’s adult entertainment ordinance.

“Clearly, they are trying to ‘clean up’ Atlanta from gay everything,” Georgia Voice reader Cazenrique Oliveira said via Facebook.

Readers Jason Hall and Justin Ziegler, however, attributed the change more to assimilation of LGBT individuals into the mainstream population.

“If we are talking about bars, clubs, restaurants with a primarily LGBT audience, I think location-based dating and hook-up apps have been more influential in their decline than development of new, high-density residential [developments],” Ziegler, a realtor, said. “I think the increased acceptance of LGBT people has also made it easier for people to be comfortable in places that aren’t necessarily LGBT-centric.”

Jen Maguire said it’s up to LGBT Atlanta and its allies to make sure these businesses survive.

“Come back. Where the hell are you guys?” Jen Maguire said. “We’re getting shut down because there’s not enough support. Come support your LGBT-owned businesses, your black-owned businesses. We’re not saying you have to come to the bar every day, but … if we want to save our bars, come out and support. We’re fighting the good fight to try to keep these bars and establishments alive.”

Dabbs hopes developers will consider the legacy they want to leave.

“Are you going to be just another mid-rise condo that looks the same everywhere, or will you represent some of the community that developed there over the last 20 or 30 years? That is a really good balance if you just look for it,” he said.

For the neighbors who aren’t enthused about being so close to bars, LGBT or not, Dabbs wants them to come off their porches and become part of that Midtown fabric.

“Take some time to get to know us. Go to the bars. Go to the restaurants. Give your community a chance,” he said. “You might find that you have some great friends.”