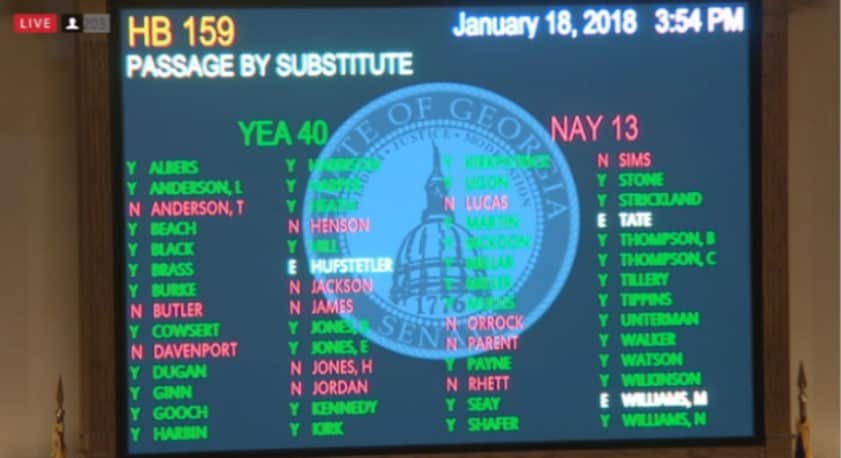 The Georgia Senate on Thursday passed a bill that would rewrite the state’s adoption laws for the first time in 27 years, and they did so without adding an anti-LGBT provision back in. House Bill 159 passed by a vote of 40-13 and now goes back to the House.

Thursday’s vote came following last week’s Senate Judiciary Committee meeting where anti-LGBT language was removed. The religious exemption would have allowed private adoption agencies — including those that receive taxpayer funding — to refuse to place children with same-sex couples. That amendment was added to the bill toward the end of last year’s legislative session, leading it to stall in committee, much to the dismay of Gov. Nathan Deal and House Speaker David Ralston.

Deal and Ralston wanted a “clean” bill passed this year without the provision. The committee went halfway last week, removing the anti-LGBT amendment but adding a proposal Gov. Deal vetoed last year — limiting expense payments to birth mothers and partially reinstating waiting periods before adoptions can be finalized. The bill was engrossed during Thursday’s floor vote, meaning no changes could be made.

Minutes after the vote, Gov. Deal tweeted about having “serious concerns” about this version of the bill.

I commend the Senate for taking action on HB 159. However, I have serious concerns regarding their version of the bill and am hopeful they will be addressed through the legislative process.

LGBT groups rallied supporters to contact their senators about leaving the anti-LGBT amendment out in advance of Thursday’s vote. Georgia Unites Against Discrimination, a project of Georgia Equality, sent out an e-blast Wednesday that included a letter from Beth and Krista Wurz, who have several adopted children.

“Thousands of children just like ours are currently in Georgia’s adoption and foster care system, and for legislators to politicize their lives is unacceptable,” they wrote. “No child should be denied the right to a loving and supportive home because a few lawmakers want to discriminate against families like ours.”

The Wurzs were two of the plaintiffs in the lawsuit to overturn Georgia’s same-sex marriage ban, a ban later wiped from the books thanks to the Supreme Court’s decision on marriage equality in June 2015.

The Human Rights Campaign also got involved with today’s Senate vote, sending a mass text to Georgia followers asking them their zip code so HRC could connect them with their senator.

While the anti-LGBT provision remains out of HB 159, Senate Judiciary Chairman Jesse Stone (R-Waynesboro) said in last week’s committee meeting that a separate bill with an anti-LGBT religious exemption is in the works.