The Georgia Voice Editors
GeorgiaNews
May 10, 2010 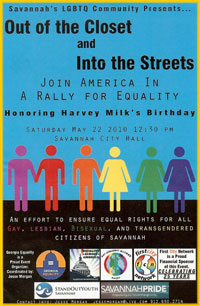 The event is part of the national Equality Across America’s call to action to grassroots groups to honor Milk. Across the nation in different cities, there will be “Rallies for Equality” on May 22 to raise awareness of efforts underway to secure equality for gay, lesbian, bisexual and transgender people at the federal level.

The Savannah event is organized by the Savannah chapter of Georgia Equality and sponsors include Equality Across America, Savannah Pride and First City Network. The May 22 action concludes a week of action beginning May 17, the International Day Against Homophobia.

Milk was born May 22, 1930, in New York. He became the first openly gay elected official in California in 1977 when he won a seat on the San Francisco Board of Supervisors. He served 11 months and during that time he was able to secure passage of a bill that outlawed discrimination based on sexual orientation.

Dan White, a former member of the Board of Supervisors, shot and killed Milk and Mayor George Moscone on Nov. 27, 1978.