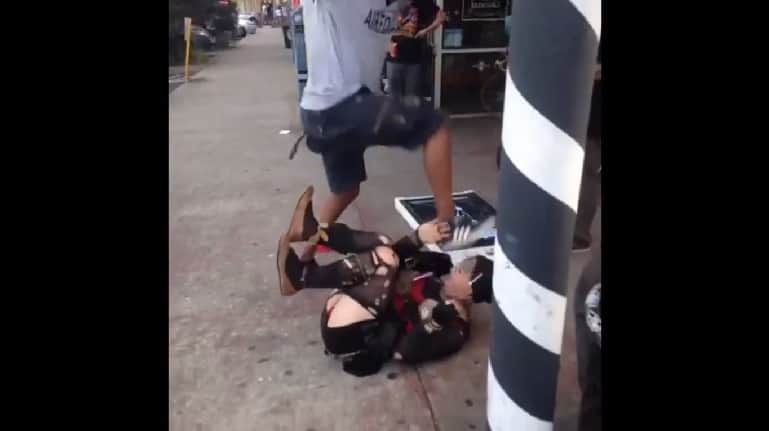 UPDATE JULY 3: Man who says he filmed attack said it was not sparked by transphobia.

Video has surfaced online of a transgender woman being brutally assaulted in Little Five Points. The attack occurred in front of Stratosphere Skateboards. The Vine video was posted Tuesday and started circulating on Twitter late Wednesday.

A Vine user with the username TriAngle SquarE posted a series of Vines showing a trans woman in a verbal altercation with several people. The last video posted showed an unidentified man throwing the woman to the ground and then stomping on her head. You can view all of the Vines spliced together below into one video, but be advised that it is violent and includes explicit language.

It is unclear what happened after the last Vine, and what the extent of the victim’s injuries are. The GA Voice reached out to the Atlanta Police Department tonight to find out if they were aware of the incident and if a report had been filed.

The GA Voice does not know who the victim is or how they identify.

“I have checked with Zone 6 Command and searched myself but cannot locate a reported dispute at that location,” the APD’s Gregory Lyon said. “It’s quite possible the person being attacked in the video did not report this to us.”

This is the second recent attack on trans women captured on video, following the assault on two trans women on a MARTA train in May. Two men have been arrested and charged with disorderly conduct in that incident.

Cheryl Courtney-Evans, founder of Transgender Individuals Living Their Truth (TILTT) said it was disturbing to see people again watching and doing nothing to help.

“If this person is not in the hospital, I don’t know why the Atlanta Police don’t know about it—she should have reported it. I’m sickened by the fact that people were once again standing around doing nothing, when this waste of DNA should have been detained and locked up for assault.

“As a community, transgender individuals are just tired of having to fear and worry about our safety at any given moment that we leave our homes. While we understand that the LGB community has the same worry, we also know that they have reached a point in society where it is not so prevalent or common. Transgenders, on the other hand, particularly MTFs, must worry about ‘passing’ or they become instant possible targets for verbal or physical abuse,” she said.

“That’s another horrific attack against a transgender or gender variant person. I hope that the person who has been attacked comes forward so that the police can fully investigate. It is also time to address the overall violence that transgender people live with every day through increased public education and enforcement of the policies that the city of Atlanta has put in place,” he said.

The appearance of the video led to a flurry of tweets about the incident Wednesday night.

Cringe is too soft a word for the visceral reaction I have when I watch that vine. I can’t accept that this is Atlanta.

@rjmedwed every woman everywhere should be disgusted to their core about this. This is our sister. And ppl stood and watched it.

Apparently Atlanta ISN'T the city "too busy to hate." Attack on a trans woman on Moreland yesterday is a growing trend.

For the people asking how they can make me feel better: Prevent this from happening again. Protect trans women.

The GA Voice has reached out to Stratosphere Skateboards and surrounding businesses to talk to any witnesses to the incident. Anyone with more information about the attack, please contact me via email or Twitter.