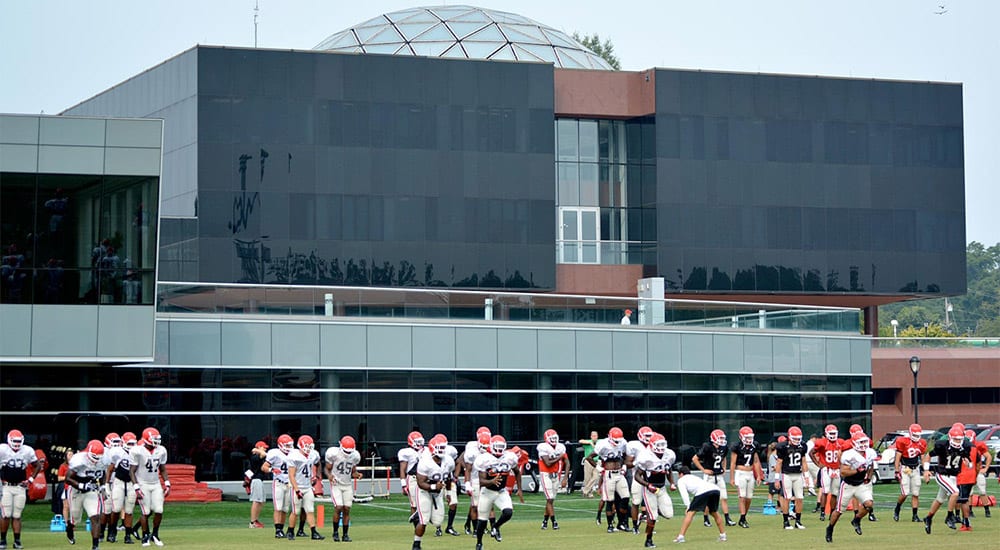 A hidden shower camera has led to the arrest of the University of Georgia’s equipment manager. The alleged perpetrator is Kevin Purvis, age 37, associate equipment manager for the UGA football team. Purvis, of Ocilla, has been worked with Georgia Athletics since 2006. According to Sports Illustrated, Purvis was previously employed as the head of football equipment at Valdosta State.

The arrest warrants were announced on Friday, and Purvis turned himself into the police shortly afterward. Purvis was booked into the Athens-Clarke County Jail on Friday, March 23 at 8:48 PM. Sources state that Purvis has been charged with four felonies and one misdemeanor. Three of the felonies are for unlawful surveillance, and one related to possession of a Schedule II controlled substance. The Associated Press reported that the misdemeanor was for possession of marijuana.

According to Georgia spokesperson Claude Folton, Purvis’ employment had been terminated. The observation equipment was discovered approximately a month ago in the shower subsection of Butts-Mehre Heritage Hall. Legal authorities were subsequently alerted to its presence. Anecdotal reports state that Purvis’ vehicle was searched shortly thereafter.

During the illegal surveillance, at least one individual was captured showering on camera per Dawg Nation.

Folton said no student-athletes had been victimized.

According to Dawg Nation, UGA Coach Kirby Smart was said to be “disappointed” when he learned of the scandal. Smart said:

“Disappointed. Upset,” said Smart, asked for his reaction to the investigation and findings. “But I’m very pleased that it didn’t involve any of our student-athletes, and that’s the key. Right now I’m focused on spring ball.”

The Dawg Nation report described Purvis as a “key member” and “particularly helpful to Smart,” who was involved with the football team “every day.” CBS News reported that Purvis’ primary duties were “ordering and accounting for the Bulldogs’ football equipment and assisting in equipment efforts on game days.”