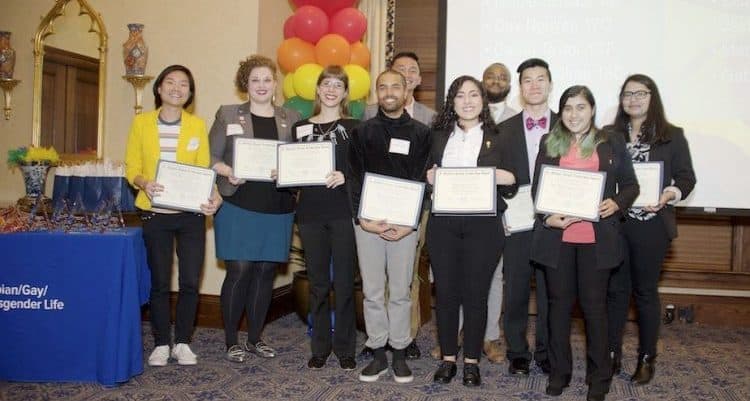 Each year, thousands of Georgia college students don caps and gowns, preparing to enter the hallowed life phase of “adult.” Many of these students are honored through their individual schools, athletic departments and organizations they’re part of.

And at four Georgia institutions, LGBT graduates are recognized through Lavender Graduation.

“LGBT graduates typically have had to face additional obstacles and unique barriers to completing their college degree or their graduate degree. They may have faced challenges with friends and family not accepting them, homelessness, mental health concerns, just the difficulty of figuring out who you are as a person with a minority identity,” said Aby Parsons, the director of Georgia Tech’s LGBTQIA Resource Center.

Lavender Graduations began in the mid-90s at the University of Michigan as a way to congratulate students for overcoming those challenges, plus the already difficult obstacles of obtaining a college degree. In the Peach State, the ceremonies are held at Georgia Institute of Technology and Emory University in Atlanta, Georgia College and State University in Milledgeville and University of Georgia in Athens.

“I think it’s a very nice way to build a sense of community and celebrate the accomplishments of the people around you,” said Hobie Hunter, a queer senior economics and history double-major from Boca Raton, Florida, who went through Emory’s ceremony in March. “I think it’s also about honoring LGBT Emory students in the past. Lavender Graduation began because queer students didn’t feel safe, and thankfully that’s no longer the case.”

Lavender Graduations — or LavGrad, as it’s sometimes referred to — show students how grateful a university community is for their contribution, Parsons said.

Depending on the year, the number of lavender graduates ranges from a dozen to more than 30 at each university, and the audience of families, partners, community supporters, friends and faculty grows every year.

“It was time for me to be more open and show people, you can do this and you can graduate,” James said. “It was really cool to notify people we’re not only graduating, we’re thriving and doing great things. … It’s like almost any other organization would have a salute to grads, this is a salute to LGBT grads.”

He said underclassmen should consider attending to watch and learn from returning alumni and to hear the career plans of each year’s graduates — including LGBT students going on to pursue jobs with NASA and consulting firms, as was his experience.

“We’re not allowed to do that here. Tech has rules around who can wear what,” Parsons said. “We do give out a lavender diploma, which is a keepsake certificate that the dean of students signs. It’s more of a memento they can keep and frame.”

Both Tech and Emory roll their LavGrad festivities into an awards ceremony.

“As part of that awards ceremony, there was a recognition of people who were graduating from Emory,” said Danielle Steele, interim director for Emory’s Office of LGBT Life. “This is for LGBT or queer folks on campus who want to receive this honor.”

She said Lavender Graduation is something students look forward to, even those who may not have been very involved or connected with the university’s LGBT community.

For universities that want to start their own Lavender Graduation, Parsons advised getting buy-in from supportive departments and community sponsors.

“They want to demonstrate they’re an inclusive or welcoming school or college,” she said. “Invite the president of the institution, or a really well-respected member of senior leadership to give a lavender commencement address or keynote. It shows students that the institution takes their community seriously and wants to celebrate with them.”

Lavender Graduations don’t have to be fancy and institutionalized, Hunter said. He said it would be easy for a college to start its own small-scale Lavender Graduation — all it takes is someone to make the diplomas and some space on the quad to meet.