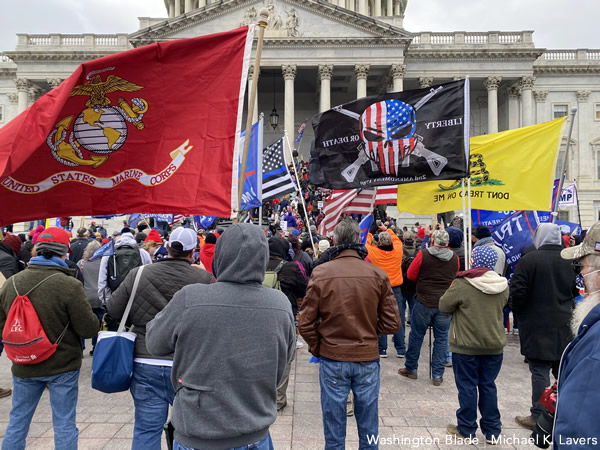 LGBTQ rights groups on Wednesday were quick to condemn the siege of the U.S. Capitol.

“Today’s violence is revolting and nothing short of insurrection, a coup instigated by Donald Trump and abetted by cowardly Republicans who have put party over conscience,” tweeted Human Rights Campaign President Alphonso David. “We must honor the rule of law. It is what has made our democracy a model and one that is worth upholding.”

Today's violence is revolting and nothing short of insurrection, a coup instigated by Donald Trump and abetted by cowardly Republicans who have put party over conscience. We must honor the rule of law. It is what has made our democracy a model and one that is worth upholding.

PFLAG Executive Director Brian K. Bond in an email to his organization’s supporters wrote “today’s violence” was “undertaken not to build up, but to tear down. And we cannot ignore glaring differences between the treatment of Black Lives Matter protestors seeking justice and the treatment of the violent insurrectionists who today stormed the U.S. Capitol to undermine our democracy.”

“The people attacking the Capitol building are not protestors, and the disparities in how they were received are glaringly clear,” added Bond.

“The peaceful transition of power is the hallmark of our American democracy that both Republican and Democratic presidents have honored throughout history,” said Martinez in an email to Equality Texas supporters. “The subversive nature of today’s insurrection, which led to the breach of the U.S. Capitol, is not only un-American; it is domestic terrorism. Moreover, the lack of preparedness to ensure public safety was negligent — especially compared to the extraordinary measures taken during the peaceful Black Lives Matter protests in the summer.”

The siege began as members of Congress were certifying the Electoral College results that confirmed the election of President-elect Biden and Vice President-elect Harris. Trump supporters marched to the Capitol after the outgoing president spoke at the “Save America Rally” on the Ellipse.

“Congratulations to Senator-elect Rev. Raphael Warnock and Senator-elect Jon Ossoff on their historic elections to the United States Senate,” said Equality Florida in a tweet. “We are thankful for our volunteers, members, staff and board for being a part of the coalition that supported Georgia Equality (an LGBTQ rights group in Georgia) in their efforts to elect pro-equality senators.”

“This historic mobilization of voters is a testament to our incredible democratic process, and contrasts the treasonous actions taken by supporters of President Trump at the U.S. Capitol today,” added Equality Florida.

Congratulations to Senator-elect @ReverendWarnock and Senator-elect Jon @Ossoff on their historic elections to the United States Senate! https://t.co/jdX1OBCyfv

Equality Florida CEO Nadine Smith and National LGBTQ Task Force Executive Director Rea Carey are among those who have called for Trump’s removal from office. Smith has also called for an investigation into the U.S. Capitol Police’s response to the siege.

“We condemn the violence in Washington, D.C., and in communities across the country that has been incited by today’s attack on the Capitol building,” said Carey in a statement. “We are better than this. To move forward we must begin by making the strongest statement possible and remove Trump from office using the power of the 25th Amendment.”

“Today’s unprecedented events are a betrayal of that fundamental American commitment, and any pretense to ‘patriotism’ on the part of those who committed today’s acts of desecration of the temple of democracy that is our Capitol building are blasphemous,” he said. “Our democratic processes must be defended, and we call upon our leaders to utilize any and all processes available to them, including the 25th Amendment, to ensure an orderly transition of power in accordance with the will of the American people as expressed freely at the ballot box in November.”