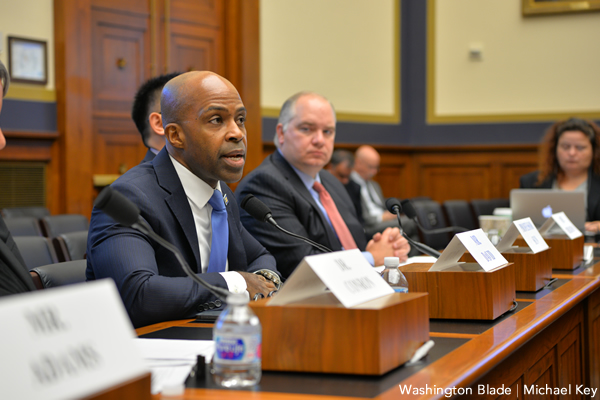 With LGBTQ advocacy organizations eager for change in the new Biden administration, the Human Rights Campaign has laid out proposals lighting the way forward with a detailed guide on administrative actions to reverse President Trump’s anti-LGBTQ policies.

The 24-page document, titled the “Blueprint for Positive Change 2020,” lays out guidance across all federal agencies to reverse the anti-LGBTQ policies under the Trump administration and advance equality after President-elect Biden takes office.

Alphonso David, president of the Human Rights Campaign, pointed out in an interview with the Washington Blade on Wednesday his organization prepares a blueprint at the start of a new administration, but this time at the end of the Trump era things are different.

“These are steps that the Biden-Harris administration can take affirmatively and administratively to protect LGBTQ people and really not only put us back in positions that we were in before the Trump administration, but advance us forward toward equality,” David said.

The Human Rights Campaign, David said, has been identifying policies for the past year under the Trump administration in anticipation of producing the blueprint and having the chance to reverse them if President Trump was voted out of office.

Key among the recommendations is implementation of the U.S. Supreme Court’s landmark decision in Bostock v. Clayton County, which found anti-LGBTQ discrimination is a form of sex discrimination, thus illegal under Title VII of the Civil Rights Act of 1964.

David pointed out the Trump administration has never implemented the decision even though it was handed down in June.

“Bostock is not just simply about employment protections,” David said. “The court clearly says if federal statutes prohibit discrimination on the basis of sex, that should also include sexual orientation and gender identity. So we have many federal statutes, housing, credit, other federal statutes that would provide protections to LGBTQ people, so a full implementation of Bostock would take us steps forward in terms of protecting LGBTQ rights and advancing those rights.”

The Human Rights Campaign isn’t the only LGBTQ advocacy group putting out guidelines for the new administration to advance LGBTQ rights.

Other LGBTQ organizations — including the Movement Advancement Project, the Center for American Progress, the Equality Federation, GLSEN, the National Center for Transgender Equality, and the LGBTQ elder group SAGE — issued their own document with 10 priorities for the Biden administration. Much of the guidance is similar, including implementation of the Bostock decision, reversing the transgender military ban and restoring non-discrimination regulations for LGBTQ people.

David said he has been in conversations with the Biden transition team and provided a copy of the blueprint to them and the reaction was “positive.”

“They have been very hospitable, very open to receiving the blueprints, and and very accommodating in discussing any concerns or questions that may arise as we go through the process,” David said.

Some of the policy changes, David said, could be done immediately, such as implementation of the Bostock ruling, but others would take additional time because of federal law governing regulations.

As the U.S. Supreme Court determined earlier this year in its decision on DACA-protections for undocumented immigrants, the Administrative Procedure Act prohibits any administration from making policy changes too quickly or without going through an open process allowing for due consideration.

David identified the Department of Health & Human Services withdrawing an Obama-era rule interpreting Section 1557 of the Affordable Care Act, which prohibits discrimination on the basis of sex in health care, to apply to cases of anti-trans discrimination as one Trump-era measure that would take some time to reverse.

“We certainly suspect that anti-equality forces will be attacking the Biden-Harris administration in their attempts to protect LGBTQ people,” David said. “So we want to make sure that we take all of the steps necessary to implement regulations that would be appropriate in protecting LGBTQ people, so that’s one example of where we would have to go through a process.”

Reggie Greer, the Biden-Harris campaign’s LGBTQ+ engagement director, spoke generally about Biden’s support for LGBTQ rights in response to a request to comment on the blueprint.

“President-elect Biden has dedicated his life to advancing LGBTQ+ rights and will work to usher in the most pro-equality administration in history,” Greer said.

Biden as a presidential candidate, however, trumpeted his support for LGBTQ rights and issued a detailed policy plan on the way forward on LGBTQ issues that encompass many of the same plans.

But what about the Equality Act?

The new blueprint is for administrative actions, so it doesn’t take into consideration legislative items such as the Equality Act to advance LGBTQ rights, which Biden has said would be his No. 1 legislative priority and signed within 100 days of his administration.

The failure of Democrats to capture to the U.S. Senate, however, has thrown a wrench into the anticipated majority Biden would have for his legislative agenda.

The Associated Press Wednesday morning called the Senate race in Alaska in favor of Republican Dan Sullivan. The Senate would be at most split 50-50, and that would be the case only if Democrats are successful in both races in the upcoming run-off elections in Georgia.

Despite the lack of a Democratic majority in the Senate, David said he sees opportunities to move the Equality Act.

“If we’re not able to obtain full majority in the Senate, we will expect to work both with the House of Representatives and the Biden-Harris administration to push through with the Equality Act,” David said. “You know, there are certain pieces of legislation that were passed during the Obama administration, with a Republican Senate that were progressive, pro-equality pieces of legislation, so we anticipate that we can do the same here.”

David conceded challenges would exist in moving forward with the Equality Act, but pointed out the president-elect has a record of reaching out across the aisle.

“Even if we’re not able to control the Senate, the Senate majority will need certain things from the Biden-Harris administration just in order to make sure governments function, and Joe Biden has always been someone who reaches across the aisle to make sure he can get things done,” David said. “So we anticipate working with them, and working with President Biden to make sure that we get through pro-equality legislation.”