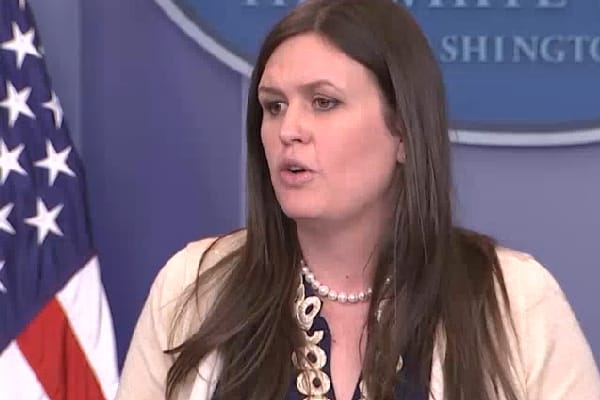 The White House said Wednesday it was unaware of whether President Trump brought up the issue of anti-gay abuses in Chechnya with Russian Foreign Minister Sergey Lavrov during a meeting Wednesday. In fact, it’s not clear that Trump has been briefed on the abuses at all.

Under questioning from the Washington Blade, White House Principal Deputy Press Secretary Sarah Huckabee Sanders couldn’t speak to whether anti-gay abuses in Chechnya came up in the meeting when asked about the omission of the issue from the White House readout.

“I mean a lot of times there are parts of the conversation that aren’t specifically included in a readout, but I’m not aware,” Sanders said. “I have not had that conversation. So I do not know, I was not part of that meeting. So I cannot speak to every detail and I would have to refer you to the readout on the specifics of what I know was discussed.”

Asked whether Trump has been briefed on the issue generally, Sanders replied, “That is something I would have to get back to you on. I am not 100 percent sure.”

UPDATE: Michael Anton, a White House National Security Council spokesperson, said via email to the Washington Blade the issue of anti-gay abuses in Chechnya “did not come up in the meetings” with Lavrov.

Concern persists over reports from Chechnya that local authorities have arrested more than 100 gay men and sent them to secret prisons for torture. At least four men have reportedly died as a result. On Tuesday, the Human Rights Campaign held a demonstration outside the D.C. residence of Russian ambassador Sergey Kislyak over the reported abuses.

U.S. Ambassador to the U.N. Nikki Haley has spoken out against the atrocities, but President Trump himself and Secretary of State Rex Tillerson have said nothing. Meanwhile, British Prime Minister Theresa May has spoken out and German Chancellor Angela Merkel said she raised the issue during a meeting with Russian President Vladimir Putin.

The readout of the meeting Trump held at the White House indicates Trump raised the issue of Syria, Ukraine, cooperation in resolving conflicts in the Middle East and elsewhere and a general “desire to build a better relationship between the United States and Russia.” But the readout says nothing about Trump bringing up the issue of anti-gay abuses in Chechnya.

Sarah Kate Ellis, CEO of GLAAD, lambasted the White House in a statement for not being able to disclose if Trump was even aware of widespread reports of the anti-gay violence.

“It is shocking that the White House can’t even confirm if President Trump is ‘aware’ of the anti-LGBTQ violence in Chechnya. It seems President Trump is only aware of news that includes his own name,” Ellis said. “If President Trump doesn’t join Ambassador Haley and other world leaders in condemning this humanitarian crisis, it is only further evidence that his administration is working to force LGBTQ people around the globe back into the closet.”

Trump held the meeting with Lavrov the day after he terminated former FBI Director James Comey, who was investigating Russian involvement in the 2016 presidential election and potential collusion between Trump and Russia in the effort.

The Blade has placed a request with the Russian embassy in the United States seeking comment on whether the issue of reported anti-gay violence in Chechnya came up during the meeting.