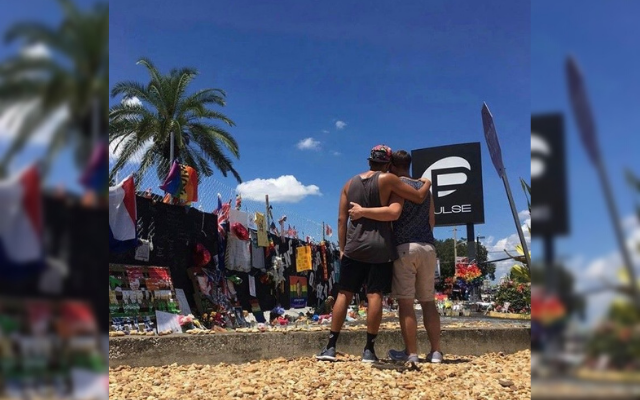 The Pulse of Our Lives: Five Years Later, a Community Still Mourns

In moments, the Pulse gay nightclub shooting in Orlando five years ago extinguished the lives of 49 young people, wounded 68 others and altered the destinies of many impacted by the early morning massacre.

An estimated 320 people, mostly Hispanic, were still at Pulse for its popular Saturday Latin Night when about 2 a.m. Sunday, June 12, 2016, a shooter from Port St. Lucie came in firing a Sig Sauer MCX rifle and a Glock 17 9mm semi-automatic pistol.

“It took that man less than five minutes to kill all of them,” said Orlando Commissioner Patty Sheehan, a lesbian who has served the city since 2000. “That man had a weapon of war that did not belong in a nightclub – or on our city streets.”

After the rampage, police went into the nightclub, found Omar Mateen and fatally shot him eight times during a gun battle.

By 8 a.m., Sheehan was with law enforcement on Orange Avenue outside the Pulse crime scene.

“It was very difficult to make identifications. Unfortunately, many of them were undocumented,” she said. “And the gunman shot many of them in the face to make it harder to identify them.”

Many of the undocumented survivors feared what would happen if authorities found them, Sheehan said.

Even before Sheehan arrived on the scene, Terry DeCarlo of the local LGBT community center “was there on the street at 6 a.m.,” she said.

DeCarlo and his husband, Bill Huelsman, both longtime LGBT activists in South Florida, moved to Orlando in 2014 when Terry became executive director of The Center (now known as The LGBT+ Center Orlando). Less than two years later, DeCarlo and Huelsman had planned to move back to the Fort Lauderdale area after Terry accepted a position with AIDS Healthcare Foundation.

In the hours, days and weeks after the massacre, DeCarlo became the international face and voice of Orlando’s devastated LGBT community.

“Those first 12 hours were so completely unorganized, we just had people there, standing in the hot sun just hugging each other,” Huelsman recalls. “Terry and I stayed there almost three days. We made a run back to the center for the press conference. He gave close to 200 interviews in those first days. I had two legal pads and a pen. I had his cellphone and my cellphone. Everybody just wanted to freakin’ talk to him.”

The afternoon of the shooting, gay men in Orlando and across Florida volunteered to donate blood for the victims. Bloodmobiles were dispatched to LGBT centers and vigils across the state. Then came the shocking realization that decades earlier – during the early days of the AIDS crisis – the U.S. Food and Drug Administration had imposed lifetime bans on blood donations by men who had sex with other men.

“People were freaked out about it,” Huelsman said. “The line was down the block and around the corner. Hundreds and hundreds of people were online. We saw a couple who drove down from Georgia to give blood. It was what they could do to help. … People were trying to help their community and were told they couldn’t.”

Six months after Pulse, the FDA relaxed its lifetime ban on gay men donating blood – just barely. Beginning December 2016, gay men could donate if they hadn’t had sex with another man for 12 months. In April 2020 – during the height of the COVID-19 crisis – the FDA relaxed the policy again, now allowing blood donations from gay men if they have not had sex with other men in the past 90 days.

“Our own community can’t donate the blood that it desperately needs. That’s so archaic. It’s 1980s thinking,” said Robert Boo, a longtime friend and colleague of DeCarlo, who is the chief executive officer of the Pride Center at Equality Park in Wilton Manors.

CenterLink, the Fort Lauderdale-based “Community of LGBT Centers,” is currently participating in an FDA-funded study with OneBlood (along with other national blood centers Vitalant and American Red Cross), in the hope of completely eliminating the gay ban, Boo said.

DeCarlo’s personal and work lives intersected so greatly after Pulse, he and Huelsman decided to pass on the AIDS Healthcare Foundation job and stay in Orlando.

“If it hadn’t been for The Center being open – and the efforts of Terry – there would have been a lot more trauma, a lot more suicides,” Sheehan said.

DeCarlo helped hundreds of parents and other relatives find help to work through their overwhelming grief, she said.

After the shooting, former President Barack Obama described The Center as “Ground Zero for community healing.”

“Terry ended up leaving the center. It was too much. He needed to go somewhere else because it was completely overwhelming,” Sheehan said. “He had a heart attack. He was really working his ass off and people were trying to nitpick what he was doing. That man was an absolute hero.”

Huelsman said his husband had no regrets about leaving Central Florida.

“He was very proud of himself, as he should have been,” Huelsman said. “We moved back. The decision was we had to get out of Orlando. We lived it every day, mental-health-wise. Even two years after, it was something that was constant. He was dealing with survivors and the families that came in. It really took a toll on us. Not that we didn’t love everyone there, but there was a time when you just had to move on.”

On June 12, 2019, he posted on Facebook: “Please hold your loved ones a little closer today as we commemorate the 3rd anniversary of the Pulse nightclub massacre and remember the 49 lives that were taken from us that morning.”

Weeks after that post, doctors discovered DeCarlo had a fast-growing cancerous tumor in the roof of his mouth. He underwent major surgery and endured chemotherapy and radiation.

DeCarlo died January 27, 2020, of the face and head cancer. The New York Times deemed his death so significant, it published a full obituary: “Terry DeCarlo, Gay Leader in the Wake of a Shooting, Dies at 57.”

“After he passed away, I got thousands and thousands of messages from around the world,” said Huelsman, his husband of 22 years. “They were all singing his praises, saying they don’t know what they would have done without him. From Australia, from China. From people who passed through Orlando and had met him.

“He had no regrets. That last day, when I was lying in bed with him, I said, ‘Remember all you have done. I can take care of myself. Always remember what you did for everyone else.’”

For more than a year – until a gunman on October 1, 2017, killed 60 people and wounded 411 in Las Vegas – the Pulse nightclub tragedy was our nation’s worst mass shooting in history.

“Pulse was not just the deadliest attack on LGBT people, but the deadliest attack [at the time] on U.S. soil since 9/11,” said Brandon Wolf, who escaped the packed nightclub with dozens of others, but lost two of his best friends, Christopher Andrew “Drew” Leinonen and Juan Ramon Guerrero, in the shooting rampage.

“Drew was the first person who taught me to love myself,” said Wolf, 32. “He was a mental health professional. He had a master’s degree in clinical psychology. He was an intellectual. He was politically fiery. He was a nerd. And he was genuinely the most loving and caring person I ever met.”

At the time of his death, Leinonen, 32, worked with outpatients for a health services company. Guerrero, his 22-year-old boyfriend, was “goofy” and “had a giggle that was unmistakable,” Wolf said.

“What was fascinating about Juan was how similar his energy was to Drew,” he said. “We were the three musketeers. We were out every week, somewhere. We traveled a lot together. We went on road trips, frequently.”

Leinonen and Wolf lived two doors from each other in the same apartment complex. “That was one of the hardest parts about living there. Walking past his door, waiting for the day when he would be peeking out the window again. It’s very real and raw still. Those are the parts the world doesn’t see. The crying. The messy parts. The painful parts.”

The night of the shooting, Wolf worked as a Starbucks store manager in Orlando. Soon after, the coffee company promoted him to district manager for Tallahassee and Panama City. He left a few years later to fulfill a promise he made to his late friend Leinonen.

“About six days after the shooting, we had a funeral service for him. His mother asked me to be a pallbearer. And I struggled to push the casket down the aisle because I didn’t want to let go of Drew before I found the right words to say goodbye.

“We got to the front of the church and I looked down at the box. I told him I would never stop fighting for a world that he would be proud of. For a world that never forgets him,” Wolf said. “So as hard as some days are, I have to do this work in this way to make good on that promise.”

Leinonen in 2002 started the first gay-straight alliance at Seminole High School on Florida’s Gulf Coast. To honor him, Wolf and other friends co-founded The Dru Project, which seeks to empower LGBT youth and prepare them to be successful leaders.

“To date, we have given away over $75,000 in college scholarships, $15,000 in mini-grants for gay-straight alliances and out-of-work drag entertainers, and published one of the most comprehensive GSA guides in the country, which will be translated to Spanish over the coming months,” according to the nonprofit’s website.

Wolf – now a national gun safety advocate and Equality Florida’s media relations manager – refuses to define himself as a victim. “No. I call myself a survivor – in all the ways that that means.”