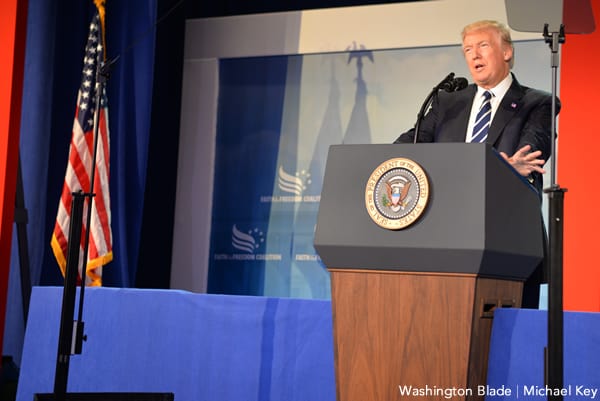 President Trump tweeted on Wednesday the U.S. military “will not accept or allow” transgender people in the armed forces, citing dubious claims of medical costs and disruptions of allowing them to serve.

“After consultation with my generals and military experts, please be advised that the United States government will not accept or allow transgender individuals to serve in any capacity in the U.S. military,” Trump tweeted. “Our military must be focused on decisive and overwhelming victory and cannot be burdened with the tremendous medical costs and disruption that transgender [sic] in the military would entail.”

After consultation with my Generals and military experts, please be advised that the United States Government will not accept or allow……

….Transgender individuals to serve in any capacity in the U.S. Military. Our military must be focused on decisive and overwhelming…..

….victory and cannot be burdened with the tremendous medical costs and disruption that transgender in the military would entail. Thank you

Trump’s announcement came out after Defense Sec. James Mattis announced late last month he’d push back the target date for allowing openly transgender people to enlist into the armed forces from July 1, 2017, to Jan. 1, 2018, citing a need for additional six-month review of transgender service. It’s unclear why Trump made the decision to bar transgender troops from the armed forces before the expected completion of this review.

Last year under the Obama administration, former Defense Sec. Ashton Carter, following a year-long review, lifted the medical regulation banning transgender people from serving in the armed forces. Although transgender people could come out without fear of discharge, openly transgender people wouldn’t be allowed to enlist until a later time, which was later pushed back.

The Washington Blade placed a request seeking comment in with the Defense Department on how the Pentagon will implement Trump’s announcement and what it means for transgender people currently in the armed forces.

An estimated 15,500 transgender service members are already serving in the armed forces. The RAND Corp. determined the cost of gender reassignment surgeries for transgender troops would consume between $2.4 million and $8.4 million, which is a fraction of the Pentagon’s multi-billion dollar budget.

Chad Griffin, president of the Human Rights Campaign, tweeted in indignation over Trump’s decision to bar transgender people from the armed forces.

15,000+ transgender Americans are already bravely serving our country. By attacking them, @realdonaldtrump is undermining our military. pic.twitter.com/8rLa5iEU8R

Praising Trump’s for announcing a ban on transgender people in the armed forces was Tony Perkins, president of the anti-LGBT Family Research Council.

“I applaud President Trump for keeping his promise to return to military priorities — and not continue the social experimentation of the Obama era that has crippled our nation’s military,” Perkins said. “The military can now focus its efforts on preparing to fight and win wars rather than being used to advance the Obama social agenda.”

Trump’s announcement came after the publication of a foreign policy report indicating Vice President Mike Pence, who has a history over his career of opposing LGBT rights, has been quietly working behind the scenes with members of Congress to reverse transgender military service.

Marc Lotter, a Pence spokesperson, however, denied in a statement Pence was talking with lawmakers about the reversing the Obama-era change.

“As I said to that publication, the vice president has been focused on health care,” Lotter said. “I am not aware of him having any conversations with members on that.”

Trump makes his announcement on July 26, the same day former President Truman in 1948 issued an executive order desegregating the U.S. military on the basis of race.