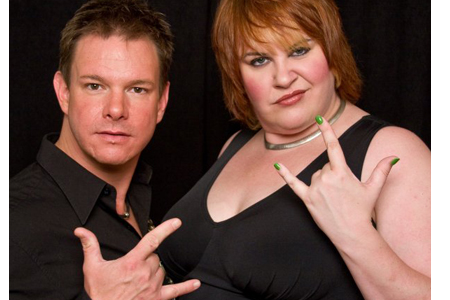 Amy & Freddy, the dynamic Chicago-based comedy duo, return to Atlanta on Nov. 28 for a show at 8 p.m. at  Mixx Atlanta  to bring the holiday spirit into the hearts of gay fans perhaps still digesting that Thanksgiving turkey.

“We’ve got a pretty good following in Atlanta. We really love Atlanta because everyone is so nice,” says Amy Armstrong, one-half of the duo. “It always feels like a vacation when we visit rather than a show.”

This year marks the 15th anniversary of Amy Armstrong and Freddy Allen performing together. During that time the two have performed across the US and in more than 20 countries with the comedy as well as musical talents — Amy sings and Freddy is a pianist.

The two have performed with such stars as Kathy Griffin, Phyllis Diller, Bea Arthur, Jennifer Holliday and Mary Wilson and the Supremes. They worked with NBC’s reality show “America’s Got Talent.”

But their LGBT community is always at the heart of what they do and together Amy & Freddy have raised $15 million for LGBT charities across the globe.

In a phone interview, Armstrong said she’s always had a singing voice and her career began as that — a singer. The comedy came naturally.

“I knew I always had a singing voice. I joke that [my comedy] began because I got heckled one night and made a comment back. And people said, ‘You’re funny.’ So I started including it in my act,” she explains. “It all happened very natural.”

She and Freddy Allen joined together and continue to entertain audiences with their mixture of comedy and music. And there is no other person Andrews would rather be working with, she says.

“We’re best friends. I love him very much. I’m lucky and grateful to have him in my life,” she says.

Armstrong loves the Christmas season and the music, so Atlanta can expect some holiday music at their appearance at Mixx.

“I enjoy Christmas music so much. Some people get so sick of it. But it gets you in the spirit. It can bring back a memory. To me, the song, ‘Do You Hear What I Hear brings me back to seeing a Bing Crosby special,” she says. “Now I love to sing it. The song brings back good times with my family.”

The comedy portion of the show is almost entirely improv, Armstrong says.

“It keeps you on your toes when nothing is scripted,” she says. “But this also lets me become better acquainted with the audience. I don’t do humor that is mean, but is about what we all deal about in life. Our main goal is to make people forget their troubles for an hour or two.”

There are plenty of fun songs for people to sing-a-long to as well, including the infamous “Pussy Song.” Check it out below: