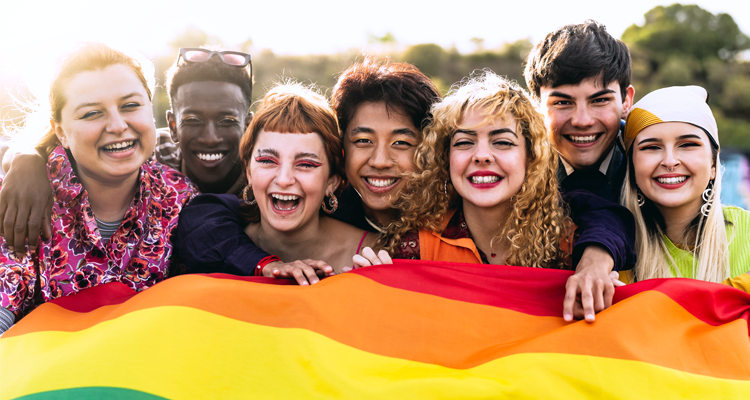 In Defense of the Young Gays

I’m writing this a few days before another birthday in the month of Pride. As always, I ruminate senility’s question: “How will I know when I’m dead?” I have solved that conundrum. I will know I am dead when I find myself in the Colonnade at a table listening, as always, to old gays complaining about young queers. I will stand up from the table and run to the door. There will be no exit. I will be trapped. I will be dead.

The conversation is always the same. “Young gays have no idea what it was like before we changed everything for the better. They don’t know our history. They don’t know what it’s like to get drunk and fuck in a bar bathroom instead of hooking up online. We had such fun, we were a community.”

Let us agree at the outset that ignorance is often fun. Let us also agree that while old people have more memories, we are as ignorant as young people. While we remember the emergence of gay life in the ‘70s, most of us still know next to nothing about our history before then. That’s because our history wasn’t told. I remember as a high school kid jumping on the bus in Sandy Springs to visit the downtown public library. I’d find a nook where nobody could look over my shoulder and read about homosexuality. I never found a single book that told any history that wasn’t within the context of mental illness, crime, and sin. I got more information from the restroom glory hole.

Groups later formed to collect and write our history, but very little found its way into public education. That is why we now see, once again, right-wingers banning books and even classroom conversation about queer history and culture. Killing history is a principal way of oppressing people, and the young of today are in our same condition.

Remember that identity among queer people is not a simple reduction to sexual difference. Our collective identities, as many scholars have noted, are also shaped by the values of the time in which we come of age. For example, I grew up in the puritanical, intolerant sewer of boomers that erupted into the period of alternative culture and radical politics. So, despite sacrificing everything to comply with normative values by getting married for five years at 20, I soon burst out of the closet with the support of other boomers-gone-hippie. By the ’90s, I was writing a biweekly gay column for ETC magazine, “Out of Bounds,” that seemed to enrage every homosexual in the city. “You are exactly the kind of gay person we do not want to represent us,” I was frequently told.

It was true that my values were quite different from most of those still in the boomer mentality, hoping above all to be “normal.” We the abnormal created our own communities like Midtown, when it was affordable. I and my friends in San Francisco (I was bicoastal) reveled in being deviants. Many of us opposed marriage. We preached, like the immensely popular drag queens of today, that being an outsider confers insight and an adventurous life. Meanwhile, the would-be-normal here walked out of the closet dressed like lawyers and many seriously tried to ban those drag queens from Pride floats, along with leather boys and anyone else exhibiting unconventional sexual expression. Atlanta’s Pride celebration attracts 10,000 people, probably a majority straight, and the old gays are worried sick that a child will see a sexual act and be traumatized for life. That is the same decrepit argument that wrecked the adventure of the glory hole.

Succeeding generations — X, Millennial, and Z — battled AIDS, won marriage rights, and — contrary to what old people think — created gay venues in digital spaces that are affordable, inclusive, and do not preclude in-person interactions. They even provide access to gay history! Millennial queer people have moved sexual and gender identity beyond the binaries. Pronouns cause the eyes of us older people to roll and rattle, but we rarely look closely. There’s much to see. Meanwhile, the general culture’s elders bask in the greedy, mean-spirited capitalism that demands, “If I had to pay off my school loans, there’s no reason you shouldn’t have to do the same,” even though it was 50 years ago with a two percent interest rate.

When I am dead at the Colonnade, I am going to make this point: the young are much more interesting than we are. True, they are largely ignorant about us and everyone before us, but we are many, many times more ignorant of them. Yes, in terms of queer identity, we’re leaving them improved personal circumstances, but they are nonetheless living in a far more difficult world than we did. You don’t have to be proud of being gay, Daddy, and you don’t have to think the young are dumb to admit your own ignorance and try a little tenderness.