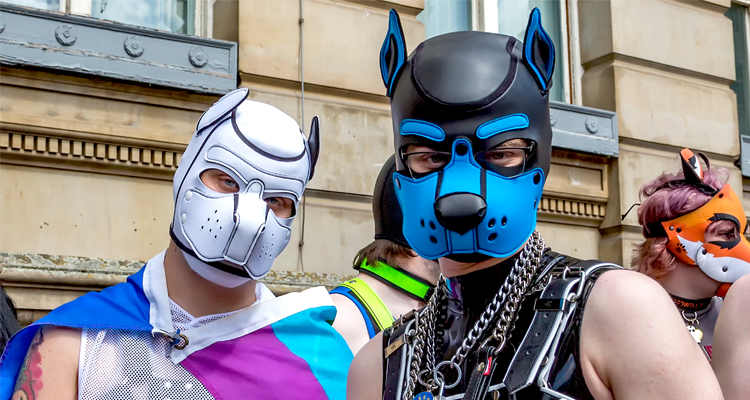 People are Pets, Too

In the mid ’80s, I lived in Houston with two cats, two dogs, two enormous koi, and a lover, as we called our mates then, who was the Worst Person Alive. One day, he said something that remains the cruelest thing I’ve ever heard a human being say. I kicked him out the door. A few days later, I attended a conference where I met the Hottest Person Alive. He was the ultimate bad boy: a surfer dude and former International Mr. Leather who had recently moved to town from California.

He turned out to live a few blocks from me and invited me over. I explained I had to feed all the animals and walk the dogs first. He said it was no problem. “I know animals require a lot of caretaking,” he said, “but they keep us happy.” He laughed weirdly. I did my farm work quickly and was at his place well before I lost my erection.

I took a seat on his sofa while he fetched some lemonade. We talked briefly and he explained that he worked for the federal government and wasn’t happy about his transfer. We both hated Houston’s insufferable summer weather. He took off his shirt “to cool down” and slid beside me on the sofa. We were entangled immediately, and I was ready to do it there on the floor. He laughed and pushed me back. “Let’s slow down. We’re just getting started.”

He stood up and shouted, “Come on boy!” A dog bounded into the room, gleefully woofing. Well, not really a dog. It was a younger guy wearing a collar, a harness, a disconcertingly eerie leather dog mask (or “hood”) and a butt-plug tail emerging from his jock-strapped ass. This is now a fairly common sight in the leather community, but in 1985, I’d never seen anything like it. The dogboy, also wearing leather paws, continued to bounce around playfully while the former International Mr. Leather talked to him in that annoying infantilizing language you use with pets: “Yes, you’re a good boy, that’s right.” The good boy nuzzled my hand for some petting. I was dumbstruck, but laughing. He told the dog to go to his pen — a large wire cage in the adjoining dining room. The dog went inside, stretched out, and watched us.

“You ready to have some fun?” he asked, grabbing me by the throat. We ended up in that kind of power play that made wrestling so much fun when I was a kid. I’ll spare you the details, but at some point, the dog trotted into the middle of the room, softly panting until my future ex fuckbuddy gave him some command that gave him permission to join us. He rolled around, lovingly biting his trainer and a veiny chew toy … you get the picture. When I returned to my small house — the one from which I’d banished the Worst Person Alive — I got into the king-size bed with Czara, Flannery, Chester, and Margaret. Was I their master or their furry toy? When the Sweetest Person Alive, my first partner, who was dying of AIDS, called me, I asked him, “Did you know that people are pets too?”

In the years since then, so-called pup-play has become a huge movement in Europe and America. It is no longer necessarily limited to fetish play. It is as often described as a social activity in which younger queer men are mentored by dominant “handlers.” Pups get together to play in groups — a “mosh.” They wear hoods that are often goofy and colorful. Lest you think this is all a dark secret, check out the League of Atlanta Pups’ Facebook page. There is also the global Furry Fandom of people who dress up as animals, some for sex, some not. Furries apparently do not have a power-based hierarchy like the pups and handlers. Furries aren’t pets.

All of this brings to mind the common play of children, the world’s mythology and folklore, pagan rituals, fairy tales, and cosplay. We presently occupy a planet that is environmentally doomed (thanks in part most recently to the Supreme Court). Consciousness, once thought to be purely human, is now regarded as something that arises in the natural world and can be shared and explored through the imagination with any being or object. Thus, occupying animal presence can literally be therapeutic. As a kink, pup play may be regarded as loony sex — it’s not bestiality — but I’m here to tell you that there is no such thing as “normal” sex. No other human behavior comes as close to revealing the mysterious, eccentric animal heart of the world.

So, what happened with the leather surfer and his full-time pup? I visited frequently during the following month or two. Then one day, I received a letter from the IRS informing me that a lien had been put on my car. I appealed the decision and was summoned to a meeting. I walked into the auditor’s office and — I’m not lying — he turned out to be Mr. Leather Surfer.

“You are going to remove this lien,” I told him firmly. “Do you understand that?”

“No,” he said, “I don’t understand that. I’m completely in charge now. Get out of my office and learn to be more responsible.”

Thanks a lot, dawg.