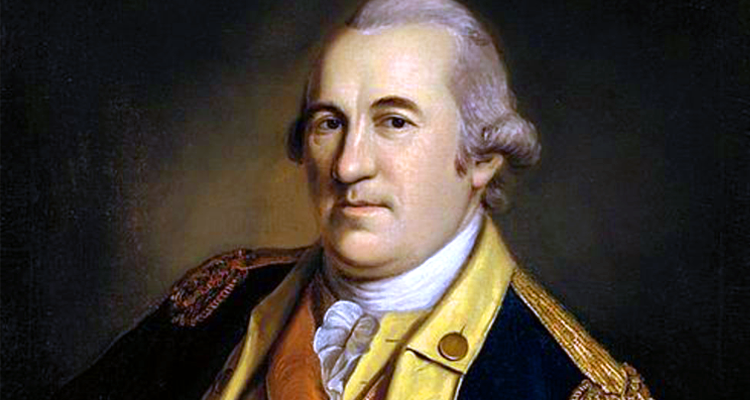 The Baron Who Was Mars Personified

If grammar school coverage of the Revolutionary War was dull to you, clearly no one mentioned Baron Friedrich Wilhelm August Heinrich Ferdinand von Steuben, the dashing and openly gay Prussian general who whipped a ragged gaggle of disheartened and defeated colonial men into soldiers with the cohesion and discipline needed to win.

Born in Magdeburg, Prussia, Holy Roman Empire on September 17, 1730, von Steuben attended military schools and then saw military action, as this was a period when Europeans were killing each other. This included the Seven Years War (1756–63), where Steuben was wounded and taken prisoner by the Russians.

Returning to Prussia in 1762, he became an aide-de-camp to the heroic and openly gay Frederick the Great. He was then admitted to the King’s personal class on warfare, the world’s most elite institution for learning methods of war and the complicated art of leadership.

But an unknown rival poisoned the waters, charging he had “taken familiarities” with young boys. While untrue, Steuben was released from the army. And with Europe now officially at peace, he was unable to secure employment for his exceptional skill set.

On September 26, 1777, the Baron, his large and well-loved Italian greyhound Azor, his military secretary, and his aide-de-camp boarded a ship to America to serve in the Revolution.

Ambassador Benjamin Franklin had met with Steuben in Paris and written a lustrous letter of introduction, which the Prussian presented to the Continental Congress.

Congress had wearied of the stream of Europeans who’d presented themselves with demands for ranks and monies well beyond those accorded homegrown officers, so Steuben volunteered to work for free until the war was successfully prosecuted.

A soldier famously wrote that Steuben’s arrival was like witnessing “the ancient fabled God of War … [this] perfect personification of Mars [with] the trappings of his horse, the enormous holsters of his pistols, his large size, and his strikingly martial aspect.”

At Valley Forge, Washington appointed Steuben temporary Inspector General. The Baron was horrified by everything he saw. The men didn’t even know how to use their bayonets, and they were so ill-provisioned that graft, war profiteering and incompetence were obvious. Steuben changed all that.

There would be no unit cohesion without proper drills, so Steuben wrote in French, and his secretary translated into English, with help from Alexander Hamilton. Captain Pierre Charles L’Enfant illustrated.

The text became the Blue Book, the Army’s training manual for many years. Some portions remain in place even today.

Steuben was a strict drillmaster who raged and cursed in three languages, but he advocated for the men and also socialized with them. (He famously hosted a “no breeches’ dinner party.)

While all seemed acceptable for the dashing Steuben, a charge of sodomy was laid against Lt. Frederick Gotthold Enslin with his commanding officer Lt. Col. Aaron Burr. Enslin was dismissed and drummed out of the camp.

“Drumming a soldier out of the Army was a dramatic event,” Randy Shilts writes in “Conduct Unbecoming: Gays and Lesbians in the U.S. Military.”

“According to custom, an officer’s sword was broken in half over his head, while drummers played a very slow tattoo. So did Lt. Enslin leave the Continental Army on that cold morning in March … not far from where Major General von Steuben was shouting orders in broken English.”

Upon the peace, Steuben was granted land by the states of New York, Pennsylvania, and Virginia, and became an American citizen. With aides William North and Benjamin Walker, he moved to New York.

According to History.com, von Steuben legally adopted North and Walker, “a common practice among gay men in an age before same-sex marriage.” They lived together, and the two managed his finances and inherited his estate when he died in 1794. John Mulligan, von Steuben’s secretary, also inherited the baron’s library and some money. Mulligan was also gay, and the two were thought to have a relationship.

In his will, von Steuben also stipulated that “If the Negro Man Nathan is living with me at the time of my Decease, he shall be then be set at Liberty” and “my Dog called Azore I desire may be delivered to Mrs. Washington.”

Many have erected statues to von Steuben as well as named things for him, including ships, cadet barracks, counties, and even the city of Steubenville, Ohio.