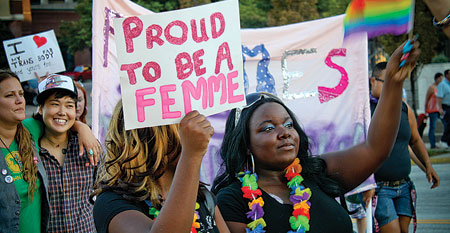 From making pasties so women can march topless to holding a dance party after the marching is done, this year’s Atlanta Pride Dyke March seeks to reach back to its more radical roots.

“We’ve been working with Atlanta Pride to make it a bigger and better Dyke March — we want to start the ball rolling so it becomes bigger and bigger each year,” said Kiki Carr.

The march is open to all women and is trans inclusive — the word “dyke” is not meant to scare anyone off. In the past, men have also marched.

“Having a march for lesbians is a way to show our power in the community,” Carr said.

Carr, who lived in San Francisco for 10 years and remembers marching with 10,000 other women in that city’s annual Dyke March, said the event was like Christmas and Halloween and her birthday all wrapped up into one day.

“I want it to be radical,” she said of Atlanta’s Dyke March. “But I want it to be also for people who don’t consider themselves radical. While I think those that are organizing the march this year are radical, that’s definitely not where we are putting the focus. It’s more important for us to be inclusive.”

This marks the first year the Dyke March will have a Grand Dyke Amazon. Pat Hussain will lead the march seated in a convertible. Hussain was co-leader of Olympics Out of Cobb, which was instrumental in keeping the 1996 Atlanta Olympics out of the suburban community after the county commission passed a resolution denouncing the “lifestyle advocated by the gay community.” Hussain is also a co-founder of Southerners on New Ground.

“We have a logo for the first time and we’re looking for volunteers — we’re hoping to have baton twirlers and flag twirlers and a drum corps from the Atlanta Freedom Marching Band,” said Carr.

Before the march, there is a “family” picnic at the Piedmont Park dock starting at 3:30 p.m. where people will make pasties (so women who want to can march topless, a longtime tradition of the Dyke March) and compete in a peach eating contest. The winner will be selected on how “artfully” she can eat a peach, Carr said.

Costumes are encouraged and this year community groups are invited to march together.

There will also be a “Disco Dyke” dance party after the march at the Bud Light Stage with queer DJ Speakerboxx spinning the beats.

Donations are sought to offset the costs of this year’s march and can be made by visiting atlantapride.org and marking your contribution for the Dyke March.