As I sat to write, the City of Atlanta is gearing up for a busy weekend of queer activity. The headlining event of Labor Day weekend, Atlanta’s Annual Black Gay Pride celebration, is sure to attract tens of thousands of the “Children” to what is considered the largest Black pride festival in the world.

Throw on top of that a joint Georgia Equality/HRC sponsored protest and picket of local Target and Best Buy retail stores taking place on Saturday, bringing awareness to their recent flush donations to support a Minnesota gubernatorial candidate running on an anti-gay platform, and the fact that many will be toasting the end of summer in style during the ensuing three-day weekend, and it seems like every queer in the metro area will have something do. 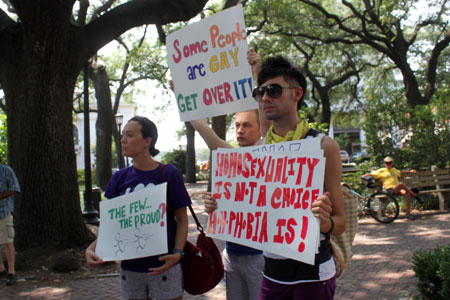 Under the shade of oak trees on Johnson Square in the historic district of Savannah, Ga., with City Hall as a backdrop, dozens of LGBT activists gathered June 20 to express outrage over the recent alleged beating of a gay man by two U.S. Marines.

While the incident remains under investigation, it raises serious questions about homophobia in the military — which will face significant scrutiny if “Don’t Ask, Don’t Tell” is repealed — and whether Georgia needs to finally pass a state hate crimes law.

The purpose of the rally was to bring attention to the need for a state hate crimes law and to demand that city leaders address violence against LGBT people in Savannah, said Kevin Clark, Savannah chapter director for Georgia Equality, the state’s largest LGBT group.

UPDATED: FBI in Atlanta investigates beating as possible hate crime while the military releases a statement.

A gay man in Savannah was attacked early Sunday by two Marines who face misdemeanor battery charges. The alleged victim, however, tells police he was the victim of a hate crime and is disturbed Georgia remains one of only five states without a hate crimes law.

The Savannah Morning News reported today that Keil Joseph Cronauer, 22, and Christopher Charles Stanzel, 23, were arrested in the serious beating of 26-year-old Kieran Daly. Cronauer and Stanzel are stationed at Marine Corps Air Station in Beaufort, S.C., the newspaper reported.