How to eat like a queen on a peasant’s budget 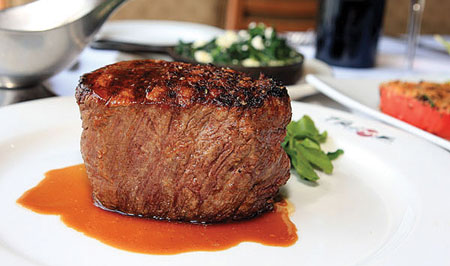 There is one efficient way to save money and still eat at nice places. Take advantage of the specials during the week.

The Here to Serve Restaurant Group, known for its restaurants’ architecture, has some of the best during-the-week deals. For example, on Monday at Noche you can get really good $2 tacos which normally run $4-5.

We went to the Vinings location, which has a charming, darkly lit, cantina vibe. We ordered all the tacos, which consisted of shrimp with black beans and roasted corn; crispy fish with spicy slaw; grilled veggie with charred tomato salsa; and the grilled chicken with chunky house-made guacamole. My favorites were the pulled pork with fire roasted chilies and jack cheese, and the marinated steak with pepper-jack cheese.

I kept reading about Noni’s Deli on all the Best Of lists but had never been. “Noni” is a derivative from “Nonna,” which means grandmother in Italian, and many of the recipes were originated by the owner’s Sicilian grandmother.

We went late after our Atlanta Executive Network meeting and were starving. I’m not in college anymore and I can’t do late night Taco Bell. Noni’s is an excellent alternative to the typical greasy after-hours gut bombs you get on Ponce. The place was full of urban hipsters, GSU and Agnes Scott students, and maybe gay couples – you can’t always tell these days. If you live in Midtown, it’s worth the drive.

The place used to be an old school grocery store but has transformed into a very relevant downtown destination that stimulates your eyes with architectural nuisances. This is an excellent first date place. You know that awkward first 20 minutes where you want to ask “what’s wrong with you?” but instead you make small talk? Say, “ I love the shiny jagged slate floor and I’m a sucker for red exposed brick,” and you’ll impress your date or long time partner. It’s always a good idea to have subjects rehearsed when the conversation lags. 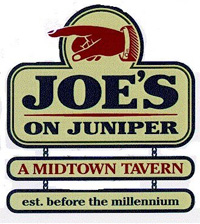 The beer is great, but you don’t have to drink to enjoy these neighborhood hubs 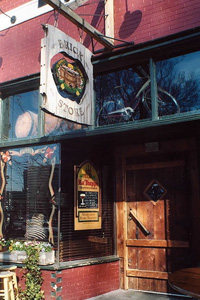 You don’t have to drink to enjoy a good neighborhood bar experience. It’s like in Olde England where the pub was the heartbeat of the community. It’s nice to have a grassroots communal experience. These two taverns aren’t about raucous screaming drunks, but rather the convivial, connective atmosphere a good pub can deliver.

Open for over a decade, the Brick Store Pub is a vital, nostalgic stop in Decatur. Many Atlantans think of Manual’s Tavern first when looking for a quintessential pub experience, but that place is hyper straight. Brick Store’s owners know they are surrounded by Decatur’s culinary gems, so they had to up their game and not serve tired stock bar food.

The scene is mainly straight, but Decatur is the Berkley of the South, so no one cares what you are. It’s the kind of straight folks that like gays because they know we move in and increase property value. The décor is classic red exposed brick. 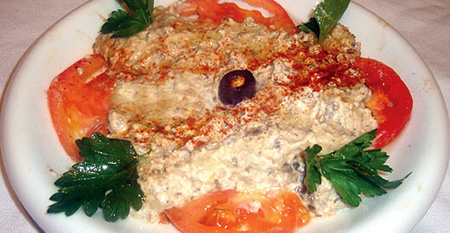 My first partner lived around the Emory – Toco Hills area so we frequented the restaurants near us. Sadly, Mexico City Gourmet closed as did Anarkli, which was the place I first tasted Indian food, which soon became an obsession. Is there anything better than chicken tiki masala on fragrant basmanti rice? We’ll save that for another column.

I was recently in the neighborhood and passed by Athens Pizza. This place is a true anchor of the area as it’s been open since 1977, owned by John and Aseimoula Papadopoulos. You’ll see the authentic urban melting pot from the elderly patrons who have been going there for decades to young Emory students. We chatted with a lovely lesbian couple while their cute adopted Asian daughter laughed with my partner’s kids. How’s that for modern family.

The non-corporate restaurant is very Greek kitschy with Mediterranean murals and is staffed with congenial employees who’ve been there for years and actually seem to care if you have a great experience. Yes, food snobs, this is not the best Greek restaurant in Atlanta — it’s not Buckhead Life’s Kyma — but the point is you can have an affordable, relevant culinary experience. 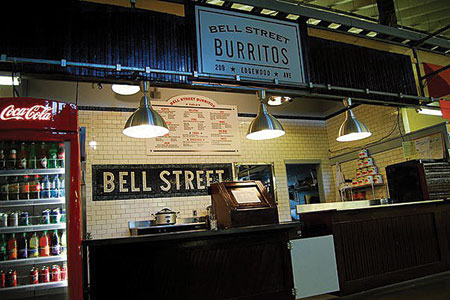 We have a historic gem in our city called Sweet Auburn, and I’m sure somewhere in the South there’s a drag queen with the same name and she’s fierce.

Whatever craving you have can be found here.

Like any good Southern drag queen, Sweet Auburn has character and charm. You get a sense of historic Atlanta while the convivial merchants are only too happy to guide your palate into simple satiation or splendid nirvana like the Sweet Auburn Bakery, with transcendental strawberry cheese Danish, or Miss D’s New Orleans Pralines.

Urban Cannibals allows people to ‘feed off’ each other’s energy

Owned and operated by wife-and-wife team Calavino Donati and Doria Roberts, Urban Cannibals Bodega & Bites opened on Dec. 1, 2009, and continues to feed the masses seeking something off the beaten path.

“Urban Cannibals was originally the name of a sandwich shop Calavino owned in 2000. We revived the name, added ‘Bodega & Bites’ so people knew what we were, and created the concept of the store around the idea of urban pioneers ‘feeding off’ each other’s energy through exchange of ideas, goods and services all while being responsible stewards of themselves, their communities and the planet (in that order),” says Roberts, who is also a critically acclaimed local musician and artist.

As a bodega, which means small grocery store, Urban Cannibals also has a small deli, run by Donati, and a bakery, operated by Roberts. The store is set to appear on the Food Network next month on the show “Meat & Potatoes, Hosted by Rahm Fama,” featuring Donati’s renowned Urban Reuben. 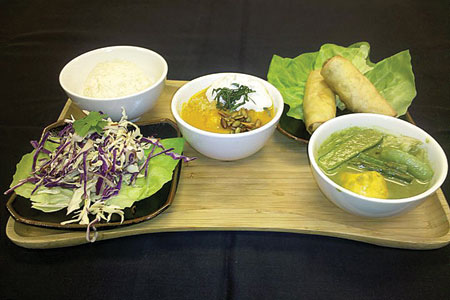 If you made a resolution to eat healthier food and have a positive outlook on life, then World Peace Café is the perfect place to start your year. Luckily we made it there before the snow-pocalypse. It’s a vegan/vegetarian café built on donations and run by volunteers. The café is owned and operated by Kadampa Buddhist Center, so the restaurant will reward you with peaceful karma and healthy cuisine.

The café has a modern Buddhist temple feel with high ceilings and hanging Asian lanterns. They’re open for breakfast, lunch and dinner Monday-Thursday from 7 a.m. - 9 p.m. and Saturday and Sunday from 10 a.m. to 3 p.m.

I’ve only tried lunch and dinner but their breakfast menu looks unique with “Corned Peace Hash and Eggs” and Vegan Cranberry-Orange Pancakes. For lunch I had a hot and spicy vegan burger made with roasted veggies, topped with a zippy buffalo sauce and melted bleu cheese. The flavor of this healthy burger was explosive.

It’s a chilly night, you’re broke because of the holidays and you want a fabulous flavorful meal. Head to Little Bangkok on Cheshire Bridge Road, voted best Asian by Creative Loafing. This is one of Atlanta’s original Thai restaurants and is a perfect little dive on the eclectic “Bridge.”

Little Bangkok has been open for 17 years. It’s another circumstance of gays leading the food trends in Atlanta. Now Thai is on every street corner. If you had a gourmet grandmother who was Thai this would be her place. It’s decorated in kitschy far eastern décor with laser fast precision service. There is usually a wait and no waiting area but the line moves fast.

Little Bangkok has excellent specials like the soft shell crab or whole fried fish, but I’m a creature of habit and tend to gravitate toward my comfort favorites. Start with the classic basil rolls with thin rice paper, shrimp, and glass noodles dipped in the Asian BBQ-like hoisin sauce. 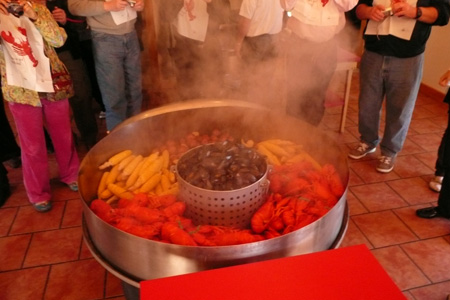 Classic Americana is my pick for the New Year’s trend in travel. A themed trip through the past is the perfect way to take your mind off whatever is presently bothering you. Retro retreats, classic road trips, and theme hotels create the stage for fantasy vacations that will satisfy any figment of your imagination.

Americana road trips are easy to plan, go light on your wallet and create vivid memories. Decide on your trip’s theme and lay out the route with a Google map. The Trails of Bonnie and Clyde is my latest client request. I put them in a vintage Ford Deluxe Sedan and sent them out to stops including the Ambush Museum in Gibsland, La., and Bonnie & Clyde’s Diner in Shelbyville, Ind. Hotels range from roadside kitsch to the luxurious Eldorado Shreveport.

Route 66 remains the Mother Road of car trips. “Get your kicks on Route 66” with 2,000 miles of fabled Americana from Chicago to Los Angeles. Even with the Grand Canyon as a centerpiece, Route 66 is not found on modern maps. The two lane byway was out paced by the eight lane highway. But the classic motels and Chicago back streets still make it the best of the best road trips. Rent a VW camper for this one.