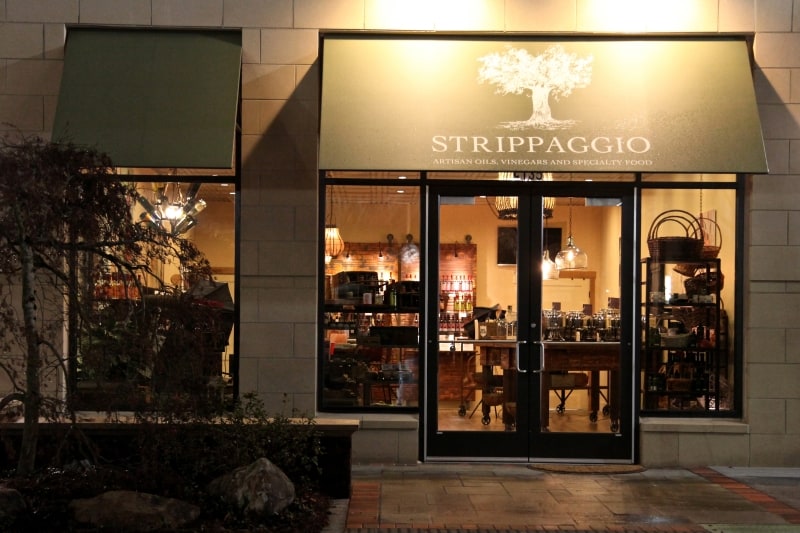 For most of us, the uses for a bottle of olive oil are basic: It’s the base for a tasty salad dressing, a quick dip for a hunk of bread, or even a simple facial moisturizer.

Celia Tully sees so much more.

Her voice almost lilting, she stood explaining the nuances of the fragrant oil recently in the Emory Point olive oil and vinegar bar where she’s committed to elevating the side feature to the main culinary attraction.

Delicate flavors are best for cooking, while denser ones – which will be damaged by heat – should be used for dips or other minimal preparations, she explained before pouring out a shot-sized sample of lemon-flavored oil. Once swigged, the unusually smooth-textured, abundantly flavorful oil made it clear why the store is called Strippaggio – a term describing the sound made by olive oil tasters slurping to extract every ounce of flavor.

“People are astonished when they taste real extra virgin olive oil,” she said proudly, adding that some customers joke that she has ruined them on grocery store oils.

The boutique is the latest manifestation of a foodie trend that’s seen the once basic kitchen oil elevated to center stage, popping up as the focus of specialty shops from Vinings to Norcross. It comes as everything from Food Network to finances encourage people to be more creative in the kitchen. It’s a shift that’s also helped this queer entrepreneur realize a professional dream.

“Wellness and culinary things were always my passion,” said Tully, who started her first business, Natural Body Spas, with partner Cici Coffee in the late ‘80s. “So I took my passion for wellness into the spa industry and my passion for culinary (things) in here.”

“Here” is 900 square feet of olive oil heaven tucked alongside shops and eateries near Emory. On one side, gleaming silver tanks house ready-to-sample blends infused with rosemary, basil and other flavors. Off in a corner, turmeric honey and specialty vinegars mingle with gift sets and even olive oil lip balms, while near a window, shelves hold mango wood vases, homegrown salts and other specialties.

Tully proudly sells some 20 olive oil blends, sourced from farms she personally visits and inspects. At over $15 a bottle, Tully said she wants to ensure her oil is high quality.

“All good olive oils should have a little bit of a peppery finish,” said Tully, whose more unique blends include a bold jalapeno oil.

Tully opened Strippaggio in 2012, when she was an advancing home cook and a self-described “olive oil snob.” At the time, Tully said, it was difficult to find an olive oil shop inside the Perimeter. Nowadays, one need only throw an olive in Atlanta to find an oil boutique. In fact, there are believed to be at least 1,000 specialty olive oil boutiques across the country, according to the Olive Oil Times, an online industry magazine.

The sample bars are popping up as American production of this oil, historically dominated by Italian producers, reaches its stride. Experts point to the popularity of the so-called Mediterranean diet, which touts the benefits of high-vegetable, olive oil-rich eating.

Tully herself links the explosion in popularity to two things: The economy and TV. She said cable shows shows like “Chefography” and “The Mind of a Chef” planted the seed in the minds of home cooks. When the market tanked a few years back, she said the stage was truly set.

“During the recession, people were staying at home more, they were watching those shows,” she said. “They weren’t going out to eat as much and I think they were looking for good quality ingredients to cook with to create some of those recipes.”

Four years ago, Tully jumped on the trend. It wasn’t her first time riding a business wave: In 1989, she and her partner capitalized on the burgeoning personal pampering trend to launch Natural Body Spas. They have since expanded to include locations across Georgia, Tennessee and Florida. Along the way, Tully did stints in different sectors of the medical field, all the while maintaining her interest in cooking and health.

In 2012, Tully decided to jump in and hasn’t looked back. Not that anyone would want her to: She recently expanded to include a Midtown shop to accommodate a growing audience that includes tourists and foodies looking to kick their cooking up a notch. Tully obliges with olive oil tasting tours and tips to help the average person understand the subtleties and influence of a good oil.

Back in her Emory Point shop, Tully virtually beams as she describes some of her latest additions, including an earthy smelling pecan truffle oil infused with actual Georgia truffles. Trained through a combination of seminars and olive oil schooling, Tully is a virtual encyclopedia of oil facts – from the rules of what makes an oil extra virgin to the source of the tingling finish in a good oil (it’s heart-healthy polyphenols).

For those who aren’t ready to try a fancy oil, she encourages experimenting with something more economical, such as a grapeseed or avocado oil. Once you’re ready to upgrade, she said, give her a call.