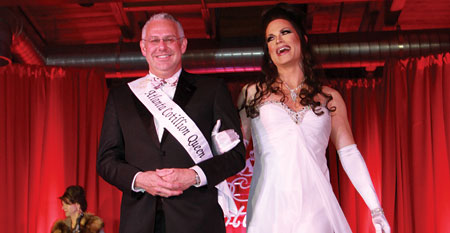 AID Atlanta celebrates “11 years of royalty” with the annual Atlanta Cotillion on Saturday, Sept. 15, at 7 p.m. at The Foundry at Puritan Mill in Atlanta.

“The cotillion is a fundraising event based off of a traditional Southern cotillion,” says Steven Igarashi, Gay Men’s Health & Wellness Coordinator at AID Atlanta. “Each year, there is a class of debutantes that is made up of men from the LGBT community. They volunteer to serve as a debutante and create a persona, which is their drag character. They spend cotillion season raising money for AID Atlanta.”

As with a traditional cotillion, these debutantes will be presented at the ball by their escorts to celebrate their fundraising success. The evening culminates with the crowning of the Queen of the Atlanta Cotillion Ball, the debutante who raised the most for AID Atlanta.

Event Chair Ronnie Mallette had a specific goal in mind for this year’s event.

“I wanted to make sure that the event would be something that the straight community would want to get involved with. In past years, it was a requirement for everyone who attended to dress in drag. Then, we allowed some to come in tuxedos but only a certain percentage. This year, we aren’t enforcing that,” Mallette says.

Attire for Cotillion can pose some interesting questions, but the one most asked of Mallette is this: Why do gown seats cost $85 but tuxedo seats cost $160? “We wanted to make it cheaper for the people in drag since they spend so much to look gorgeous,” he answers.

In addition to the traditional cotillion components, the entertainment includes drag star Varla Jean Merman and celebrity impersonator Randy Roberts, known for portrayals of Cher, Bette Midler and others.

Igarashi describes the event as “huge” for AID Atlanta.

“The money that it generates is crucial to the work that we do. The amount of money that these few individuals raise each year is typically over $100,000. When you think about how much money is being raised by such a small number of people, it says something about the commitment of these men to the cause of AID Atlanta and their passion for it,” he says.