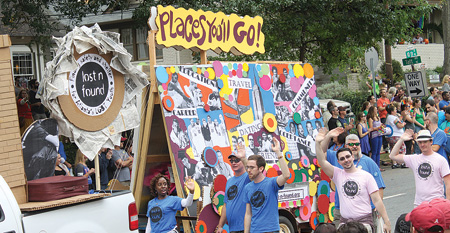 To commemorate the one-year anniversary of Lost-n-Found Youth, the organization’s executive director plans to spend 48 hours on top of a box truck to raise awareness of the plight of LGBT homeless youth in Atlanta.

Rick Westbrook, executive director of Lost-n-Found Youth, plans to stay on top of the truck from the afternoon of Nov.6 until Nov. 8. He will document his experience through Facebook posts, Twitter updates and perhaps a live video stream to give a glimpse of what homeless youth experience when forced to live on the streets.

The truck will be parked next to Brushstrokes in the Ansley Square shopping center. Westbrook said he will climb aboard the truck one hour before the polls close on Election Day. He will come down for a short time to attend a town hall meeting on Nov. 7.

“I will be there rain or shine,” Westbrook said.

With access to the empty truck, Westbrook said he and the other volunteers of Lost-n-Found hope the community will fill it up with coats, underwear, socks, canned food and gift cards.

Westbrook said he will attend the town hall meeting coming straight from his stay on the truck “so it might not be pretty” and then will return to the truck afterwards for another 24 hours.

The Atlanta Sisters of Perpetual Indulgence announced at a town hall meeting last November that its members would form a new organization in Atlanta to serve LGBT homeless youth who were falling through the cracks of other organizations.

First named Saint Lost-n-Found, the group changed its name to Lost-n-Found Youth and just this month received its own non-profit status as a separate entity from the Sisters of Perpetual Indulgence.

Since that town hall in November through today, the organization — completely volunteer run — has staffed a 24/7 hotline for youth who are in immediate need of housing and also maintains a six-room home.

In its first year, the organization has helped some 100 young people find housing, jobs, get dental and health care, clothes and a sense of empowerment.

The town hall meeting on Nov. 7 will update the community on what Lost-n-Found has accomplished and also explain where the group still needs help to serve LGBT youth, Westbrook said.

The organization holds regular fundraisers, including the monthly Big Gay Game Show at Jungle, which typically raises approximately $1,000 and pays the rent for the group home.

But Westbrook and the Lost-n-Found board of directors are determined not to accept state funding or grants because they do not want the organization to be forced to follow strict guidelines of who and how they can help. That’s why donations from the community are so important, Wesbrook said, noting that a great time to give is when he is camped on top of the truck.

“It really is the beginning of our second year of funding so If people want to bring cash, checks, loose change — I will make sure it gets used to its fullest potential,” Westbrook said.

Top photo: Lost-n-Found Youth’s float in the Atlanta Pride parade had the theme of ‘The places you’ll go!’ (by Dyana Bagby)