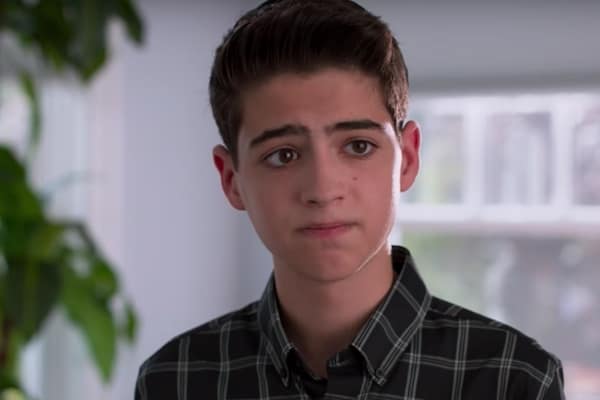 Disney Channel’s “Andi Mack” will air a historic episode for the channel which includes a character on its tween show “Andi Mack” saying the words, “I’m gay.”

Cyrus Goodman, played by Joshua Rush, comes out to one of his best friends Jonah Beck (Asher Angel) in the episode “One in a Minyan.” When Cyrus’ grandmother dies he invites his friends to attend her shiva. Cyrus begins explaining to Jonah all of the food that’s been brought before making his announcement.

This is the first time a character has spoken the words “I’m gay” on the Disney Channel.

“Andi Mack” writer Jonathan Hurwitzh, who is also gay and Jewish, told GLAAD that Cyrus’ coming out story was inspired by his own real life coming out.

“In the writer’s room, I shared a personal story about how nervous I was to come out to a college friend back in 2010. While grabbing burgers one afternoon, he asked me to pass the ketchup, so I handed him the bottle while mumbling the words, ‘I’m gay.’ He looked up at me, said ‘Cool,’ then proceeded to put ketchup on his burger as if I hadn’t just revealed my most personal, deepest truth. I remember thinking: ‘That’s it?! After a ten-year journey to come out to myself, I finally come out to my friend and all I get is a ‘Cool?!’ But what I ultimately realized was that my friends and family loved me unconditionally before I’d even learned to truly love myself,” Hurwitzh says.

Rush praised the show for the way it handled his character’s coming out moment.

“Every day is a blessing working on this show. This milestone is just another stitch in a rich and vibrant tapestry that is Cyrus Goodman,” Rush tweeted.

Every day is a blessing working on this show. This milestone is just another stitch in a rich and vibrant tapestry that is Cyrus Goodman. https://t.co/dTSBdop7UJ

Cyrus’ storyline was met with warm reception from some fans excited to see LGBTQ representation on Disney Channel.

Cyrus Goodman is the first gay character with a coming out storyline on Disney Channel. He just made history again by using the words "I'm gay" on the show.

His journey has been so important and validating, and it's not over yet. Please watch and support Andi Mack #RENEWANDIMACK pic.twitter.com/eSbyiVYLKx

The episode airs on Friday at 8 p.m. on Disney Channel.

Watch the “Andi Mack” cast discuss the monumental moment below.