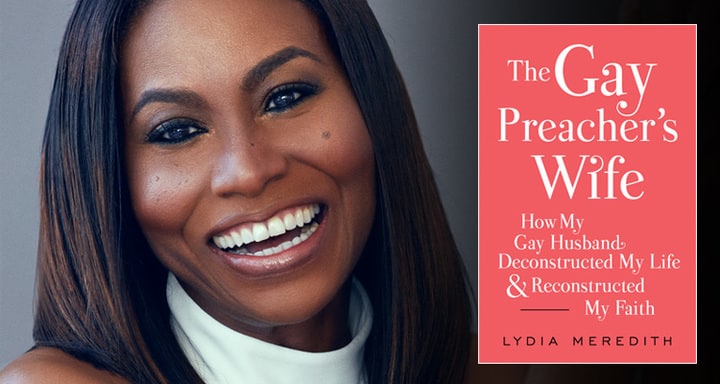 Atlanta LGBT advocate comes out as ‘The Gay Preacher’s Wife’

Lydia Meredith didn’t set out to become a LGBT advocate.

But after learning she was both married to and mother of two gay men, Meredith knew she had a new path to forge. Her story is chronicled in her new book, “The Gay Preacher’s Wife,” published last fall.

“People are buying the book and women are coming to me and telling me they are in the same situation that I was,” Meredith said. “I know at this juncture of my life I am supposed to be deconstructing social structures that oppress people and create injustice and come speak truth to power, so that these platforms that are used to oppress people are dismantled.”

Meredith was married to her husband, a pastor, for 13 years when he came out to her as bisexual, and 17 years later as gay.

“I could have run off the road driving, but I managed to keep the car in the proper lane and I thought, you know, that I was dreaming or something,” Meredith told Georgia Voice. “He was having an affair with a man. … He wanted out of the marriage.”

His partner worked at the school Meredith runs for impoverished children in downtown Atlanta, and she said she had no idea he and her husband were together. Another plot twist to her family’s story: One of her three sons came out in college, and later revealed he was HIV positive.

It was then that Meredith decided she had to become an advocate.

“When my son came out — not when my husband came out. I didn’t want anybody messing with my baby,” she said. “I had seen HIV/AIDS. At my school, we teach sex education to teens and we teach gay and straight kids. We teach children the dangers of making decisions that could cause them to be infected by disease that could plague them for the rest of their lives.”

She began reading books and literature on parenting LGBT children, but she didn’t quite know how to help her son. So she went to seminary school.

“I had to get some understanding on how the gay issue has just torn my family apart. My whole family is now in discord because the patriarchy has left the home,” Meredith said.

Meredith learned that the idea of God hating gays didn’t amount to much in the world of religious academia.

“None of it is debated among theologians and scholars who have studied this for years and they have not made the same decisions that evangelicals have made,” she said.

It was through their religious beliefs that Meredith’s family was able to be reconstructed.

“My ex-husband brings his partner to family events and we are able to do that because of forgiveness and because faith teaches us that’s what faith requires,” she said. “At first, right after my ex-husband left the home and I had to spend Thanksgiving by myself … I made up in my mind that I had to get some help. I had to find me another church and I ended up at Buckhead Church. The pastor did a series on forgiveness and I listened to that sermon and I put it into practice.”

Meredith invited her whole family over for Christmas dinner, and even went over to her ex-husband’s home to break the ice beforehand.

“I was surprised they did come, but it was amazing. We ended up, after the Christmas dinner, doing the ‘Electric Slide’ and playing cards. It was amazing, but I was just doing what the pstor said to do,” she said.

Meredith said it’s no coincidence this is her life story.

“I think it was ordained to happen to me. If it didn’t happen to me, I wouldn’t have a voice. I can dispel so many myths just by the life that I live; married to a bisexual man and birthing and raising a gay son,” she said.

The book started out as a therapy of sorts.

“I needed something therapeutic, and writing was a way to do that. I started writing and then I finished writing and after I got someone to help me with the book and help me get a publishing deal, then I said to myself, ‘Lydia, this story can help people. It’s not something you use just for your own self-cleansing,’” she said.

She hopes her book will provide another perspective to the faith community. She believes what’s needed now is a new kind of ministry.

“A ministry that’s seeped in the first-century church that was started by persecuted Jesus followers and it was free of bias, free of prejudice, free of abuse and oppression and was marked by a loving God and loving others and social services,” she said. “That’s the key to social transformation and world peace, teaching that God’s love is inclusive.”