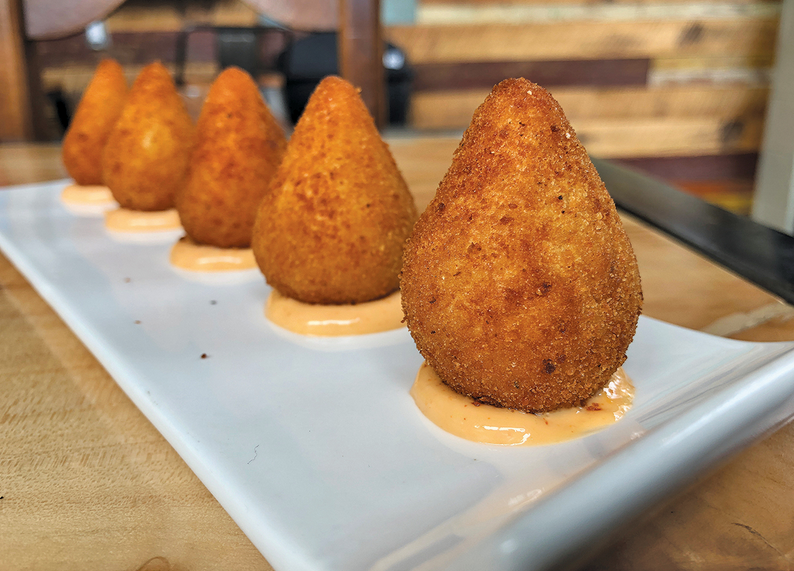 Brazil on the Beltline: Buteco

Cliff Bostock
Culture
November 20, 2018
You remember 1965, right? You couldn’t possibly be gay, you would later think, because you totally hated Barbra Streisand, who won a Grammy for the song “People” that year. I mean you were a bullied kid and, unlike Babs, you did not think people who need people were very lucky. On the other hand you were excited when “Getz/Gilberto” won album of the year, mainly for the bossa nova hit, “The Girl from Ipanema,” a lament about being invisible to someone you have a crush on. It kind of made loneliness weirdly beautiful. Then the song became a cliché. Oh well.
The memory of that year came back to me as soon as I stepped through the door of Buteco, a new Brazilian coffeehouse-bar in the Beacon Atlanta, a Beltline-hugging development in Grant Park. A black-and-white video of the original “Ipanema” performers was silently projected on a wall while the voice of Nina Simone emanated from a turntable. Such visual and auditory imagery fills the café, from its maple bar and weathered-wood walls to its blasts of colorful tile on the patio to its plates of shapely street food and super-smooth coffee drinks.
The café’s owner, Rafael Pereira, grew up in Sao Paulo, Brazil’s largest city, but graduated from Georgia State’s music program. He has been performing professionally as a percussionist here and around the world for 10-plus years. In 2015, he started his own label, Tribo Records, to produce contemporary music that draws on a variety of Latin American musical forms besides Brazilian. The café hosts live music many nights and plays host to the local music industry on Mondays. Check the website for details.
Now, about the food. The kitchen here is kind of a shocker. It’s actually a food truck permanently parked a few feet from the building. It prepares about a dozen street food “bites” daily. I’m going to be honest. During my first visit, I was disappointed. Except for caldinho de feijão, a very tasty black bean puree with crunchy bacon and tiny croutons, most of the food was no hotter than tepid. Since most of our choices were deep-fried croquettes, the interior ingredients were all congealed texture and little taste.
That changed altogether when I returned. I told Pereira about my earlier meal (and why I was there). He was not altogether surprised, explaining that the kitchen was having difficulty keeping the plates warm in the food truck, thus probably causing the congealed interiors. Perhaps, but in any case, I ordered two plates of croquettes and they were about 100 percent better. Everyone’s favorite, according to a bartender, is the coxhina, made with pulled chicken and mozzarella fried in a fairly thick dough. Five of them, shaped like little pears, are served on puddles of a mildly spicy habanero aioli.  My favorite, though, was the quibe, which is actually a Lebanese croquette (kibbeh) popular in Brazil. It’s made with distinctively flavorful bulgur wheat and beef, served with lime slices, which provide a nice contrast to a faintly minty taste.
Other dishes include odd crispy, cheesy cubes called “tapioca tots” and yucca croquettes stuffed with shredded beef, served with sriracha. There are waffles topped in five different ways, such as pesto, mozzarella, tomato, and basil.
You can swill coffee, starting at 7 or 8am most days and throw back beer, wine, or cocktails made with cachaça until 11pm or midnight. Food is served 9:30am–10pm  daily. The place is a gem. It’s the anti-cliché that the girl from Ipanema desperately needs.
(To read about Tribo and hear some of its artists, go to TriboRecords.com.)
Details
Buteco
1039 Grant St. SE, Suite C-10
404-963-2929
ButecoAtlanta.com