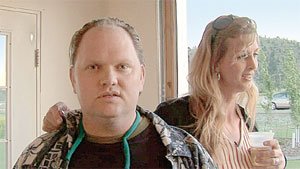 With an appearance on “The Oprah Winfrey Show” boosting the visibility of “Prodigal Sons,” she is also transitioning from anonymous to celebrity.

At the time of the reunion Reed hasn’t been back to Helena except for her father’s funeral. She spreads word of her transition so her classmates will be used to the idea, and the reunion is relatively uneventful. Typically accepting is the man who tells her, “We’re all fat, bald and old, and you’re a girl.”

The movie kicks into gear when Reed’s brother Marc takes the spotlight. The McKerrows adopted Marc at birth and had Paul nearly a year later. Marc was left back in pre-school because of hyperactivity, so they wound up going through school together. Paul was the better student, the better athlete and more popular with the girls.
“Marc would have given anything to be the man I would have given anything not to be,” Reed says in her narration of the film.

Younger brother Todd, a gay architect who lives in San Diego, appears in the film but remains peripheral to the drama of the love/hate relationship between Reed and Marc.

“I knew from the outset that ‘Prodigal Sons’ would be about two stories of identity — my brother Marc’s and mine,” Reed tells the Georgia Voice.

“I had no idea that journey would be as intense as it was, or that I would be pulled back into my history as much as [I] was,” she says. “My past was the last place I wanted to dwell, so I was really trying to avoid it.”

Making peace with the past

Making a documentary seems an odd way to avoid the past, but it helped Reed come to terms with it, after considerable vacillation.

“I see it more as a continuum,” she corrects, “starting with me getting hints of being drawn to embrace my past, then having my history forced upon me in a way I can’t yet handle, then finally making peace with my past by literally giving an emblem of the past [a photo] to my brother.

“So yeah, there’s some back and forth in that process, but I think when we make decisions there is usually a push and pull as one meanders along the path toward clarity,” she says. “I don’t necessarily see that push/pull as contradicting the more general progression. Indeed it’s what keeps the path interesting.”

When Marc was 21, he wrecked his car and almost died. Part of his brain was removed and he has faced problems from the injury ever since, although he’s married and has a daughter. Though his outbursts are generally controlled by medication, two of Marc’s fits of violent rage are caught on film.

Shortly before the reunion Marc had contacted his birth mother, but she died before they could meet; he only saw her at her funeral. She was the daughter of two legends, Orson Welles and Rita Hayworth.

A month after the high school reunion Oja Kodar, Welles’ lover during his last two decades, flies Marc to Croatia to visit her. Reed and her camera go along.

Every time Reed achieves her hoped-for reconciliation with Marc, something sends the relationship south again. Still, when Marc commits himself to a mental hospital and his wife and their mother can’t bring themselves to visit him, Reed goes alone to see her brother.

If “Prodigal Sons” were remade as a drama, actors would certainly line up to play Marc, with Philip Seymour Hoffman (“Capote”) and Christian McKay (“Me and Orson Welles”) as excellent choices. Felicity Huffman could play Kimberly Reed if she hadn’t already played a similar role in “Transamerica.”

Reed says she liked that film, and “the fact that my mom could go and see it with a group of her friends in my hometown.”

“I think there’s a crucial place for films that dissect the trans experience,” she says. “But I think it’s also important to sometimes not talk about L or G or B or T or Q or I issues, and to let them drift into the background of a story so that our LGBTQI aspects don’t comprise the entirety of who we are as people.”

Reed uses the work of her adopted brother’s famous grandfather to explain.

“Prodigal Sons” ends happily for Reed, on and off screen.

“I don’t go back and forth about accepting my past any more,” she says. “I feel like I’ve found a way to make peace with my history, and the images that represent it.

“And that’s a really good thing when you’re on ‘The Oprah Winfrey Show’ and images of your past are broadcast to millions of people.”