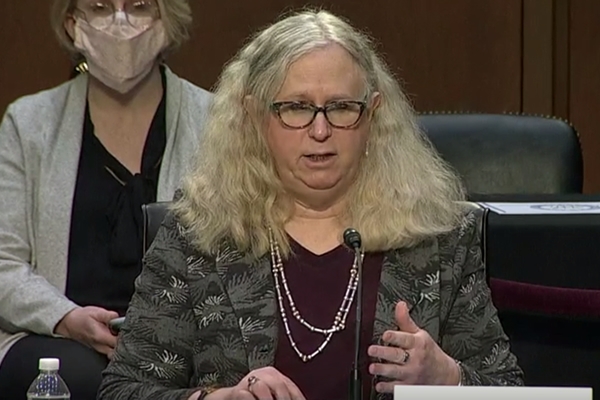 Rachel Levine made history on Wednesday by becoming the first openly transgender person to obtain Senate confirmation as a presidential appointee, sending an unprecedented signal gender identity is not a barrier for obtaining a position in the highest levels of government.

The vote on the U.S. Senate floor, which despite its significance took place with little fanfare after senators largely discussed issues than Levine serving as assistant secretary of health, was along party lines and 52-48. Sen. Maggie Hassan (D-N.H.) presided over the confirmation.

Levine in a statement following her confirmation thanked President Biden for the nomination and the Senate, recognizing the importance of her appointment to LGBTQ people.

“As I prepare to take my oath of office and begin serving as assistant secretary for health, I would like to take this opportunity to address members of the LGBTQ community,” Levine said. “First, thank you. Only through your work and advocacy over many decades is my story possible. I am humbled to be the first transgender individual to serve in a Senate-confirmed position. As Vice President Harris has said, I recognize that I may be the first, but am heartened by the knowledge that I will not be the last.”

One exception to absence of discussion of Levine was Senate Majority Leader Charles Schumer (D-N.Y.), who noted the historic implications of the vote as the start of the morning of the Senate.

“As transgender Americans suffer higher rates of abuse, homeless and depression more than every other group, it’s important to have national figures like Dr. Levine, who by virtue of being in the public spotlight will help break down barriers of ignorance and fear,” Schumer said.

No openly transgender person prior to Levine had ever sought or obtained confirmation by the Senate in U.S. history.

Annise Parker, CEO of LGBTQ Victory Institute, hailed President Biden in a statement for making the historic confirmation for the transgender community happen.

“Yet the importance of this moment extends well-beyond the health of our nation alone,” Parker added. “At a time when hateful politicians are weaponizing trans lives for their own perceived political gain, Dr. Levine’s confirmation lends focus to the contributions trans people make to our nation and deflates absurd arguments calling for their exclusion.”

The assistant secretary of health oversees the department’s key public health offices, a number of presidential and secretarial advisory committees, 10 regional health offices across the nation, and the Office of the Surgeon General and the U.S. Public Health Service Commissioned Corps.

Now that the Senate has confirmed Levine, she’ll be charged with overseeing President Biden’s plan to confront the coronavirus, including the continued distribution of vaccines to make his vision of having a vaccine available to every American by May 1.

Additionally, Levine will be responsible for the Ending the HIV Epidemic that began during the Trump administration. Biden has said he intends to beat the domestic HIV epidemic by 2025, although observers are skeptical that deadline is feasible.

“Transphobia and unfounded anti-transgender policies and laws are still abound and must be ultimately eradicated,” Freedman-Gurspan said. “But courageous strides forward are required to reach that reality, especially to inspire hope to the next generation of transgender leaders waiting in the wings. I firmly believe that turning points, such as today’s Senate confirmation vote for Dr. Levine’s appointment, are powerful indications that this nation is truly heading down the pathway to lasting transgender equality.”

Although no senator objected during the confirmation vote to Levine’s transgender identity, Sen. Rand Paul (R-Ky.) during her confirmation made a point to question her about “genital mutilation” with inquiries designed to stoke anti-transgender animus. Levine remained poised and said she’d be willing to answer Paul’s questions outside the hearing room.

Ruben Gonzalez, executive director of LGBTQ Victory Institute, said in a statement Levine’s successful confirmation is “an exciting, profound moment” and all the more important after Paul’s attack.

“While a bipartisan majority of senators voted with the best interests of our country in mind, a minority prioritized anti-trans hate over an honest review of Dr. Levine’s qualifications,” Gonzalez said. “Their vote to ride the extremis political winds of the moment will be judged in time, because history never looks fondly on those who vote on the side of bigotry.”

Previously, Levine was Pennsylvania secretary of health, a role foe which she was confirmed twice by a Republican-controlled state Senate. Levine is also a professor of pediatrics and psychiatry at the Penn State College of Medicine.