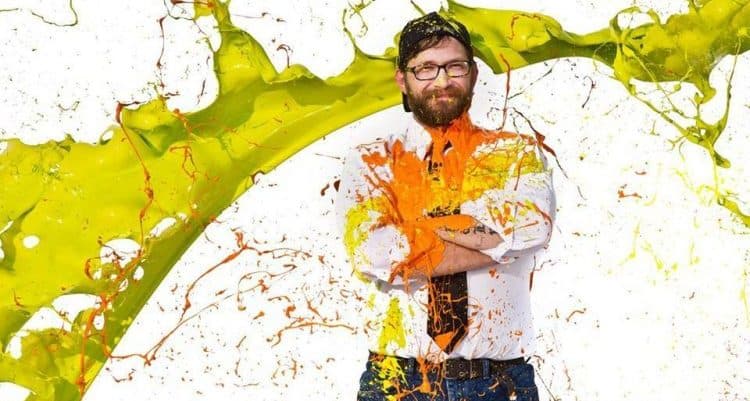 Ask Georgia’s own Leonard “Porkchop” Zimmerman, an Augusta native, what it was like having his life turned into a film, and the answer he provides is “weird.”

“Originally … I kind of didn’t want to do it,” Zimmerman told Georgia Voice. “After thinking about it and speaking with some close friends about it, it was like, if my story could help somebody going through loss or battling with stuff, then it would be stupid of me to not do this. Pardon my French, but I lived through some heavy shit and I feel like I came out the other side a much better person.”

“Happy: A Small Film with a Big Smile,” is the opener at this year’s Out On Film festival, screening at 7 p.m. on Sept. 28. “Happy” tells the story of Zimmerman losing his partner, Brian; his ways of coping with the loss; and ultimately the creation of an art campaign of the same name that’s taken the world by storm — or, well, by yellow robot sticker.

“I thought it was just going to be about the yellow sticker and robot with a posse, but it’s kind of my biography,” Zimmerman said. “Everything it took to get to where I am today and how basically I worked myself out of a hole. I’d pretty much lost interest in anything and had to completely start over.”

Film director Michael Patrick McKinley approached Zimmerman after hearing him do a TED Talk and share his story in that venue, which Zimmerman said was much more nerve-wracking than sitting in front of a single camera for the movie.

Zimmerman will be on hand for Out On Film, along with 600 commemorative Happy buttons, featuring the robot illustration that inspired the movie.

“It’s no secret that I thought I’d met the man of my dreams, and then he fell ill and died and my life kind of completely fell apart,” Zimmerman said. “This isn’t in the movie, but at one point it was late one night, I yelled to God to take me out. There was silence. At that moment, I was kind of like, he doesn’t care enough to take me out, so something still has to be done.”

The yellow Happy stickers Zimmerman created in 2012 now appear all over the globe, including one in Iceland and some in Japan, given to Buddhist monks.

“The whole Happy campaign is bringing a little more cheer into the world,” Zimmerman said. “It’s just to make people smile. … People don’t realize that I’ve lost a partner or have come from a very dark place, but if I can share a smile with somebody — it’s scientifically proven, a smile is contagious.”

The Happy campaign almost came to a screeching halt last November, however.

“When 45 became president, that day I was in a daze,” Zimmerman said. “I’m stopping doing Happy because if I’m not happy, there’s no need to lie about it. Then I was like, wait a minute. This is exactly when we need Happy. This is when I up my game.”

And though Happy isn’t political or religious, he’s put more into the campaign since the election.

“Life can really suck at times, but I’m glad I’m still here because I see every day, there’s so much more worth being alive for that at the time I couldn’t see,” Zimmerman said. “I take the time to watch the sunsets and look for the bears in the clouds. There’s so much good in life, even though there was a time I didn’t think there was anymore.”

“I still miss my Brian. But because some good has been able to come from this, I think it shows the resilience of people if we tried,” Zimmerman said.