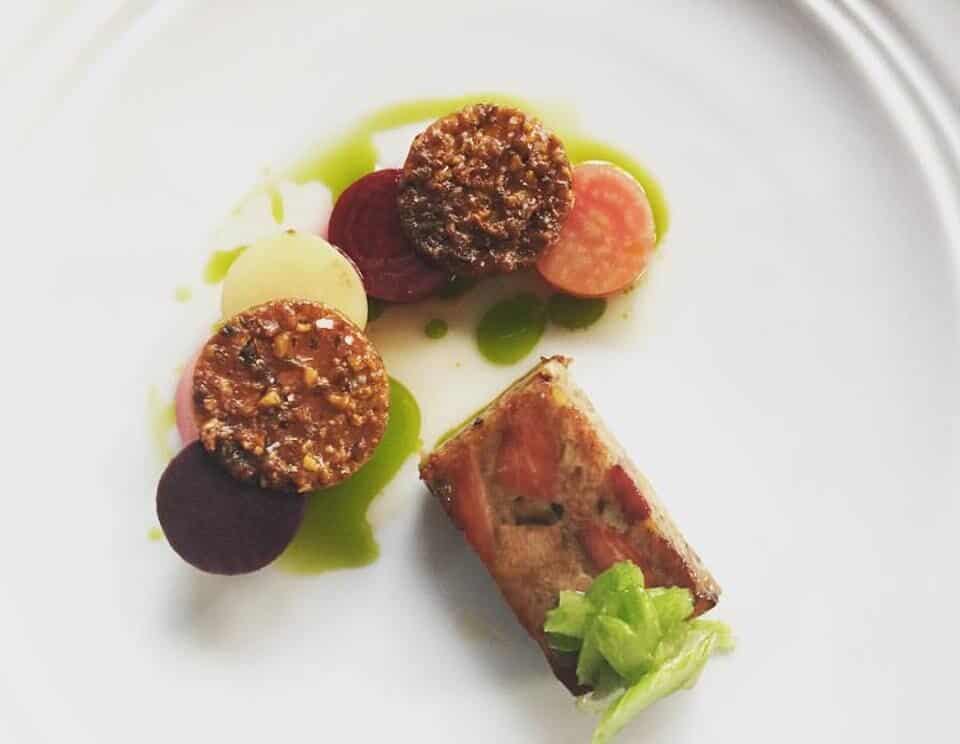 Staplehouse, six years in planning, has finally opened in a 100-year-old brick building in the Old Fourth Ward (541 Edgewood Ave., 404-524-5505, www.staplehouse.com). The restaurant is a groundbreaker in several respects—from its heartfelt purpose to its brilliant cuisine and unusual business style.

Let’s start with the latter. Staplehouse offers two basic dining options. The big attraction is a prix fixe, five-course tasting menu for $85 in the main dining room. There’s a separate (considerably cheaper) a la carte menu served on the restaurant’s sheltered patio. You can order either way in the bar area. Finally, to reserve a seat for the tasting menu, you have to go online and buy a “ticket” from Tock (www.tocktix.com). No reservations are accepted for the bar and patio. It’s strictly walk-in.

Staplehouse is owned by Chef Ryan Smith, his wife Kara, and her sister Jen Hidinger, who originally planned the restaurant with her husband Ryan Hidinger. He was diagnosed with cancer in January 2013 and died a year later. In the interim, the restaurant community rallied to support Hidinger, creating The Giving Kitchen, which provides financial assistance to hospitality industry employees in crisis. The net profits from Staplehouse benefit The Giving Kitchen.

So this is an innovative restaurant with a big heart. Chef Ryan Smith’s brilliant approach will seem hellish to some and paradisiacal to others. The five-course tasting menu, which changes biweekly, is interspersed with several amuse-bouches. One, which I think is particularly characteristic of Smith’s wit and genius, was a “soup dumpling” that was actually some grilled bologna streaked with mustard seeds and pureed white bread. Pop it in your mouth and get a blast of bologna broth.

A typical course was my fi rst one. Imagine sunchoke custard and smoked sable fish, chips of fried sunchoke peels and fish skin, aromatic with juniper and glistening with a foam made of the whey from housemade ricotta. Dig into a plate of shelled razor clams about a dark globe of kale filled with gold rice and fermented bok choy. That licorice flavor is fennel powder. Those puffy crouton-sized crackers are benne. Meat eaters will swoon if they get a chance to sample ribeye cooked sous-vide and surrounded by two varieties of sweet potatoes. Look for nasturtium petals on your plate of carrots and duck confit. Dessert might be a composition of candied squash and apple, sorrel leaves and milk jam.

Each course is gorgeously plated, brought to the table with a flourish by well-informed, personable servers. You really need to try it. If you don’t want to spend $85, you can dine remarkably well on the patio for less than half that.