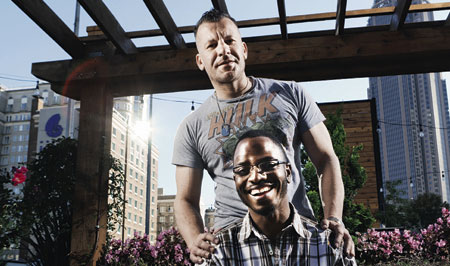 Scott Pasfield’s “Gay In America” is a beautiful coffee-table photo book with an ambitious goal: shatter stereotypes by photographing gay men from all 50 states, while also including their first-person accounts of their lives.

Released Sept. 27 by Welcome Books, “Gay in America” consists of 140 gay men, all of whom responded to a call for photographic subjects. They encompass a range of ages and races, creating a colorful portrait of 21st century gay life.

Their stories are as compelling as their images — no coincidence, according to Pasfield, who will sign copies of the book Oct. 27 at Atlanta’s Outwrite Bookstore & Coffeehouse.

“I decided who to go photograph based on their story. … Their story had to ring true to me and it became very clear right away who was right for the book and who wasn’t,” Pasfield says. “It hit me like over the head like a ton of bricks.”

Of the 140 men, five are from Alaska and seven from Georgia, including three from Atlanta.

Several of the subjects from around the country describe themselves as men who “happen to be gay.” The description may show that while outsiders think of gay men as defined by their sexual orientation, these men themselves are much more complex, Pasfield says.

“I think so many people in society want gay men to clarify themselves or distinguish themselves from the rest of society nearly by that one sexual trait. Because I’m gay therefore that defines me,” he says.

“I think so many gay men when asked what truly defines you as a person and what wisdom would you like to share with young kids who are struggling with being gay or closeted adults, a lot of them have that response. ‘I am so and so of a person. I have these interests and I went through this and I overcame it and I just happen to be gay. That’s not the whole reason why I went through all of these things,’” Pasfield continues.

Thanks to the Internet, the book is broader and more diverse than it would have been 20 years ago, the photographer says, because he was able to reach gay men who may not take part in specifically gay organizations or bars.

“The thing that surprised me the most is the regularness of all these guys… I was really able to connect with a lot of gay men that are for the most part under the radar and what most see of the gay community,” Pasfield explains.

The stories told in “Gay in America” may help others find acceptance for their sexual orientation, and Pasfield says they helped him make peace with being condemned by his own father for being gay.

“There was always a little part of me that felt it is wrong just because my father disapproved so much of it until he died,” he says. “That was something very difficult for me to get over…

“And the wisdom that these other men brought to me in their lives … made me realize I’m doing okay and I’m a good person and I’m like everybody else,” Pasfield continues.

The photographer’s next project may be a similar collection of photographs of lesbians, a project he wanted to undertake earlier but felt that women did not trust him as he was not a part of their community. “Gay in America,” he hopes, will show his sincerity and pave the way for women to feel comfortable sharing their stories.

“There’s even more stereotypes with lesbians that exists from society’s cultural viewpoint than with gay men. I think they need a book like this to show the normalcy,” Pasfield says.

He has heard complaints from some women that “Gay in America” was exclusively male.

“It deeply resonates within me,” he says. “I feel a certain responsibility to try to do the same thing with women now.”

Top photo: Atlanta residents Rob and Keith are two of the 140 gay men featured in the new photograph book ‘Gay in America.’ (Photo by Scott Pasfield, included in ‘Gay in America’)