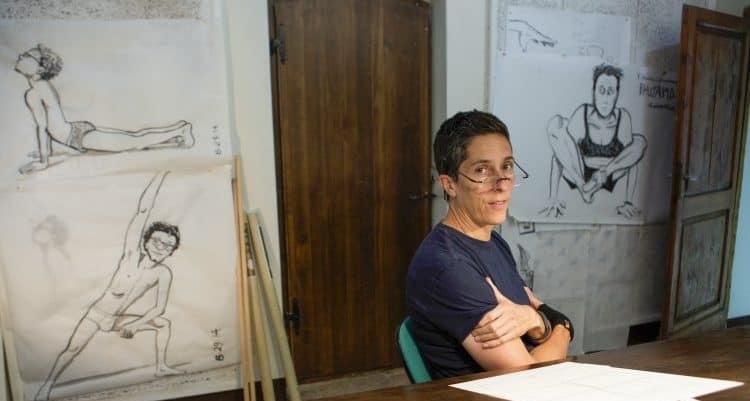 Lesbian cartoonist Alison Bechdel on ‘Fun Home’ success, return of ‘Dykes to Watch Out For’

For all her newfound commercial clout, it might seem strange that Alison Bechdel recently returned to her less-mainstream roots.

Even though her self-proclaimed “tragicomic” novel “Fun Home” has become a Tony Award-winning commercial smash, and is on its first national tour, Bechdel couldn’t ignore her despair when Donald Trump was elected president. Attempting to process the startling outcome, the Vermont-based graphic novelist sat down to draw the iconic characters from her popular “Dykes to Watch Out For,” which was first published in 1983 in a feminist newspaper, WomaNews, before being widely syndicated to outlets across the US.

Within that time, she released two graphic novels: 2006’s “Fun Home,” about her father’s gay secret and her coming out, and its 2012 companion piece, “Are You My Mother?” In 2014, Bechdel was the recipient of the prestigious MacArthur “Genius” Grant.

Recently, the 56-year-old artist talked about getting back to the lesbian characters that first endeared her to LGBT audiences decades ago. Moreover, she discussed her doubts about “Fun Home” becoming a Broadway musical and the pressures of critical and commercial success.

What was your first thought when you heard “Fun Home” was getting the musical treatment?

My first thought, honestly, was, “That’s impossible. Yes, I’ll take your option money, but good luck.” I did not know much about musicals or the stage at all, and it just seemed like a crazy, complex book. Of course, they left out large parts of the book as one has to do, but in the early days, I just couldn’t imagine how that would be put on a stage. Also, because it’s just so dark and so sad, it seemed like the antithesis of a musical.

“Fun Home” opened off-Broadway in 2013 at New York’s Public Theater. When did you first see it, and what was your initial impression?

The whole process took years, but the first thing I saw or heard was at the end of 2010. I got a script in the mail and a CD with music on it from a workshop they had all done that I didn’t see. Up until then, it just seemed like a fantasy that may or may not happen one day. But when I heard those songs, I was just blown away. It was really powerful, and very few of those actually made it through to the final musical. There were so many songs that came and went, but I knew that they had something really magical happening.

No, I never did! (Laughs) Not that Broadway ever took up any space in my brain at all, but yeah, it’s pretty surprising all around.

How do you process the mainstream appeal of “Fun Home” and its resonance beyond the LGBT community?

I guess it’s just really a picture of what’s been going on in the culture, and my story and the play came along at this particular juncture when people were finally open to hearing a queer story that’s also a human story. There was finally space for that. I think if the play had come out a little sooner, if the book had come out a little sooner, it might not have caught on the way that it did, but somehow people were ready for it.

What kind of influence does the mainstream appeal of “Fun Home” have on your current work?

I feel a bit like there are more eyes on me than there used to be. (Laughs) I used to be able to work free of that sense of anyone waiting for my work. So, I feel like there’s a little added pressure now, but I’m trying to use that in a positive way, like to motivate me.

How’s the fitness memoir coming along, then?

It’s coming along. I’m not as far along as I’d like to be. I’m juggling a lot of different projects, so it’s hard to stay focused, but it’s coming, you could say that.

Are these projects you’re working on graphic novels?

Oh, some of them. I’m doing a lot of big stuff I can’t really even explain.

Do you ever plan to revisit the characters from “Dykes to Watch Out For?”

Funny that you should ask that, because right now I’m just so distraught over the election that the only way I could see out of it, the only way I could help myself figure it out, was to start writing a “Dykes to Watch Out For” strip. I haven’t thought about these characters in eight years, but I’m right in the middle of writing an episode and kind of dragging them all out of storage.

I can’t think of a better and worst time.

I know. (Laughs) I don’t know if I’ll keep it up, but I’m definitely writing at least one episode. I’ll put it up online. I’ll do it for my local alternative weekly and put it on my website.

Why did this feel like the right time to revisit these characters?

When I wrote the comic strip, I did it in some ways just for myself to figure out what was going on in the world. I always found the world so confusing and baffling, and by using my characters and having to talk through stuff that was happening in the world, I could find my own way. I felt like – I’m so confused at what just happened to our country that I needed to sit down with these characters and figure it out, so that’s what I’m doing.

Will you continue working with these characters?

I might not have time, but maybe I’ll have to keep going. 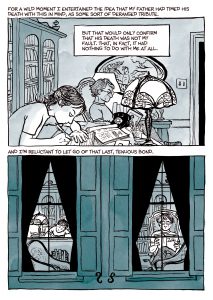 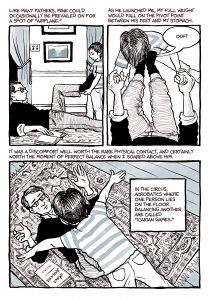